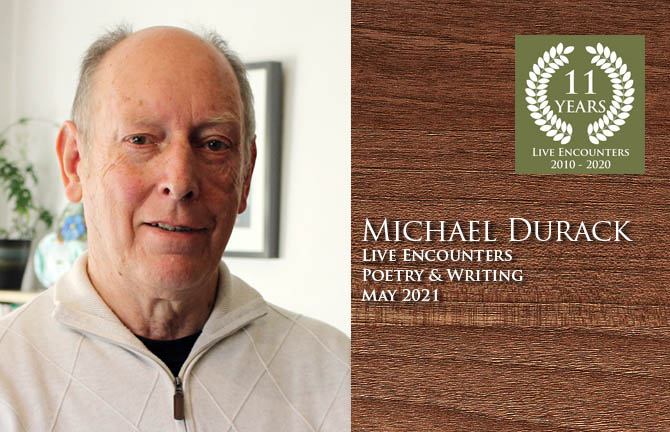 Michael Durack lives in Co. Tipperary, Ireland. His poems have appeared in publications such as The Blue Nib, Skylight 47, The Cafe Review, Live Encounters, The Honest Ulsterman and Poetry Ireland Review as well as airing on local and national radio. He is the author of a memoir in prose and poems, Saved to Memory: Lost to View (Limerick Writers Centre 2016) and with his brother Austin he has recorded  two albums of poetry and guitar music, The Secret Chord (2013) and Going Gone (2015). His first poetry collection, Where It Began, was published by Revival Press in 2017 and a second collection, Flip Sides, has just been launched by Revival.

On his deathbed my father remarked upon
the hardness of my hands enclosing his,
repeating the mantra, “Your old hard hands,”
still baffled that a life of pen pushing
had failed to plane the coarseness out of them.

Today he’s nineteen years in the grave
and I contemplate the still unyielding hands
bequeathed to me by farming forebears,
Duracks and Guerins, Clearys and Gildeas
who milked the cows and followed the plough,
and from the maternal limb of our genetic tree
tradesmen and herdsmen, Moroneys and Hayeses.

Raised a middle child of three, all sons:
the youngest coarse-palmed like myself,
having been a farmer all his life;
the eldest with calloused fingertips
from countless years caressing a guitar;
the stiff handshakes with which we greet the world
belie (we hope) the softness of our hearts.

The third month of the calendar, a dangerous one,
in like a lion, out like a lamb, many weathers.
Caesar was butchered on the Ides of March,
Christ crucified on its Nones.

St Patrick expired on the 17th, the anniversary
(so the Biblical chronologists say)
of Adam’s farewell to the Garden
and Noah’s maiden voyage aboard the Ark.

The Covid waves washed over us in March,
leaving our arks at anchor, our airships grounded,
our garden gates slammed shut in our faces.

Romeo on the doorstep

A Georgian terrace on Rathmines Road;
a love-struck Romeo ringing the door bell
of his unresponsive Juliet on the third floor.
The faint buzzing tickles our ears on the fourth.

Silence. Then Romeo, throwing caution
to the wind, fingers a raucous serenade,
playing the bell buttons like an accordion.
The house in uproar, we open our window,
shout “Go home to fuck!”and pitch out
a basin of water to dampen his ardour.


Half a century ago. The dousing did the trick.
But, Romeo, after all this time, no hard feelings.
I hope your heart got mended. And, Romeo,
wherever you are, I hope your suit got dry.

The pomegranate was pressed into my hand
in a sleeper carriage aboard the Red Arrow
speeding from Moscow to Leningrad.
It was neither gift nor robbery, an exchange
for a chocolate bar of pomum granatum
from a businessman out of Azerbaijan
to a wide-eyed tourist from Tipperary.
The fruit, looked like it had seen better days;
its flesh remained unbitten, its seeds undigested.
Persephone might have escaped Hades
had she been offered my pomegranate.

Back then I was not au fait with the myth
that spawned the seasons, balanced life and death.
I had no cause to fear for daughters
drawn to lines of daffodils on our lawn
hugging the little stream that might have been The Styx
but likelier would become the Irish Sea.