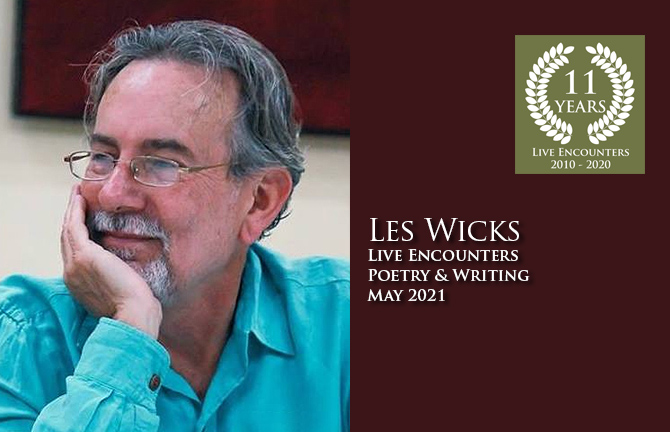 Over 45 years Les Wicks has performed widely across the globe. Published in over 400 different magazines, anthologies & newspapers across 32 countries in 15 languages. Conducts workshops & runs Meuse Press which focuses on poetry outreach projects like poetry on buses & poetry published on the surface of a river. His 14th book of poetry is Belief (Flying Islands, 2019). http://leswicks.tripod.com/lw.htm

Love is the answer.
Try that argument
in the camp on the Turkish border.

Beneath American summers
a woman is losing her mind.
Tax policy has made no difference
& healthcare, well you gotta laugh
or rage.

Every step I’ve taken
has been on stolen land, guilt builds
like soil formation & blood has always been
the best fertilizer so our crops shimmer, vitamins
sizzle in the sun as an ageing world salivates.

We are carp, gasping on the banks
of the river of our own design.
Do I bite, bale
or just flap about uselessly?

This weekend, further up in the hills
a “controlled burn”, “hazard reduction”.
Look down the valley
Perth wears the smoke like some kind of armour.
Like us all, yes it does inhale.

When the petitions arrive, I sign.
Some women aspire to emulate male extremity,
not a moment too soon.
Men are puzzled but there’s a kind of way forward.
First People are changing all that needs to
& Bren is just what the component parts feel —
a person, unworried about gender.

Another march? Do we buccaneers
turn pamphleteer again? Brochures
are no more readable when soaked in tears.

This old carp won’t refuse
any lifejacket offered.
With impotence as the new flag
we compose/decompose at a bright future.

Anchored in the treachery of sand
wearing waves
until the snip of a certain comber
shreds them landward.
They call this weed.

There are people here too
busy in their pleasure
they stare further out
across the stolid hungers of tankers queued
to feed national necessity, rapacity.

Boardriders have learnt
those arts of waiting.
One child, one gull, the pantomime of chase.

What comes next?
No point to paint anxiety
on that small forest of eelgrass.
That’s ours to bear, our curse.

A granite breakwater, that construct built on collapse
is the human pretence of permanence
a theology of safety…
that most friable of gods.

Below the surface
hardier energies persist.
Though lifeless, sand has its ructions.
Waves bustle in the frenzy above
they too are ignorant of the one before, the one after.

Deluded in the shifting breeze
(that is a life in itself)
one placid pensioner
will not go deeper than his knees.
He is content in the fake permanence beneath his feet
that is neither loyal nor solid
as it buries abandons undermines
all that is somehow held to be true.

Despite this morning’s poorly named downpour
there is no falling at the waterfall
no pooling at this pool.

This day both placid &
adamant alongside unapologetic winter — 25°.

I wish I could leave words to other people
me lacking both the succinctness of wandoos
& the promiscuity of the breeze.

A 10-year-old is shepherded past —
it’s the worst walk I’ve ever had! But
I just wait for the viral silence to return,
my reliable page.

The rust & glower of stonefell.
Staunch mantis green concedes to worn linen
shade rations itself
& is infested with ants.
Does the shrike react when I say it is elegant?

But there are shoots everywhere…
a cuneiform of life
beneath notice, against the odds.

I am thirst
& trespass.
One cannot plough the scrub into linebreaks.
Could sow all the words I have
& the magpies would still think themselves free
or at least have no notion of a cage.


Envelopes won’t seal the wounds,
feet haven’t got the rhythm
& my sweat is tasteless.