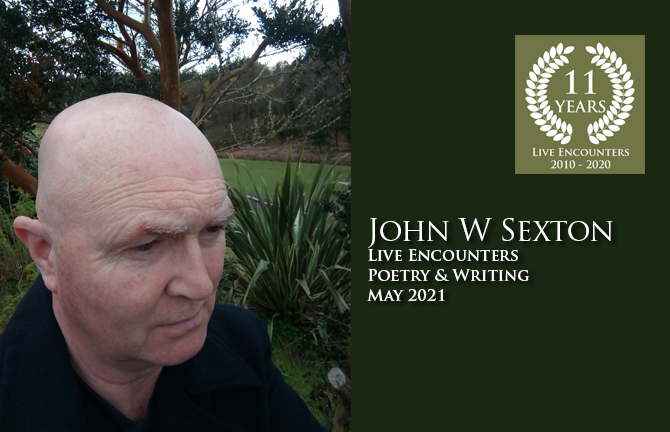 John W Sexton’s poetry is widely published and he has been a regular contributor to Live Encounters. His sixth poetry collection, Futures Pass, was published by Salmon Poetry in 2018 and a chapbook of surrealist poetry, Inverted Night, came out from SurVision in April 2019. His seventh full collection of poetry, Visions at Templeglantine, came out last April from Revival Press. His next collection for Salmon Poetry, The World Under the World, is forthcoming. In 2007 he was awarded a Patrick and Katherine Kavanagh Fellowship in Poetry.

The grey London sky breaks into seagulls. Dad says
they are the River Thames and I think I know
what he means. He says we’ll go to the River Thames
on Sunday. Sunday comes and dad says, here we are,
this is the River Thames. There are cars driving and
traffic lights and people walking on the river. No,
says dad. This is the bridge, the river is below us.
Then I see it, green and grey and brown and in a temper.
There are boats in it and then seagulls everywhere.
I tell dad a boy hit me in school. Hit him back,
says dad. I can’t, dad, he’s bigger than me.
Everyone is bigger than me. Hit him back
or find a way to hit him back, says dad, or
it will go on forever and he’ll keep hitting you.
Dad says this like it’s the best help ever.
We go home. I have a grey Airfix airplane
because I can’t paint it. Dad is too busy to paint it
so it stays grey. It looks like a seagull.
A little pilot is sitting inside its head. They
are the River Thames. I play and play with
the River Thames until bedtime. I wet the bed.

The boy hits me again. You smell like piss, he says.
Another boy hits me, and then another. You smell
like piss. You’re a Piss Boy. I cry and a teacher
in the playground tells me to stop making a fuss.
I have an elephant in my pocket. He was part
of the Jungle Set with a lion and a camel and
a palm tree. The elephant is strong. I receive
elephants. Receive is a word mum uses. It’s a word
from Mass. One day you will receive Jesus, says mum.
I decide instead that I will receive elephants. This
elephant is strong. He is grey like the River Thames.
He has a loud trumpet sound. He is making the loud
trumpet sound in class but no one can hear him.
He is running very fast through the jungle with his
funny clumpy stiff legs. I am laughing at his funny
run. The teacher asks, John Sexton, what
are you laughing at? I tell the teacher that the elephant
is running through the jungle. I tell her that I am
receiving elephants. Everyone in class laughs.
I have to go to the front. Put out your hand, she says.
I lift out my hand and show her the elephant.
She takes the elephant and puts it inside her desk.
I get two slaps of the ruler. I pretend the elephant
is still in my hand but the ruler stings. I never see
my elephant again. Another boy says, that is my
elephant, Miss. John Sexton stole my elephant.
I cry and the teacher says stop making a fuss.
All the other boys say it’s true. That I stole the
elephant. The teacher gives the boy the elephant.
That night I play with the River Thames again.
The pilot visits the elephant but says he won’t come
back. The elephant is going to stay with that boy.
The lion fights with the camel. The palm tree
watches. The palm tree is the jungle. I wet the bed.

End of summer I split dandelion clocks
with my breath. How many dandelions become
from a dandelion? I am eight. Then I’m nine
and it’s summer. The dandelions are only
a summer old forever. Then they think themselves
from their heads and colour the sky white
with their spokes. Then Christmas. The sky is black.
There’s rain so much it’s pouring inside everybody.
Mum and dad have thunder and lightning
and there’s an argument. Dad takes the nut cracker
and breaks open a walnut. There is no nut inside,
just a small unformed thing that looks like
a shrivelled baby. I eat it and swallow it anyway,
and dad laughs and says, I bet that tasted like bird shit.
I look carefully at the inside of the walnut shell.
It is full of empty rooms. I get an idea.

The room that the baby walnut was in is haunted.
There’s a lingering feeling like a sadness.
I do not go into that room. That room still belongs
to the tree. I have no idea what walnut trees look like,
but I know the shell of the walnut is still connected
to the tree it came from. One day, I think, I will travel
to that tree. I choose a room near the centre of the hollow
shell. I join the two halves of the shell in my mind.
I am now standing in darkness. The shell will
take me. I think myself to the railway embankment
between Hornsey and Harringay Stations, right behind
my friend Liam’s house, where there’s a secret slit
in the fence. The sloping bank is blinding with snow.
The canal that runs alongside is frozen. But it’s the winter
before, when Liam Gray dared us to go there. I can see
both myself and Liam, but they cannot see me,
for I’m as small as a maggot. I see myself tread through
a nail buried in the snow. I am screaming with pain. My right
footprints hold dots of blood at their centre. Liam says
if the rust in the nail meets the iron in my blood then
I’ll die of rust. I know what is going to happen,
for it has happened already, so I go back inside
the walnut shell and open my eyes. The one-bar
electric fire in my room glows bright red but I still
feel the snow gone through me, still feel the nail
in my foot of a year ago. I had limped home that day,
terrified I would die of rust. I told dad when I hobbled
through the door. He said there was a fear of me arse,
but then he laughed and tousled my hair. I knew then
that I wouldn’t die. I’ve already been to all of these pasts.
I want now to go to the future, but when I try, the future
won’t let me in, is a grey blizzard like the static noise
of the television. Instead I travel to the bottom of the sea.
It is dark inside the shell and colder than the snow was.
My feet are wet and suddenly I realise that the shell is leaking.
If I open the shell I will drown. I go back home straight away.
I want to go to space now, but then I think that space might leak
into the shell as well. There is a sharp taste in my mouth,
as if the ghost of the empty room is now inside me.
I don’t want to travel in the walnut shell anymore.

That night I dream of the dead baby walnut that I swallowed.
The baby walnut is floating in front of my face, bright
as a ladybird. Then she flits into my ear and says,
Follow me, follow me, don’t be scared. The walnut shell
is our flying house. Dad set me free when he cracked
it open. And he let you in at the same time. You did not
spit me out, you swallowed me safe. You kept me. I wake up.
The bed is dry. I go to the window. The garden is full
of moonlight. I look up into the sky and suddenly there’s
a shooting star. It falls quickly towards Turnpike Lane.
I go back to bed and sleep. I dream of sitting on a cushion
inside the walnut shell, and the baby ghost is with me.
Now she has wings and really is like a ladybird, but
her colour is back-to-front, her body black with red spots.
She flies about and about, talking talking. Talking talking.
Everyone goes to the future, it’s just waiting there.
No one goes back. So go back go back, go back. Go back.
And she just flies about and about, talking talking.
Then it’s morning and I wake up. But she’s still talking.