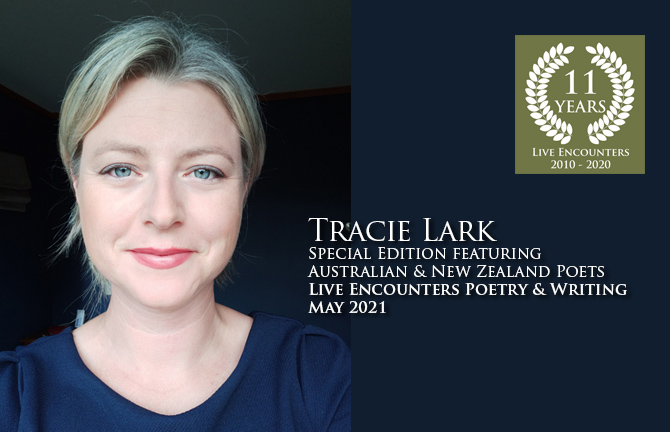 Tracie Lark aka The Literary Gangster is an Australian high school English teacher living in the native bushland of New Zealand. Tracie’s poems Hell’s Gate and My Elegant Hoon are published in Irish Literary Journal The Blue Nib, her poem Ancient Beauty is beautifully presented in the Australian Earthwords & Artlings Anthology, and Burn and Twirl features in Curiouser Magazine’s inaugural issue. Her poems, Sunsets With The Edgewalker, Stand On A Limb, and Tell Me You Love Me are published in Northland New Zealand’s Fast Fibres poetry anthologies. Tracie often ponders the idea that what is light is also dark, and so this is often reflected in her poetry.

You tucked away all of his secrets
inside of you

his toxins release into your bloodstream
occupy your brain

We watch you fade amongst the sands of time
sands which, when the wind blows expose
the caps from the bottles he drank
the lighter from the fire of lies he set upon us
and the heirloom plastic comb he used to brush over the truth
as I plead against the family motto with ignorance is amiss.


You slipped away from us all
inside of you

the way an albatross corpse decays revealing
the trash which consumed it.

the sky, a tomb,
with pregnant moon –
might set before time’s due

dampened by the darkest blue
waning womb, and lover, you,
I will tell you goodbye

and I will settle then soak like dust
in to the core, melt away
with magna unless, your heart

another narrative
another ending
another path

like a dyslexic love
an ecliptic judge
a chrysalus mother

born but stuck
in the cocoon that
hangs from the moon