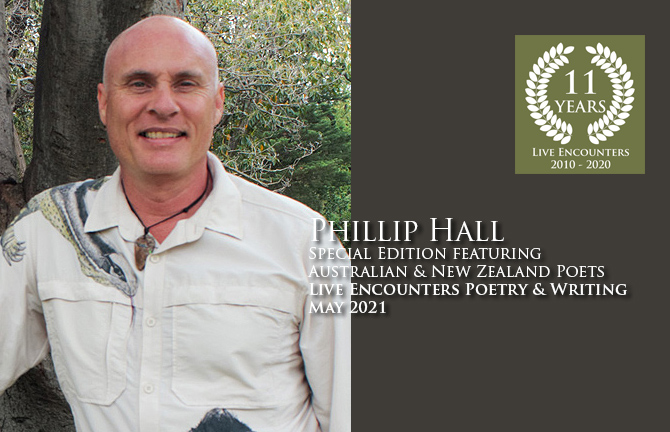 Phillip Hall worked for many years as a teacher of outdoor education and sport throughout regional and remote Australia. He now resides in the Melbourne suburb of Sunshine where he is a passionate member of the Western Bulldogs Football Club. Phillip’s poetry, essays and reviews can be seen in such spaces as Best Australian Poems, The Blue Nib, Cordite Poetry Review & Plumwood Mountain while his poetry collections include Sweetened in Coals (Ginninderra Press), Borroloola Class (IPSI), Fume (UWAP) and (as editor) Diwurruwurru: Poetry from the Gulf of Carpentaria (Blank Rune Press). Phillip co-publishes the poetry e-journal, Burrow, at: https://oldwaterratpublishing.com And his brand-new poetry collection is Cactus. This can be ordered at: https://recentworkpress.com/books/product/cactus/

…troweling through that God Almighty squabble
in a cross-sectioned trench that exposes
me, stretches of incorporeality
from now, back to conception and beyond
through all those Scottish/Jewish tradesmen and housewives (so righteous
despite the odd weed) with the occasional
rabbi and hell-fire-and-brimstone
Jew-for-Jesus thrown-in – what a jam
of blood

Finally reading Fagles’s verse translation of
The Iliad (about time
the godly complaint) where a fairytale castle is studded
with coriander, cumin, rose petals, saffron and gold
and, while one young prince is obsessed with his
apples and all those glistening
love locks, another is the bulwark of shining nobility
but still, both are grassed
and placed at the head of a very long queue
where all are offered
the agonies of spilt brains and shaming
throbbing chants


Given by Gods
to black clouds of grief, shackled fast
to panic and taunted by years
of agony all for their terrible beauty –
and Gods mutter amongst themselves

Flattened by these storm-cloud theologies
that shoulder crests, wave upon wave
surges of strife
tearing bronze; godly hordes of unceasing
vortex massing like flies over the holy aura of the hill, and from heaven
earth-shakers loosen disaster
where the sabotaged and judged
are weighed down…

(after Michael Scott’s, Who Were the Greeks? SBS TV)

We hear him
quote J.S. Mill that Marathon is more important
in English history than Hastings, a conquest column
inscribed along a bronze helmet’s rim
where victory odes gloat
in vinegar and blood broth
and those bitten by defeat
are forced to slink down alleys, shunned
like defect babies, where even the sacrifice
of dogs can’t purify; and pankration wrestling is cryptic
prophecy where those disarmed
fight to the death; and drunken
centaurs and giants, in Persian dress, row
into the confusion of the straights
while above it all the Panathenaic Way
is a sacred olive branch gorged
on marble dust,
and gods are the spoils
of all our arts as a gold wreath rises
with the Parthenon in technicolor riot
over the humdrum; this is his television
radiant in the perfect proportions
of the male nude, but for women
a veil is worn,
while he casts the goddess
troublemaker, and his regret
is being blown off course
from the sanctuary of Apollo
at Delos where a monument to Dionysus
is armed as a good luck phallus.