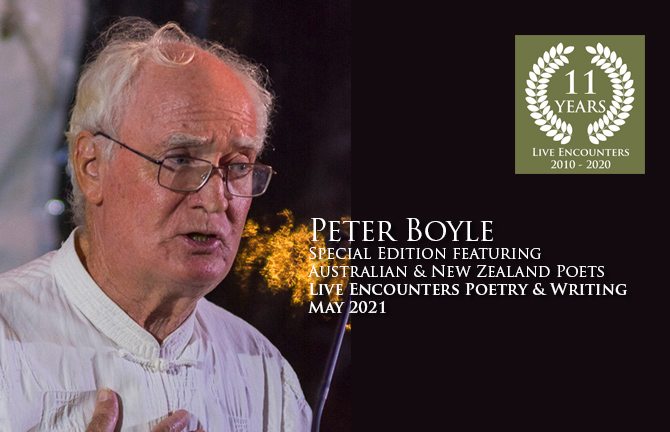 Peter Boyle is a Sydney-based poet and translator of poetry. He has nine books of poetry published and eight books as a translator of poetry from Spanish. His most recent collection is Notes Towards the Dreambook of Endings (Vagabond Press, 2021). In 2020 his book Enfolded in the Wings of a Great Darkness won the New South Wales Premier’s Award for Poetry.

Three poems from ‘Ideas of Travel’

You come with your request list —
it is overwhelming most of all
because it is blank —
infinity is blankness.
Hunger would be too easy —
love, remembrance banal, no better
than all the simple asks:
that the purple blossoms of the jacaranda
should stay all year; that summer
should hold you so tightly
you would go on breathing its fragrance
beyond death.


The infinite blankness
of the page you are holding
shines, awkward and alone,
in its own space.
And the poem you and I are writing now,
on our separate sides of the void,
glitters as impossibly as silence,
beyond the rim of vision at first, casually there
like a leaf travelling down through the sky
in its perfect, once-only
trajectory.

I was riding over the snow
when the bell began ringing. The bell the monks tend
in the depths of the river. I was in a carved
wooden chair with enormous wheels
that moved all by itself. Alone in the nowhere space
where the trees are gaunt candles
blazing with silence. I was fleeing
the life of my former body
and a long way still from
the life to come.


And the bell rang clear, once only,
from somewhere under the ice —
from a cave where my ancestors dwell.
At that moment I heard the scrape of a quill
making its way across an infinite
scroll of parchment. Inscribing
the story of a journey several lifetimes ago
to the earth’s surface.
Perhaps the chair I was in would take me
to see my ancestors. And meanwhile
the small silver bell sounded again,
announcing the end of daylight.
From every horizon the snow closed in.

Music for the five princesses
at the court of the Great Shining:
they know all the moves of the dance,
the stately steps, the perfected gestures
of eyes on midnight stairwells;
they know the spinning floors
multiplied across mirrored ceilings,
the different meanings feet shape
curving under lamplight;
they know the protocols.
Grief they don’t know.

Music for the five princesses
in their wide chambers west of the whirlwind:
they know the arts of the palette,
the subtle tinctures of paints, of perfumes,
the herbarium’s secret grace,
the delicacy of swan song.
Love’s grief they don’t know
and death is a far distant country.