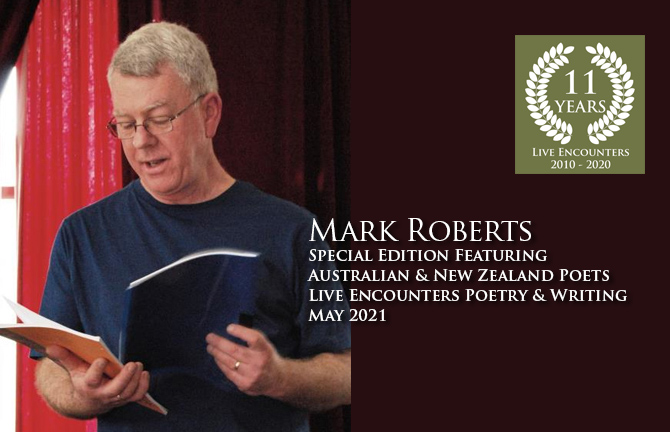 Mark Roberts is a writer, critic and publisher who lives in the Blue Mountains west of Sydney. He is the founder and co-editor of the online journal Rocford Street Review (https://rochfordstreetreview.com/). He has been widely published in journals and anthologies both in Australia and overseas and his latest book, Concrete Flamingos, was published by Island Press in 2016.

flowers move through fever
a dragon emerges
from a painted vase

behind me
dragon tails
disappears
into
delirium

Before she got sick Ida taught me how to shoot
with an old 22 that had belonged to her mother.
A rabbit gun mainly, though years before she
had used it to help clear kangaroos in the top paddock.

Sitting on the back steps facing the sheep yard
she showed me how to clean and oil
the action before handing it to me
and going inside for the bullets.
Always carry the bullets separately to the rifle.
Only ever load immediately before you shoot.


We walked out to the paddock behind the shed.
Set up a row of jam tins on an old plough.
With an unloaded rifle she showed me
how to hold it against my shoulder,
to stand with feet apart, balanced,
moving the weight from the front foot
to the back as the trigger was squeezed.
She stood behind me as I learnt how to aim
squinting down the long metal barrel.

Then she took a single bullet from a packet
in her bag and handed it to me,
talking me through the process.
Click, slide, slide, click.
Taking stance, lining up the jam tin
slowly pulling the trigger
the sudden kick against my shoulder
forcing me to take a short step back.


By the third shot I hit the tin and then it was easy.
I fired off 10 bullets in all and destroyed 5 jam tins.

On the way back Ida motioned for me to stop
putting a finger to her lip. She took a bullet
from the pack, loaded. and aimed at something
near the gate. As she fired a large brown snake
leaped into the air headless, twisting and coiling,
It was still twitching when we got to it, she picked
it up by the tail and draped it over the wire fence.