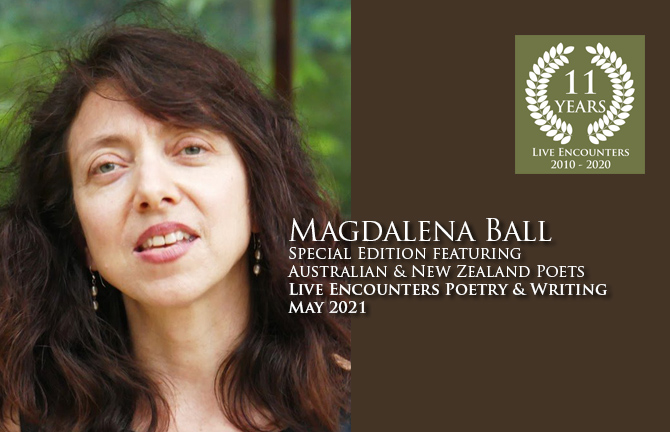 Magdalena Ball is a novelist, poet, reviewer and interviewer, and is the Managing Editor of Compulsive Reader.  She has been widely published in literary journals, anthologies, and online, and is the author of several published books of poetry and fiction, including, most recently High Wire Step (Flying Island Press, 2018), and Unreliable Narratives (Girls on Key Press, 2019). A new book titled Density of Compact Bone will be released by Ginninderra Press in late 2021.

He called her cunt.

The children heard the word
travelling slower than sound
past spoons clanking
the singing and dancing dinner routine.

a fast twist
halted by the thud
of a whiskey glass
the crack of the C, the nasal N
the plosive T.

It hit her like a bullet
leaving a hole
visibly smoking.

She said nothing didn’t
even breathe in.

She thought to herself
“sticks and stones” but her arms
were the sticks; her bones the stones.

Nothing could contain the earthly beauty
of her voice, powerful enough
to shatter glass; to time-travel
to unfurl the trauma of her DNA
to heal beyond the span of a life.

The gift she was born with.
Her brothers taught her
to use it well.

Sustaining notes above one hundred
decibels, sound against resonant
frequency, shattering every preconception.

What she did with it is another story
what didn’t shatter
when she hit the high note.

Passed, not from her mother
whose goodie basket
included a generation of guilt
and the deep-seated desire
to mother the world.

The whole lost neighbourhood
was held in those skinny arms.
Strangers unleashing all manners
of pain, sorrow, loss, which she
sopped up, her body a sponge

The voice was his
a birdsong he recognised
felt the loss of, and mourned
long after the whisky buzz faded
and his body escaped
the prison of lost dreams.

Eva was born into a storm.
Rain blew into the curtains
as she screamed for the first
but not the last time.

Her eyes glowed lavender
before settling to hazel green.

Her need in that moment was great
as it is for all newborns.
Too quickly other needs
outflanked hers.

She learned to read the room
her mothers tears, the ink
of her education.
Her father needed
to be watched carefully.

When the house
was full of drinking
card-playing men
dangerous, bloodshot, aroused
she taught herself to shrink
to fade her outline
slipping in and out of view
like a ghost.


It was a skill she would return to
long after the shrapnel
of her father’s prodigious anger
created scars that wouldn’t heal
for generations, silver marks
on the highway of Eva’s legacy
where the sublimated burst forth
in streams of broken light
reflecting all her father had lost
and all she would
have to sing back into being.