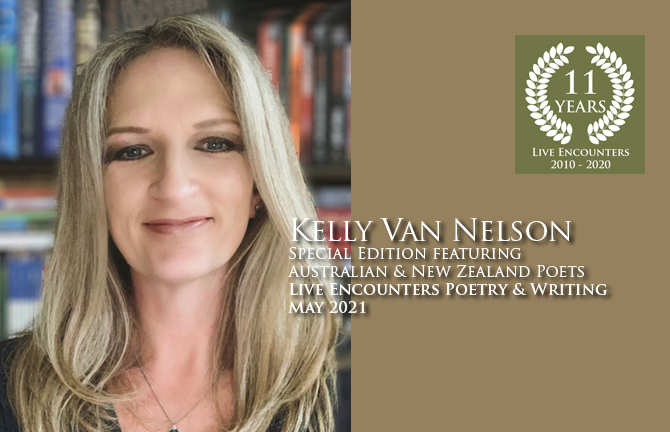 Kelly Van Nelson is the Sydney based #1 bestselling author of six books, including Graffiti Lane, Punch and Judy, Retrospective, and Rolling in the Mud. Her literary work has featured in numerous publications and her contemporary poetry books have been gifted to Hollywood celebrities, including Academy Award winners. She is a prominent media figure using poetry to drive conversation on social issues, including bullying and domestic violence. She is a KSP First Edition Fellowship recipient, winner of AusMumpreneur ‘Big Idea Changing the World’ Award, Roar Success Best Book and Most Powerful Influencer Awards, CEO Magazine Managing Director of the Year finalist and Telstra NSW Businesswoman of the Year finalist. She is also mum of two and the Managing Director of a Fortune 500. In short, she is a juggler. Kelly is represented by Newman Agency and her website is www.kellyvannelson.com.

The streets are empty, no signs of life
except for the movement of last night’s
newspaper blowing in the breeze,
soaked with vinegar and stained with grease
from battered fish and chips that passed the lips
of a young girl hungry for nourishment
of a home cooked meal, settling
for deep-fried sustenance
because she can’t even reach the stove top
to try and warm a tin of baked beans
and nobody ever taught her to cook
because even her mama doesn’t know
how to knock up a meal or read a child
a book before bed, as a parent never
pedigree bred, not adequately well-read
herself.

The streets are shadows
cast down alleyways
with unchartered dark corners to navigate
beside scuttling spiders trying to bait
the innocent into a tangled web of doubt
where the bulbs of lampposts have long since burned out
and the people once hitting pavement no longer go out
because it’s too dangerous to go about
daily business without fear of being mugged of a purse
filled with nothing but a few coins
since unemployment doesn’t adequately reimburse
anyone but the criminals who try to coerce
the bag dangling from your shoulder
as they scare you with the glint of their eye
so far gone from a catcher in the rye,
their innocence lost too soon
to borstal because they set out to steal the silver spoon
always destined to be missing at birth,
coming up empty-handed and red-handed
from nothing but hollow turf
wars.

The streets are unyielding,
concrete slabs trodden on by foot soldiers
marching about their business
in steel caps and fluorescents, earning their keep,
fighting to keep their children asleep
in the trenches between threadbare cotton sheets,
where the union is a weapon in the war
to make two ends meet
and the enemy of debt can never retreat
and is always beat down to a pulp,
stamped out beneath weary feet
trying to avoid falling between the wise cracks
filled with chewed up gum and the pun about the bum
who cannot make a decent living, immortalised
in the past, present, and future-proofed,
labelled with the unforgiving truth –
a dead man walking.

The streets are gold
plated, unabated
treasure, filled with riches beyond the dollar
invisible to the naked eye unable to see
beneath graffitied veneer
the sheer value in being the deer
in the headlights of the luxury vehicle rear
parked in private driveways
petitioning to make the highway
on only one side of the tracks
to avoid unwanted hacks
on their tarmac
from the poor.

The streets are truth,
the harsh reality of have and have not’s,
sunburnt in the harsh glare of neon lighting,
blinking while clinging to hope,
one letter missing, because society finally broke
the flow of electricity keeping life pulsing
through the vein of commoners who will never reign
but are the grain needed to remain sustainable
in this unrecognisable world we have claimed as home
while walking alone along the path to divine destiny
with directions carved by hand
to avoid
sinking
in
quicksand –
I am the streets.