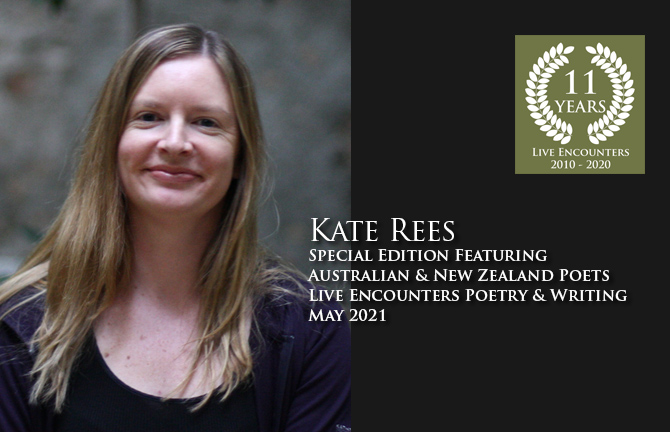 KA Rees writes poetry and short fiction. Her poems and short stories have been included by Australian Poetry, Cordite Poetry Review, in Kill Your Darlings‘ New Australian Fiction anthology, by Margaret River Press, Overland, Review of Australian Fiction, Spineless Wonders and Yalobusha Review, among others. Kate was short-listed for the 2016 Judith Wright Poetry Award and she was the recipient of the 2017 Barry Hannah Prize in Fiction. She was a 2019 Varuna fellowship holder for her manuscript of short fiction and the national winner of the 2019 joanne burns Microlit Award. She is a participant in the 2021 Sydney Observatory residency program, where she wrote both Pixel Fish and Museum Station, the two poems included here as part of a larger work in progress.

Terrance’s fish are in the bucket, the bucket is full the fish lie suspended, stranded. Terrance takes pictures and uploads them for his relatives. He captions beneath a bream (its scale-and-silver skin) the sky is large above the city tonight. He takes his light to the fish and out to blackness beyond the pier’s edge. And the weight of all of that water and the heft of the knife’s wet blade, and the night wrapped around the city, and the chat of others throwing lines out, and the party boats on the harbour with welcome drinks for the invited, and the way the water reaches for the pylons—arms of an implacable child, and the shadows cast from boats moving against the wharves; the odd loose stay tinking a starboard bow. He looks for the moon, the edge is the night. And there, tonight, floating on the water is her white-rippled double—shadow cathedral among the ink-scape; a water’s depth of coldness to press her shadow against. Fish can be heavy and that is a good thing, his thoughts loosen as he casts his line out and reels it in, feeling droplets of water and the signature of nylon pressed into his skin. Slowly his line moves through depth and touches weeds and structures, he feels it as if a sonar broadcasting his intention, the baited anchor with its blooded hope: the catch of little silver.

He returns: his hole-in-the-wall apartment, his one pressed suit hanging on the bedroom door, two white  shirts draped across the back of this chair. He inserts commas in the dark spaces of his life; his laptop, dialogue pop-up, his Aunt: What kind of work is this? The best kind, he types and uploads more fish.

And the waiting for the train on the platform, the fetor of the heat in the late February air, and the heat held your face as the gaze of a lover and the heat on the back of your neck, sweat from the running down at your crown, and the tap of the pulse at your wrist and the throb at the side of your head and air is a lung that moves on the pulse of a train, wind punching down the platform where passengers wait, briefcases / school bags held in hands, and you are running, running, running down the platform to the river where the storm water rushes and I loose off my bag and follow—arms outstretched touching only the hem of your dress, and you lose my grasp at the edge of the bank; that little ledge of time.

I breathe in the smell of backwashed soil. I breathe the churn of the water, the brine of its flow. I see you far out, in the middle of the swirl, there for seconds and then gone. The clutch of water is over my shoes and the liquid spill and chill of it fills me—the sudden press of wet material clasping ankles and mud sticks my feet to the bank so. The river closes and pulls me back to the platform where the train punches into the station. And I am there with a pack on my back, blazer pinned to my shoulders, hunched away from the tunnel breath of the train looking for you among the throng of a crowded station.