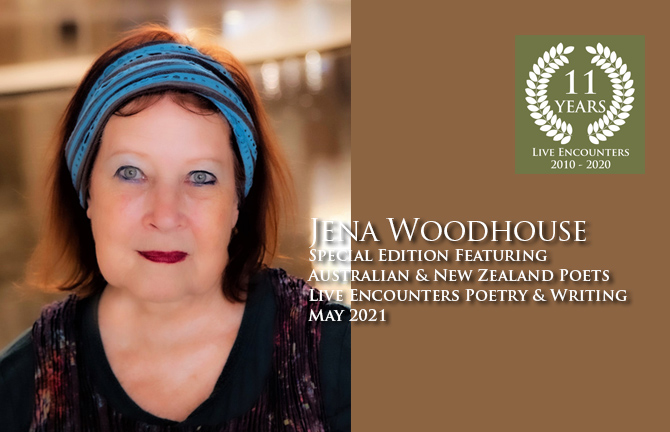 Jena Woodhouse is a Queensland-based poet and fiction writer/ translator/ compiler/ of eleven book and chapbook publications across several genres, including six poetry titles. She spent more than a decade living and working in Greece, lured by her amateur interest in, and subsequent passion for, archaeology and mythology, reflected in many of her poems. Her most recent publications are News from the Village: Travels in Rural Greece (Picaro Poets, 2021), and a re-publication of her story collection, Dreams of Flight (Ginninderra, 2020). In recent years, she has been awarded creative residencies in Scotland (a Hawthornden Fellowship); France (CAMAC Centre d’Art); Ireland (the Tyrone Guthrie Centre, Annaghmakerrig) and Greece (The Australian Archaeological Institute at Athens). Her work, which has received awards for poetry, adult fiction and children’s fiction, appears in many literary journals and has thrice been shortlisted for the Montreal International Poetry Prize (2020; 2015; 2013).

Death of an Archaeologist

For what seems an eternity, a night that has no end,
you slither in and out of consciousness,
unable to steady things, to hold them in your mind,
your grasp; just this dizzying kaleidoscope:
what mattered, or did not – the six-foot bar
you had to clear; the summit that you had to reach;
the snowstorm on Lasithi numbing hands and feet;
beguiled by moonlight at Mycenae, haunted by
the tholos tomb; Egyptian mornings, ravishingly
lovely, on the upper Nile, where Akhenaten
and his queen enjoyed their idyll for a while.

It was always for a while – an icon wick afloat in oil:
happiness is measured by its afterglow against the dark.
Your senses lurch through mountain passes, hounded by
a howling gale, only to feel pain like steel stilettos,
and this pain is real. Wincing at the light, you wonder what
the bitter fight was for, and then you grasp the point of it,
before your senses lapse once more. For liberty, for life,
for love of everything they held in store; your wife,
this land that you will die for soon: a casualty of war.

Workmen’s voices echo on the road toward the Knossos site.
Delirium, not memory, is rearranging time.
Remember, as the pain intensifies – a pincer in your chest.
An urgent rapping juddering the door, peremptory.
Is this the moment that your gods
predestined and prepared you for?


John Pendlebury (1904-1941), a British archaeologist
who continued the excavations at Knossos, Crete
(after Sir Arthur Evans) and was in charge of the excavation
of Akhenaten’s and Nefertiti’s city, Tel-el-Amarna (Egypt),
was wounded then executed by the Nazis for supporting
the Cretans in the Battle of Crete, 1941.

Ever since the killing of Asterion,
the octopus has lain in wait for me.
When slumber takes me, he is there,
his many arms encircle me, then tighten
as my throat constricts beneath
their terrifying force. My eyelids
are clamped shut, my voice is mute,
I struggle and am caught. I thought
to rid Knossos of shame; each night
I see the scarlet yarn I spun
for Theseus; yet, truth to tell,
the beautiful Athenian who gleamed
with gold was why I steeled my heart
against my half-sibling, Asterion.


Each night the tentacles of blame
ensnare me in a crimson cord,
and when I wake, the signs are visible
as angry carmine welts, crisscrossing
my body like a hunter’s mesh.
My brother’s blood forever stains
the hands of Theseus, who lately shows
me his disdain and scorns my company.


The oracles are mocked, that gave good augury.

Sky Bridges above the Seine at Marnay

In March you hear them passing
overhead, and you look up to see
a bridge of wings that transits
the empyrean; cohering and dissolving
as the echelons fly north with spring,
returning from the warm south
of their wintering, to nesting sites.
Span on span, they arc above the Seine
in transitory skeins, their voices
hail each other as they recognise
their home terrain, feeling the familiar
thermals ease them through remembered
skies, where no hunters intercept
the bridges they construct in flight;
calling their anticipation, urgency, delight.

Following the Seine as guide
they travel onward into night,
hopeful that with dawn they will
reach journey’s end, descend, alight.

Watching from the arched iron bridge
that bears the needless sign, La Seine –
water chatoyant chartreuse
beneath wing-scribbled aqua light –
I sense the current’s energy, as do
the birds, already tired, urging them
to one last burst of stamina, while I
abide – wingless, non-amphibious,
a creature not equipped for flight,
witnessing the passage of the river,
chevrons ranged on high,
listening as pinions cleave
trajectories through mild spring skies.