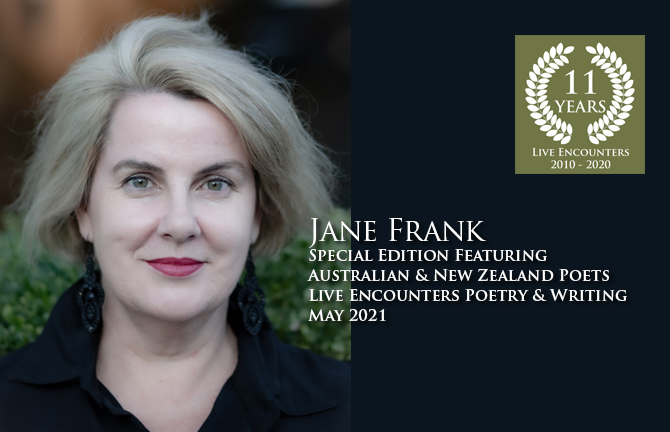 Jane Frank’s latest chapbook is WIDE RIVER (Calanthe Press, 2020). Her poems have appeared most recently in Antipodes, Other Terrain, Backstory, Shearsman, Takahe, Not Very Quiet, Blue Bottle Journal, Burrow, The Bengaluru Review and Meridian. She was Runner Up in the Wigtown International Poetry Prize 2020, has twice been shortlisted for the Thomas Shapcott Poetry Prize and was joint winner in 2019 of the Queensland Poetry Festival / Philip Bacon Ekphrasis Award. In March 2021, Jane was a Feature Poet at StAnza International Poetry Festival (St. Andrews, Scotland). Her inspiration for poems comes from discovering the surreal in the everyday, interest and earlier qualifications in art history, the landscapes of childhood, wise things her children say that stop her in her tracks, and time spent by the sea.  Originally from the Fraser Coast region of Queensland, Jane now lives in Brisbane and teaches creative writing at Griffith University. Read more of her work at https://www.facebook.com/JaneFrankPoet/ and https://janefrankpoetry.wordpress.com/

The flowering of the night-blooming cereus
was an annual event

preceded by warnings that the buds were
growing big

each bough a treehouse room or a country,
the high one where it grew

had often been the deck of my ship. And my
uncle said it was foreign,

neighbour’s suitcase? I think it will flower
tonight, he’d say

and we’d wait for the phone to ring. Walk
there under a full moon

in striated light — it followed a lunar cycle.
We’d stand in the heat,

the adults drinking wine, and wait. At 8 or 9
the tightly packed petals

would uncoil in slo-mo, a film of waxy, fragrant
white from the straggle

Its arrival was like a birth, each face the size
of the cocker spaniel’s

head. Big, gangly, awkward. The potent aroma
of vanilla in the still

in a sinister way, something shared with a were-
wolf, the way it never

waited for the sun’s kiss. The way it withered.
Was dead by dawn.

Outside in a quartz light. Milky white
beams latticed with gypsum’s hallmark

gold. I can see you through it: navigate
the almost dusk. Pine trees alert to one

side of the road: the mountain a half
hidden mystery to the other. Viking

crews found distant continents like this:
had a crystal that polarised light. A solar

compass if fog or cloud was unfathomable.
Could find sunshine hidden below the

horizon. Honeybees can do this too: stay
on course when a fine day blackens. When

a field of flowers is as foreign as a sea