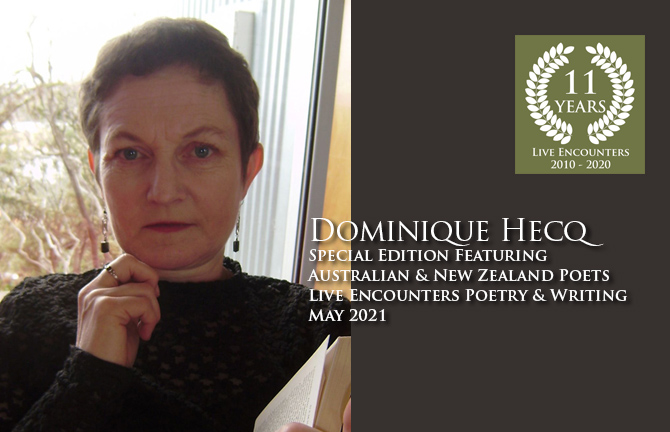 Dominique Hecq is a poet, fiction writer and scholar. She grew up in the French-speaking part of Belgium and now lives in Melbourne. Hecq writes across genres and sometimes across tongues. Her works include a novel, three collections of short stories and ten books of poetry. Her poems and stories have been published internationally. Among other honours, Dominique is the recipient of The Melbourne Fringe Festival Award for Outstanding Writing and Performance (1998), The New England Review Prize for Poetry (2004), The Martha Richardson Medal for Poetry (2006), the inaugural AALITRA Prize for Literary Translation from Spanish into English (2014) and the 2018 International Best Poets Prize administered by the International Poetry Translation and Research Centre in conjunction with the International Academy of Arts and Letters. Tracks (2020) is her latest book of poetry. With Eugen Bacon, she has co-authored Speculate (2021), a collection of microlit. Songlines is forthcoming.

Because love by its nature
desires a future—Sarah  Kane

For days light wouldn’t die in my dreams, green
so luminously aglow it was as if death itself

in the squall of our son’s winter had turned
a blind eye to the laws of language and physics.

when gales slam the stratosphere and crash on Earth
in a show called Aurora Australis.

It all happens so fast. The photograph
falls in my lap with letters never sent,

memories of molten light rising and rising
from the freshly dug grave, or recreated.

At Hartz Peak, twenty-two years ago, green
so luminously aglow it was as if death itself

was steering our hearts closer to Antarctica
melting away with life’s shore melding words:

The wind, the heartbeat. The ocean
floor shifts in its sleep. There is
no shadow here, no shade to touch
no dune, no wall on the shore line
no fore slope, no plunge. There is
no tide, no lagoon, no island
no possidonies, no algae
no shells on the sand tongue. There is
no moonshine, not a cloud, no free
spooling equinoctial light.


The wind, a heartbeat. The ocean
floor shifting in its sleep. There is
no shadow here, no shade to touch
no swell, no roller, no breaker, all
the same wavelength. We are
two upturned crests joined in passing
an internal wave, gusts of wind
a spike of lightning, the whole world
floor falling deeper than deep sleep.

The wind, our heartbeat. And we have
lesser time than the pummelled dark.

I’ve never counted the bones in my hand, but I have an extra finger shaped like a honey eater’s beak—an esoteric bit of fleshed out bone that blocks all light except the liquid bandwidth emitted by ionised hydrogen in burning honey that reveals the cloying structures of gas corralled by magnetic fields and birds of paradise. My extra finger enables me to feel the inside of blackwood buds. Taste the nectar of their nebulae-filled umbraphile flowers. Smell the heat of what will be called this year’s hydrogen alpha bee bushfire. See the next total eclipse of the sun at Exmouth. Capture the cosmic inferno that will be known in one thousand and one nights the mother of utter silence.