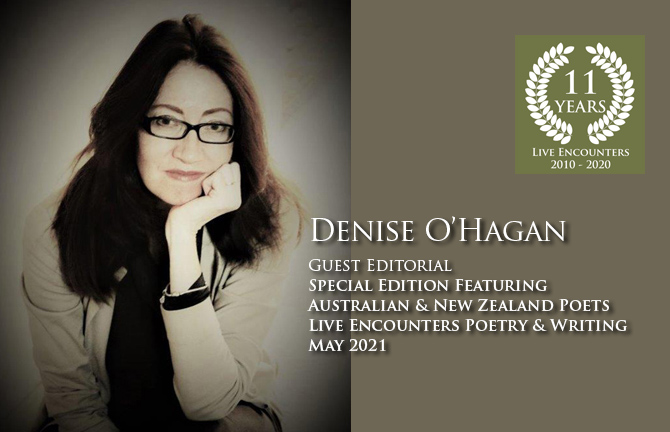 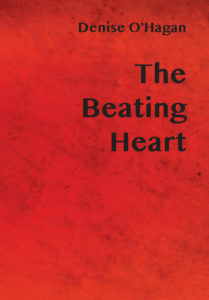 Denise O’Hagan is an award-winning editor and poet. She has a background in commercial book publishing in Routledge, Collins and Heinemann (London) and Harcourt Brace, Horwitz Educational and Cambridge University Press (Sydney). In 2015 she set up her own imprint, Black Quill Press, to publish her late mother’s historical novel Jerome & His Women (2015), shortlisted for the Institute of Professional Editors’ Rosanne Fitzgibbon Editorial Award (the ‘Rosie’). Her other publications include Messages from the Embers (2020), Mini Style Guide (2019), Chinese Whispers: In Search of Ivy (2018) and A Roman Death (2017).

Denise is also Poetry Editor for Australia/New Zealand for Irish literary journal The Blue Nib. Her poetry is published widely, including in Eureka Street, The Ekphrastic Review, Not Very Quiet, Books Ireland, Other Terrain Journal and Backstory Journal and is forthcoming in The Copperfield Review. She has received numerous awards, most recently the Dalkey Poetry Prize (2020), second prize in the South Coast Writers Centre Poetry Award and the Sutherland Shire Literary Competition; shortlisting in the Robert Graves Poetry Prize, the Stephen A DiBiase Poetry Prize, the Saolta Arts Poetry Competition and the Booranga Literary Prizes; and commendation in the Australian Catholic University Poetry Prize and the Woorilla Poetry Prize.

Her debut poetry collection, The Beating Heart, is published by Ginninderra Press (2020).

When considering the rich and varied stream of submissions from Australia and New Zealand Aotearoa, I was struck by how many were so universal and timeless both in theme and style that they transcended any geographical boundaries except perhaps that of our global community. I deliberately elicited a broad sweep of poetic voices, from the emerging to the established to the highly renowned, crowned by the prodigious talent of David Malouf, whom I had the honour of interviewing.

Let us look more closely at the poems to hand. With the unique power conferred by poetry to peel back the layers of our conscious, public life and find a voice to express emotional truths and map out internal landscapes, these poems merit close attention. By turns affirming, poignant and disturbing, they touch on a multitude of subjects, both obliquely and, at times, directly, and do so in a variety of styles – from free verse to prose poetry, from villanelle to monostich poems. Impossible though it is to pay individual tribute here, certain themes recur.

The ancient lands of the Aboriginal and Māori peoples who originally inhabited them feature prominently, together with an acknowledgment that it is to nature we often turn when in distress or in simple meditation. The aching beauty of a night-blooming cereus, for instance, awakens us to what we may fear we have lost in our relationship with nature. Again, implicit in the lingering smell of burnt wood in summer, the splendour of a misty dusk, or the delicate twists of a eucalypt tree is a plea to nourish rather than exploit our natural environment.

Inextricably linked with the land is the animal and bird kingdom in all its threatened majesty. And so, while our eyes are opened to the intricate trajectory created by the migration of birds in France, the tiny life of a New Zealand moth, or a solitary Sydney tern, we are also called to face our brutal and systematic cruelty towards animals – the suffering of racehorses, the extermination of sheep, or the kangaroo cull.

Familiar images of thundering freeways and congested traffic are unflinching reminders of the costs of industrialisation. We see topsoil depleted and rivers turning sickly and are forced to acknowledge our own complicity in creating a world where beauty resides in an oil slick or the curling of cigarette smoke. Clearly, many poets support a sustainable lifestyle, and the poetry reflects it. This is ecopoetry at its best.

Some of the most chilling works explore the ongoing predicament of women in society. Perhaps in part due to the pandemic, a steep rise in domestic violence has been reported in this part of the world, particularly against women, and often at the hands of men in their families. And so we are called to face the harsh reality of women scrounging food in life on the streets, girls who need to watch their own fathers, or the heartbreaking mementoes of fatal attacks on women in supposedly safe public spaces.

Yet the resilience of women is as much a theme as their ill-treatment, and it comes in many forms – in the girl mourning the father who abandoned her, for instance, or the young mother struggling to breastfeed her baby, trusting in instinct and love to see her through. In mythologies, too, we see an enduring female strength as, for instance, the poem in which shifting perspectives lend a twist to the story of Odysseus, revisited from the point of view of his abandoned wife, Penelope, whose reflections embody both stoicism and a sharp intelligence.

This is not the only poem invoking the rich heritage of Ancient Greece and Egypt, bringing the past to life. Privy to an archeologist’s delirium, one poem treats us to a series of mosaic-like images ranging from Akhenaten and Nefertiti to ruins at Knossos; another recalls the translations of the Iliad and the art and sculptures lining the Panathenaic Way; and yet another plunges us into the imagined mind of Cassandra of Troy, cursed to prophesy correctly yet never to be believed.

Portrayals of love and other emotions, and the complex web of feelings that emerge when treading the liminal spaces of loneliness, ageing and loss offer poignant counterpoints to the more obviously confronting works. Those poems about our inner states are often meditative, teasing out our memories, hopes and dreams. In one instance, for example, a lake’s green algae recalls the sometimes cloying nature of our own thoughts. The abiding power of symbolism is revealed in the rituals of ladling out soup or brewing fennel tea, and also resides in all manner of physical objects from a Holter monitor to a painted vase and a wig. Some poems are deeply philosophical, whimsical even, pondering the colour of oblivion or the shape of aspiration, and summing up experiences not in the light of what they bestow, but of what eludes us – such as the field of lavender in which we never stood, a dalliance in Andalusia that never happened.

There’s a metapoetical dimension to some of the works, too, as in contemplations of the yawning blankness of the unwritten-upon page, our tendency to try to impose order through language, and the lurking fear of never being able to write again. Conversely, there are glorious instances of the rush of words likened, for example, to the flow of mackerel in the tide.

The sense of discovery and revelation associated with writing poetry that David Malouf touches on might be extended to the act of reading it. Either way, we are left feeling privileged in being, however briefly, witness to someone else’s world, and with an intimation of the other. I’m proud to present this tapestry of talent, and delighted to help showcase the critical place that our writers hold on the wider stage. May you enjoy reading all the works and emerge moved in the way that only poetry can move us.

Finally, I would like to extend my heartfelt thanks to Mark Ulyseas, Managing Editor of Live Encounters Poetry & Writing, for his kind invitation to me to guest edit the May edition of this wonderful journal, and to all the poets who have contributed to make this edition what it is.