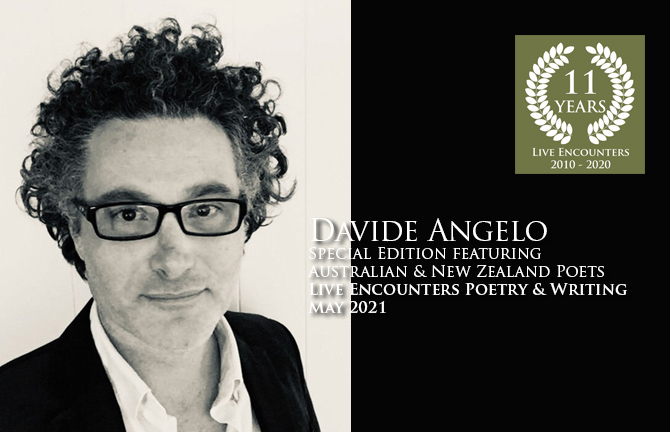 Rooftops are lit, shadows tremble wet leaves
Until the sun has its way, conjures the water’s
Invisible retreat into the cloud. Under the eaves

With all its dark stars, I lay awkwardly on the old couch
Between the dog and his lamb bone, my daughter’s
Angel-winged pink pony digging into my back.

The dog’s dreaming how high to pile the dirt mound.
I’m lost in eddies of mould, a sleeping rockface
With fingerholes wide enough for climbing.

The medical centre is shaped like our house.
An old dog-eared National Geographic of sorrows
Breaking seasons, a forest before and after it was felled

And the artist who built a wooden ladder that reached
1,650 feet into the Quanzhou sky, only to set it on fire.
Grey-headed flying foxes hang like blossoms

In bluff warning beneath the back verandah steps.
If the scarecrow fails again, I’ll give him the side-eye
Like a crow, peck at giant worms of air, stride around

The vegetable patch as though the whole world is a narrow ledge.
We re-dress the scarecrow in my flannel shirt and acid-wash jeans
Fatten him with viscera, down feathers of waterbirds and leaves

The colour of scattered sunrises. When she asks why she lives
In two houses, I daydream a wheatfield beneath a sky empty
Of crows.

Near the peak of Mount Alexander, it rains.
It’s where the fire stopped, where black outer barks
conceal darker anatomies, hold the mountain,
keep the avalanche intact.
Beyond the crest, the sign reads Causeway.
The voice of the map is passionless, arbitrary.
We sit in silence, two cups filling, searching
for a better way to describe a leaf on the wind.


We’re living on the crust of this star.
The oaks have been dying for months,
dying in order to live again and we laugh
because it’ll be Easter Sunday soon.
We search for the Dog Rocks, watch the abseilers
in the briefest free-fall, see the peaks of Tarrangower
and the Pyrenees range, talk among the granite boulders
where eucalypt trees have grown in twisted shapes.


Each time you tell me about the old silkworm
farm, I look toward the mountain, feel the weight
of the city we left all those years ago.
The apple groves in rows are pruned, shaped like bowls,
the memory of sunlight penetrates the canopies.
But it’s the Oaks we always come to see,
the Valonia Oaks planted in 1900, surrounded
by ropelike strands of younger trees.