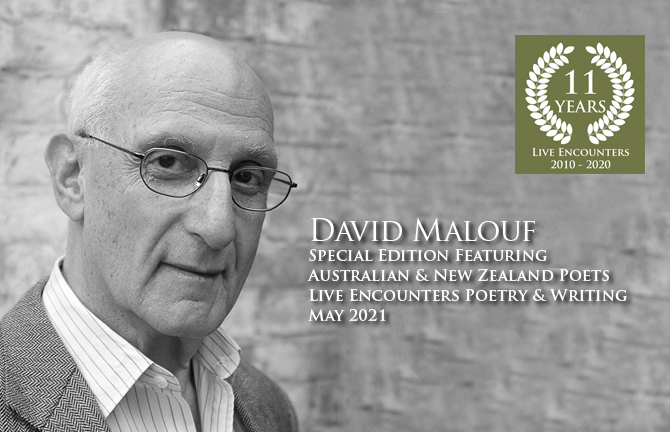 Widely considered one of Australia’s finest writers, David Malouf was born in 1934. After teaching in Britain in the sixties, he returned to Australia in 1968 where he taught at Sydney University until 1977. His fiction includes Ransom (2009), The Conversations at Curlow Creek (1996), Remembering Babylon (1993), An Imaginary Life (1978) and Johnno (1975), and he is the author of three volumes of stories and various poetry collections, including Earth Hour (2014), Wild Lemons: Poems (1980) and Bicycle and Other Poems (1970. Among his many awards are the Australia Council Award for Lifetime Achievement in Literature (2016), the Neustadt International Prize for Literature (2000), the International Dublin Literary Award (1996), the Miles Franklin award (1991), the Commonwealth Prize for The Great World (1990), as well as being short-listed for the Booker Prize (1994).

With warm thanks to Simon Farley, Fryer Librarian, Fryer Memorial Library of Australian Literature, The University of Queensland, for helping to facilitate this interview.

Denise: Good morning, David, and thank you for kindly agreeing to this conversation. You’re a poet and playwright, librettist and essayist as well as a novelist, so I might begin by asking what drew you to the world of words in the first place?

David: The need to discover what I most deeply understood at first, as only the writing itself – words in their moment of appearing on the page – could reveal it to me.

Denise: Inspiration comes in many forms – people, place or something else entirely. What shape does inspiration take for you, and has this changed over the years?

David: The sudden apprehension, set off by something seen and heard, or misheard or misread, of a new insight into things, that if I allowed the act of writing to reveal it would appear on the page and be there to be read.

Denise: Turning to your poetry, now, it is known not only for its lyricism and imaginative power, but also for its themes of ‘interconnectedness’, a sense of navigating the space between things and people. Is this also how you consider your work?

David: I think of poetry as revealing to me, as writer or reader, what I think and feel most intensely but also most deeply, but in a spirit of play, both verbally and in active consciousness. What I hope to discover there is my ‘real’ identity.

Denise: It is said that in times of crisis, people turn to poetry for inspiration, or consolation. Do you feel that with the recent crises – the Australian bushfires and global pandemic – that poetry may be becoming ‘used’ in the interests of certain ideologies?

David: Poetry has nothing to do with issues or ideologies or opinions – or not as I – as a writer or reader – understand it.

Denise: Following on from that, what advice would you give to an aspiring poet?

Kipling – ‘When your daemon is in charge, do not try to think consciously.
Drift, wait, and obey.’

DH Lawrence – ‘A young man is afraid of his demon and puts his hand over the demon’s mouth sometimes and speaks for him. And the things the young man says are very rarely poetry.’

So I have tried to let the daemon have his say.

Denise: Writers work in different ways. Do you have a favourite writing routine – a time of day, method of working or anything else that you find conducive to writing?

David: Fiction demands discipline and persistence of a daily routine. Poetry appears out of nowhere, when it wills.

Denise: And finally, a practical question. We live in an age of increasing dependence on technology for both writing and the dissemination of our writing, yet I believe you prefer to work by hand. Why is this?

David: Writing is as much a bodily activity as a mental one. The pace at which the hand moves across a page seems to be one where first and second thoughts can appear almost instantaneously.

Denise: Thank you very much for your thoughts and time. It is an honour for us to have your participation in this special edition, and we have no doubt that our readers will be thrilled!

The following three poems (From a Plague Year, To Be Written in Another Tongue, Mulberry Tree Dreaming) are from: David Malouf, Poems 1959-1989, University of Queensland Press, St Lucia, 1992.

From a Plague Year

A sign first in the sky, then other tokens,
but plainer, on the flesh. June’s thirty suns
flared and we were tinder. Flies appeared
and bubbled in pools, their green gaze multiplied
the dead. But we, the elected, all that term
kept house, kept shop, kept silence, knowing no harm
would come to us. We paid our taxes, served
on juries, saw men punished or reprieved
from death under the law. God’s eye
was on us. Like a red-hot cautery
it pricked and burned. Who keep His just commandments
shall live. No terror can afflict the saints.


But still each week the numbers swell, the needle
glows. In a devil’s covenant, through all
the colours of the rainbow, pale flesh bruises
black, then stinks and softens. We stop our noses,
the death-cloud blooms. We find its dark seeds scattered
like sunshine, everywhere.
And so we board
our houses up, burn pitch, read in the Book
and choke. By day no footfall, no wheel’s creak
in the cobbled square. At night the town’s a swarm
with cries, a fearful traffic. Dung-carts climb
to where, in moonlit fields, whole families meet
at the real pit’s edge, new nameless suburbs greet
new citizens; they seethe like privy holes.


Some say the plague’s a rat, soft-bellied squeals
in the rushes underfoot, a red-eyed fever
that glares. Or blame the Jews. Or claim the air
itself turns poisonous; where warm breath clouds
a glass invisible armies spawn, one word’s
enough to quell a city. It is death
we suck on now. The plague in our mouth.

No help! Gender of spiders on the tongue
that preaches, curses, pleads, God’s judgment wrung
in black sweat from our limbs. Are we in Bedlam
or is it Hell that rocks us with its flame?
The sickness in this month is grown so general
no man can judge. It comes to this: we kill
our neighbours with the very prayers we sigh
to Heaven. O my Lord, spare me, spare me.


To Be Written in Another Tongue

As for example, the language in which my grandfather
dreams now he is dead, or living,
muttered in his sleep. Clouds

flow to a different breath, daylight moons hatch from the stillness
of a different dark,
where owls drop from the sun, dirt-coloured starlings

by other names than we know them gather
the dusk, grain by grain let fall the shadow of their bodies.
Such ordinary events

are poems in another tongue and no translation
possible. Owl
with its heavy blood and vowel an open mouth

too slow to snatch the heads off
dustmotes. Humming-birds
like Giotto’s tear-stained kamikaze angels

sorrow, having learned
their name in a dead language
is entrée to a steel-meshed aviary or Table of Contents,

some grey Jardin des Plantes. Grandfather mumbles
our names in the earth. We come
to light out of his mouth, oracular bubbles.

I range through the thesaurus
for a word: homesickness, yearning
of grandsons for a language

the dead still speak, the dying in their sleep still
mutter, the advent
of common objects, strange upon the tongue.

Parachute silk comes spooling out of the mouths
of a silkworm factory; rumbustious breath
of the big tree’s rebel stillness rocks the house.
Invisible rip-cords jerk, sing, take the strain,
and new light mushrooms skyward, a ceremony
of change that no hands work; eyelids fatten,
creep, from spirit, its actual meat, shape strange
cosmologies that hold. Lords of the second
breath and transformation, we too shake loose;
our meaty souls grow light, grow luminous,
break free of their sticky net of fingerprints,
dull household chores, events. Is it enough,
we ask, this faith, this breath? Can we ascend
for ever? The grain of doubt finds its counterweight
of earth and earth falls upward, takes us, heart
and heel. The mulberry-tree, its filaments
all sheer flame, seethes and billows. Tough limbs deal
with the play of its buckled shadow on a wall.