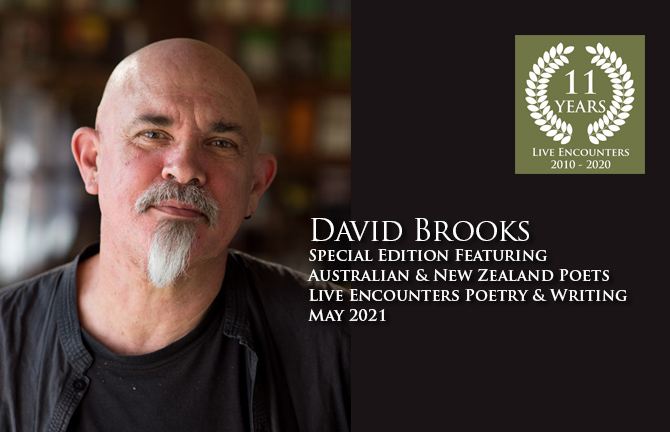 David Brooks (https://davidbrooks.net.au), a poet, short-fiction writer, novelist and essayist, taught Australian Literature for many years at the University of Sydney and was from 2000 until 2018 the managing co-editor of Southerly. His latest publications are The Grass Library (Brandl & Schlesinger and Ashland Creek Press), a memoir and meditation on animal rights, and Animal Dreams (Sydney University Press, 2021), a collection of essays on animals in literature, philosophy and public policy. A long-term vegan and an advocate for animals (kangaroos in particular), he lives with rescued sheep high in the Blue Mountains of New South Wales.

One Too Many Mornings

I don’t know what it was, I guess
just that one too many mornings
reading an item in the early news
telling of yet another skirmish or
outright assault in this endless war,
an unknown killer scattering cubes
of poisoned meat in a local park, another
target set for the culling of ’roos,


another ship leaving Fremantle
with seventy-seven thousand sheep aboard
destined for eventual slaughter
or the tale of a solitary wombat found
wandering the Victorian scrub with a
cross-bow arrow through her skull, but in
exasperation, writing to a friend, I’d
spoken of the Auschwitz of the Animals


only to receive a reprimand
for using that term at all.
‘How can you compare,’ she asked, ‘the suffering
of animals with the suffering of humans?’ I’ve
considered this and come
to think she may be right, there’s
the Auschwitz of humans, one
of the lowest episodes in the long


and foetid history of our race,
and there’s this other thing, without
any particular name or place,
this silent, ‘natural’, daily thing we do, the
taking of children from their mothers, the
stealing of milk to feed the children of others, the
maceration of infant chicks alive, the trucking
of countless creatures to their deaths: over
every stock-race, every paddock gate,
every sow-crate, every sty,
all but invisible to our human eye, that
never-ending lie, Arbeit Macht Frei.

Tearing through ti-tree, fanning through brigalow,
boxing and weaving, the young kangaroo
are training for the challenge of their lives,
running through the evening light,
racing toward Boston in the southern night,
crashing and plashing through gidgee and saltbush
redgum and spear-grass and wandoo,
leaping with their cousins, their mothers,
their aunts and their tiny brothers,

leaping toward the lights and guns,
leaping under the nets of stars
bounding toward the skinners’ knives,
bounding while the hide is torn
screaming from their backs and thighs,
pounding along highways in the cold pre-dawn
to the tanners in Narangbar, Yallourn,
crates bound for China, Vietnam,
running from the battered bodies, the shattered mobs

toward the cutting frames, the stitchers’ bobs,
leaping toward Boston, riding on the decks
of container ships, over great swells of ocean,
through swirling birds and plastic-ridden tides
toward the docks and training camps,
toward the Main Street starting ramps,
every fifth competitor a kangaroo
running for Reebok, Nike, Adidas,
past Ash and Ray and Wilson Streets, through

Ashland and Framingham, keeping pace
with the fastest, stacking the forward packs,
leaping for the smashed skulls and the shattered backs
of their siblings, pounding the steep hills of Newton,
on to Beacon and Hereford, under the final
banner, surrounding the winners’ stand.
What? You didn’t see them? Amongst the calves
and the slaughtered horses? Didn’t
see them? No?

Written in support of a campaign to persuade Nike and other companies
to refrain from the use of kangaroo skin in their footware. The author is
well aware that these companies employ such skins in their soccer boots,
not their running shoes, but once the metaphor of the Boston marathon
suggested itself there seemed no escaping it. The suffering of the roos is
just the same.


On a photograph of sheep
killed in bushfire

Trapped by barbed wire
they have had

no way to go
between the fence and the wall of fire,

each one of the sixty-two
now swelling in the Sunday heat, face

the charred, writhen metal
of a gutted ute, the grazier

fled, now doubtless
lamenting the loss of his livelihood,