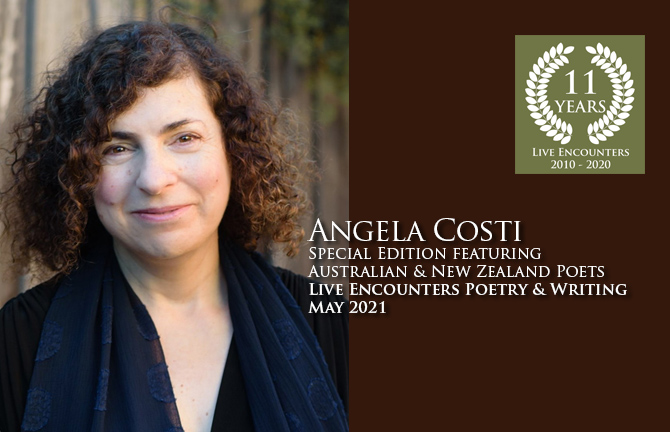 Angela Costi is the author of five poetry collections including Honey & Salt, Lost in Mid-Verse and An Embroidery of Old Maps and New. Since 1994, her poetry and other writing have been widely published. Recent work is in the Australian Poetry Anthology, Hecate, The Blue Nib, Cordite Poetry Review, Rochford Street Review, Burrow, Writers Resist, Antipodes, StylusLit, Backstory Journal and The Journal of Working-Class Studies. In 2021, City of Melbourne has provided creative development funding for her to work on a new suite of poetry with the working title: The Heart of the Advocate (informed by the classic legal textbook The Art of the Advocate by Richard Du Cann).

We sit side-by-side, a breath of hope between us
facing our Theia with her strong lips dragging on
the cigarette, turning her home into dancing smoke.

The vapours go wild in their sliver of light, we muffle
our coughs to prove we are more than little girls
fearing the destiny Theia invokes from her cards.

Theia swaddles the cards in a cloth the colour of blood,
kisses the cloth before unveiling their presence
when you touch the cards, think about your future.

Your touch, at first, a butterfly’s wing, until our eyes
become a cheeky whisper then your fingers dare to linger
enough for Theia to loudly rasp The Humble Warrior.

Destined to change soiled sheets each morning,
to make his coffee weaker with each passing year.
No longer the smaller sister, you are seasoned with toil.

Theia spreads my seven cards and taps each one
announcing me as The Megaphone but you stand up
protest igniting your mouth – She’s not as loud as me!

He is encased in wall-to-ceiling shelves of law
intent on finalising his paper for the conference
failing to smell vulnerability has entered his realm.

She is the fabled child who entered the dark wood
without the compass of language to find truth
offering her essay, with his mark, as broken tribute.

His tone wrestles with hospitable welcome,
the chair assigned to student is left
burdened with the load of academic spill.

Books fatigued with proving their worth,
grey-leads smeared in margins, a pear with ample glow
promising juice – don’t sit quietly on his leather-skin desk.

Their dialogue is forced to run in opposite directions, he stops,
retreats into the forest of his memory, searches
for the girl who wrote the words he didn’t favour.

Her nights of carrying quotes into the refuge of morning
are tossed into the nether scrub
while the pear secretes neglect.

The woman’s handbag was spent and tired, lying on the tree stump
with its metallic-gold chain snaking down towards the earth,
a former park ranger salvaging weeds found it.

When the news spilled the zipped compartments of her purse
there was a deep sigh of signatures
the courts blamed the lack of seasons, the surly clouds.

Once it was a parkland of lanky eucalypts with a creek bed
holding a clean stream of tears, an appetising stew of grass,
soil and bug for joggers, cyclists, nature lovers to visit.

Now her backstory is suffocated along with the air
and lost to noise battles between chainsaws and birds
in this space called ‘The Festival of Stumps.’

Under oath, she was heading home from a birthday party
at dusk with no lamp or sun to shine light, with no leaves
to fall and make those crunches underfoot from long ago.