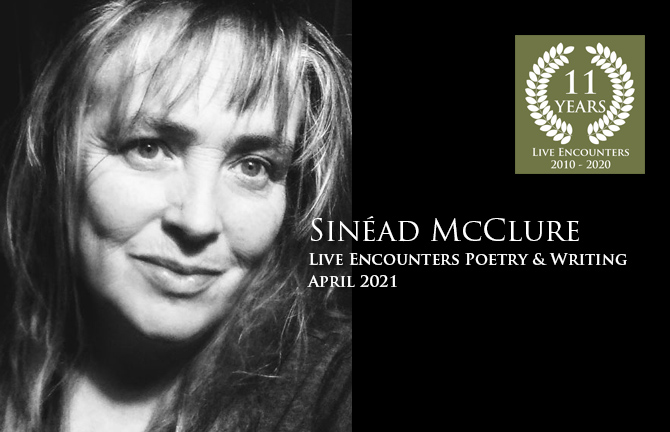 Sinéad McClure is a writer, radio producer, and illustrator. Her poetry has been published on Poethead, Live Encounters ~ Poetry & Writing, Crossways Literary Journal, The Cabinet of Heed, Dodging the Rain, StepAway Magazine, A New Ulster and The Ekphrastic Review. In March 2021 Sinéad won the 8th O Bhéal Five Word Poetry Prize.  Sinéad is also a writer for children, and has written 15 dramas for Ireland’s National Radio Children’s Service, RTEjr Radio on the themes of conservation and Ireland’s natural heritage.

We’ve just come in after trawling
for pinkeens, jars on strings
slung over our shoulders,
knees scuffed by the Boyle River current.

Around the parlour table
we play musical chairs
in a scramble for seats.
Faces spit and hankied clean
warmed by steam
curling from a rabbit stew.
There’s a coup
in the seating war
and I am overthrown
to the highest pew—
feet dangling.

Every piece of meat is savoured,
plates licked, forks quick
to scrape the essence
back to the patterned roses.
A swift repast, a quick escape,
to leave our seats and grab our jars,
race towards the half door—jangling.

Our leaving brings a rare howl
from granny, who prowls
the room carelessly.
Just for a second
her eyes are keen again,
fleet as flickers of ash and ember;


She remembers childhood fishing
from Clooncunny bridge;
on the water tiny bubbles
bell and twist,
the jetty is a crucifix
floating in the mist
of her failing Autumn.


That was the year I made my communion.
I fell that day too,
three stitches in my knee,
a shiny, stone sized scar.

And it was the year
I fell over in the garden
trying to avoid a slap,
after answering back—that little scar bled.

Remember you borrowed Henry’s Honda 50
and I begged to be pillion?
My arms too small to hold on tight.
What a fright you got when it skidded.
We were digging out pebbles for weeks.

I was six, I learned to be brave.
A lollipop, a shot, a stitch.
A sharp intake of breath.

I can’t touch your pallid brow.
I’ve lost all bravado now.
Instead I turn to run,
stub my toe on the chapel door
hold back the shout
until I’m out in the July air.
1974 was a better year for an accident.

We flew with you
from wood  to wall,
grasping handfuls
of the featherless air,
till in cupped hands
I carried you out,
straightened
your tiny, bird feet,
tucked you beneath
the lobelia