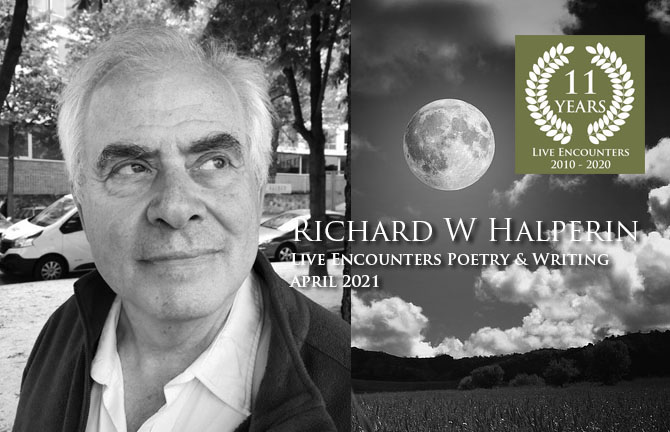 Richard W. Halperin holds Irish-U.S. nationality and lives in Paris. He has published four collections via Salmon Poetry, Cliffs of Moher; the most recent is Catch Me While You Have the Light, 2018; People in a Diary is listed for 2021. In complement, he has published thirteen shorter collections via Lapwing, Belfast; the most recent is Richard Dalloway in Wisconsin: Two Poem Sequences, 2021. His poem ‘Snow Falling, Lady Murasaki Watching’ is on permanent display in the Hawk’s Well Theatre, Sligo.

One star does not make night. It takes
A few stars, not many, for that. My mother,
My father, were there, talking. I could not
Understand what they were saying. Sometimes
They paused, then paused longer. I wondered
Did they know I was even there?  They were
In their usual words to each other, not many.
We were on a back porch. There they were,
And the night. I had no word yet for sorrow,
But sorrow was. My parents were so young.
After, they unravelled the life we were having.
That night, they kept on going, in their few words.
I think they thought they were happy, that they
Belonged together, that it is a tender thing
To have a conversation which does not
Become dispute, which trails off into the night
And the night carries it. Deep night, when one
Is glad to have a porch. To have chairs to sit in.
To have a flat to go back into. Familiar.
Glad to have, when they remembered, a child
To bring back in. Not to think sorrow is sorrow.
Not to know that sorrow makes us what
We become. In time, my mother became
Interesting. My father became interesting.
I became interesting. That is what sorrow does.
This is summer night. This is the ending
I am now beginning. This is the ending, my
Dedicating this poem to so many beautiful
American artists, James Agee, Samuel Barber,
Eleanor Steber among them, their work
Is done, and to my parents, their work is done
And good that I was part of it, and so I also
Dedicate this poem to the patience to be a parent
Or to be an artist, as the world continues to
Fall through space and as space continues to
Fall through something larger, and through
Something infinitely smaller and more patient.