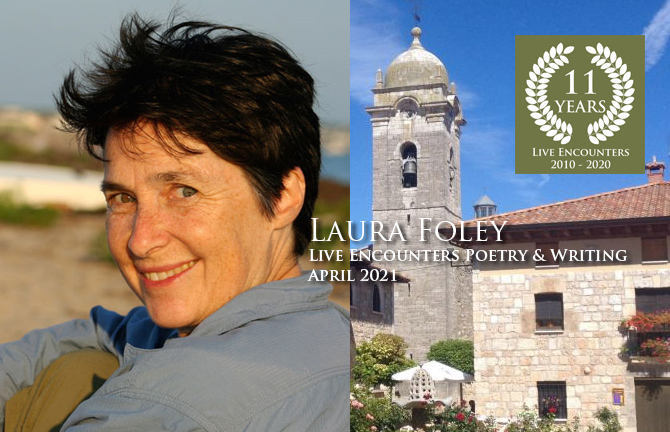 Laura Foley is the author of seven poetry collections. Why I Never Finished My Dissertation received a starred Kirkus Review, was among their top poetry books of 2019, and won an Eric Hoffer Award. Her collection It’s This is forthcoming from Salmon Press. Her poems have won numerous awards, and national recognition—read frequently by Garrison Keillor on The Writers Almanac; appearing in Ted Kooser’s American Life in Poetry. Laura lives with her wife, Clara Gimenez, among the hills of Vermont. https://www.lauradaviesfoley.com/

The buildings are limestone,
rosy, ochre, ancient blocks,
the church is stone,
on top an iron cross.

In a rooftop nest
of wheat and twigs
it’s gathered from the field,
a stork on skinny legs
stretches her wings
and feeds her young.


A church bell chimes the hour
and the quarter hour
and the half
as seeds float down from unseen trees—
linden, oak, acacia, birch.

A small black dog trots by,
at home in this ancient town,
as are the storks, the seeds,
the iron lamps,
the oval drinking trough,
the wind holes cut in stone

I
Nephew’s first visit from Spain,
saying Yes, in halting English,
to my daughter, who leads him
to the stage-lit dance floor—
no hesitant tremor
from this shy young man,
stammerer in a foreign tongue—
Yes, to dance after dance, opening
like a flower in sun to all of us.


II
They arrive in time for the waltz,
his wife in flowing black dress,
with tiny white constellations,
revolving like Gemini
around a sun only they can see,
a bump of new life rounding her waist—
a galaxy of stars,
circled by my son’s guiding arms.

III
His father lies buried in the field,
near the house where our children
were born, where crickets
must be calling same as here,
where they augment fiddle and guitar,
seeking mates in creation.

This late spring afternoon,
among the mountains of Léon,
I sit and watch the light
moving on a shadowed field,
like the finger of fate,
rounded bales of still-green hay,
poplar leaves shuddering
like penitents receiving grace,
in the breeze cooling my face,
the usual shadows
lengthening toward night—
but in the woods, unseen, a bird
I’ve never heard before—
a call arising from ancient tales,
a strangely plangent, medieval song,
but so clear, right here: Cuckoo.
I rub my ears, and hear again:
Cuckoo, cuckoo, cuckoo—
and then, Sumer is Icumen In
rising through time-woods in my mind,
from elementary school, my singing
Coo Coo Coo Coo, Loudly sing Cuckoo,
in concord with these foreign Spanish woods.

Oh When the Saints

as a baby sheep, all fuzzy fur and ears,
gambols through a field, where I rest,
on a wall of stone just high enough to sit,

dangle my feet, after walking
today’s fifteen miles,
over a hundred these last ten days.

We catch the ferry across the bay to Spain,
walk miles up a mountain
to an ancient seaside town.

I wade into the harbor, to cool my aching legs,
and am struck, I think unjustly, stung on my foot
by a fish, my big toe swelling clownishly.

The fish is a faneca, I’m told,
and it’s so rare to be bitten,
I feel I’ve won the lottery, in opposite.

Walking by a sinuous river, shadowed by chestnuts,
thinking of my mother-in-law in Madrid,
I’m grateful for my luck—

she’s beginning to like me, now I’ve walked
five hundred miles across her country,
as I trudge two hundred more.

When we arrive in Santiago, the cathedral
of a saint, we visit his bones,
second year in a row, but it doesn’t get old.

We hug his bejeweled sculpture, feel the ancientness,
commune with millions of believers
who’ve done the same,

but when a man in line behind us snaps
a forbidden photo, I clap my hands in rage—
we’ve come so far to achieve this moment of peace!

How can I commune with a dead saint
I don’t believe in,
when bus tourists behave so badly?

My body shakes with indignation—
who does he think he is,
to spoil our pilgrimage?

Now I know why St. James
is often shown wielding a sword,
cutting off a head, trampling a Moor.

When the tourist ducks into the confessional,
after pilgrim’s mass, I regret imagining
severing his head, wonder if St. James ever felt the same.

The white pine weeps needles
leached of green—auburn snowflakes
I carry on shoulders and hair unaware,
into palliative care, handing newspapers
to patients—as I lean, one plucks
a needle from my shoulder, as wind
sifts the remainder from trees
like rain, like snow, drifting and burying.

We walked by gulls gathering for the night,
as seals rose from the sea, looking curiously
at us, before curling under icy black water.
A herd of porpoise emerged, dark fins
churning waves. In a chaos of sound, gulls
lifted from the cliff, filled the pink sky around us,
scavenging the porpoises’ feeding frenzy.
Sky purpled, sea turned placid blue as the sun set,
as we walked home, arm in arm in the dark,
under the sudden globe of stars, as if some great hand
planned to shake us up.