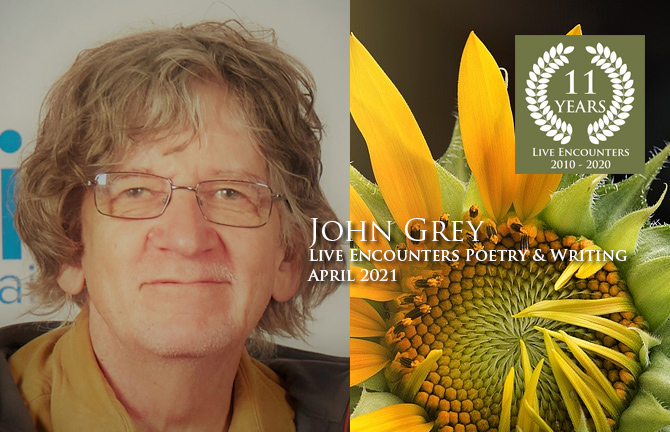 John Grey is an Australian poet, US resident, recently published in Orbis, Dalhousie Review and Connecticut River Review. Latest books, “Leaves On Pages” and “Memory Outside The Head” are available through Amazon.

I plant a sunflower
in this patch of earth
scarred by street salt
from overzealous snow-plows.

There is nothing more winter
than brown grass,
brackish soil.
Or cold hands
that make a place
for a seed to take root.


I’m hoping that flower
will lead us both out
of our unpromising situations.
that its golden face
will return the favor
to the one who gave it life.


We both need something
to raise us up
out of darkness.
We are both enamored
of light.

A squirrel spies spilled popcorn,
darts out from cover,
then, at the sight of me,
stops, flinches, turns,
scurries back into the brush.

I don’t move.
His second run at food
is more daring than the first.
But it still brings him up short.
The retreat is more measured
this time.
It involves various glares
in my direction,
a reconnoiter,
maybe even some physics.


Third time is a full-on, commando raid.
That rodent rushes up to the tip of my shadow,
grabs a piece of popcorn,
hops away like a rabbit
to the safety of its tree.

A bold and enterprising raid
on a food source –
that is how the squirrel
becomes subject matter.
Ants remain anonymous.
A twittering poplar can’t compete.

There’s no disguising the wants of these people.
It’s to obliterate the pins at the far end of the alley.
A strike is better than sex. A spare is sex.

But then there’s the split – no sex at all.
At least, until some guy powers his ball
at an impossible angle, knocks one into the other.

Then it’s great sex but with the one who looked
so mousey until she really let her hair down.
But it’s not sex. Not really.

Not when you take the crazy scoring system into consideration.
Some pins carry over into the next frame.
Doesn’t happen that way in bed.

Same with the fact that it’s a competition
with a real flesh and blood human being,
not the machine that resets, keeps the tally.

If you win, it’s like the woman stayed the whole night.
If you lose, no matter how many strikes and spares,
it’s just bowling. Nothing better to do on a Saturday night –

which is why Andy’s here in the first place.