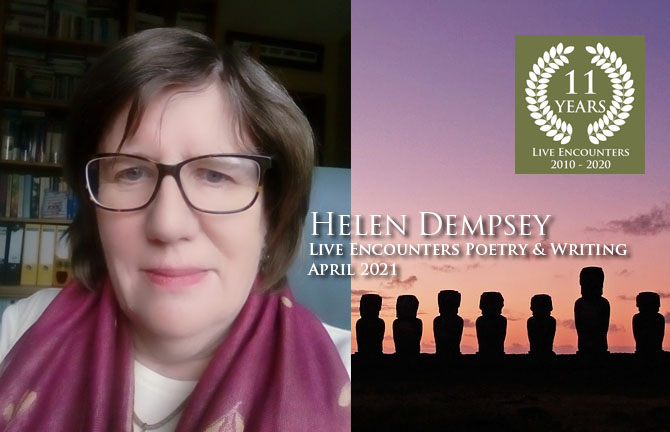 Helen Dempsey from Rush, Co. Dublin has had poems published in anthologies, magazines,   online, local radio, poetry readings and open mic sessions. She won Fingal Libraries’ Poetry Day competition 2018; a commended and highly commended award in the Jonathan Swift Poetry Competition 2017 and was shortlisted for the Bridport prize in 2018. A member of the Ardgillan Creative Writers’ Group, she holds a Masters Degree in Poetry Studies from Mater Dei College, D.C.U. and is working towards her first collection.

I feel in the fabric threads of being
molecular intensity,
the weighty sense of altered horizons.

yet I feel it.

Mental magnification plays deceptive games,
insane machinations or are there corrugations
on the mirrored estuary?
Have I mistaken the rustling
of silver birch leaves clapping?

Costal dwellers ignored the elephants
before the great St. Stephen’s Day tsunami.
I see the early signs of unease
as yet an intermittent breeze,
but there is anarchy in the air.
The global temperature is rising.

Huddles of sandbags
in household islands.

The enemy creeps closer,
with every wave hope ebbs.

silent phones, candles sputter
in what was once a home.

Clutch trinkets and a change of clothes,
leave life’s remnants behind.

too tired to utter worthless curses.
The rising tide is lintel level now.

As sirens call their final warning
neighbours motion from a boat.

Waver on the sill; one more
bewildered refugee tumbles.

Core of nowhere. Desolate
hapless habitat of no one.

Island mysteries lichen carpeted,
pristine pile where nothing, no fall of foot, is felt.
Hints of stewardship haunts in long-forgotten lore.

A Bounty tale, boon for felons or pilgrims but lips are sealed,
tongues silent in stone-faced Moai gargantuans.

Too late true revelation: Rocks cannot float.
Imprisoned in remote, insane, isolation
the savagery of disintegrating self in their last days,

baleful beings froth frantic pleas to dead-pan deities
with no comfort of resurrection.

(after Martin Buber’s I and Thou)

In the dugout felled from a trunk, chiselled, seared,
honed by hand, Martin’s subject watches, waits
then launches with temerity to forage.

Native and ocean synchronize, far from the gull’s caw,
free to ponder below a huge moon
that brings the shoals to him.

as he grows; two old men.
He knows the moods and hues of his lunar companion,
the slow arch of seasons.

They have mellowed
in their spheres, unable to touch:
I and it. I and thou hover on the brink

the native lowers himself into the briny
path, ripple-lit, to the horizon,
the capricious moon beams

while the other dreams. Tides abate.
Beneath tropical skies the native lives, tries,
his orbit of effort, the essence.