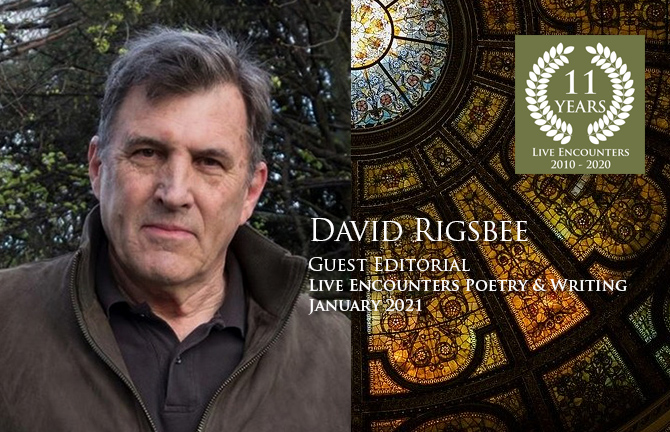 David Rigsbee is an American poet, critic and translator who has an immense body of published work behind him. Not Alone in my Dancing – Essays and Reviews (2016), This Much I Can Tell You  ( 2017), School of the Americas (2012) and The Pilot House (2011), all published by Black Lawrence Press, are but a sample. Forthcoming in the fall is his complete translation of Dante’s Paradiso from Salmon Poetry, and MAGA Sonnets by Donald Trump from Main Street Rag, a series of 85 quotations from Trump’s speeches and interviews bundled up in sonnet form (political satire and grimly humorous).

Stevens, Kizer, Smyth, and Me:
Sanctity and Agnosticism among the Mighty Dead

“They will get it straight one day at the Sorbonne. We shall return at twilight from the lecture,
pleased that the irrational is rational.” — Wallace Stevens

I got my first Mastercard at 18, in 1967, when I was a freshman at UNC-Chapel Hill and made my first two purchases:  Wallace Stevens’ Collected Poems and Opus Posthumous.  At the time, I wasn’t clear about “posthumous,” although “opus” I knew from middle school Latin.  Thus I wasn’t clear about the difference between the two books.  Nonetheless, the Stevens volumes impressed me with their heft, as well as their attractive, muted, matching book jackets.  The poems, meanwhile, had been recommended to me by two of my professors, poet Carolyn Kizer and philosopher Richard Smyth.  Kizer had read to us the first day of class a number of poems with minimal commentary, the last of which was Steven’s “The Idea of Order at Key West.” She did this, I presume, as a way of underscoring a kind of auditory and rhetorical dimension to the poem that reached just beyond comprehension, but not beyond desire for experience.  Or rather, it represented a kind of desire itself, while seeming to work in the gray area between death and life, or as I would later understand, heaven and earth.  And it was a sustained poem that suggested a degree of follow-through well beyond the means or even the standards of my peers.

At the time, the young Prof. Smyth had acquired something of an underground reputation as a deep-quarry intellect, someone you ought to pay attention to.  Tall, dark-complexioned, black-suited and thin, he sat on the front of the desk in our lecture hall and chain-smoked, lighting each new cigarette with the smoldering end of the previous.  By the end of class his feet were surrounded by a small circle of butts.  The ostensible subject of his course was Maurice Merleau-Ponty, but he preferred setting aside the French phenomenologist in favor of the Hartford insurance man, animating his otherwise lanky, stiff demeanor, to recite impenetrable sections of “An Ordinary Evening in New Haven” and to add equally impenetrable commentary, under a halo of smoke.  My best friend Bob Heffner, who later became a noted literary reviewer for The Canberra Times, and I tried to make what we could of both the poem and the comments.  We weren’t alone.  After class, a sandaled graduate student in wire-rimmed spectacles met with the class to translate what Prof. Smyth had tried to say.  Although we could never quite make out the point or see the depth of Smyth’s discourses, we were nonetheless convinced that something important had transpired, and the graduate student confirmed this impression, raising the issue of imagination and its relation to perception.  Bob and I would repair to a coffee shop to see what more we could squeeze out of these classes, without doing either justice or harm to them. One day, Smyth read us some snatches of “To an Old Philosopher in Rome” concerning the waning days of the philosopher, George Santayana, about whom I knew nothing but the name.  I went home and read the poem, and although it certainly felt exalted, I seemed to be missing something.  Still, I convinced myself that one day, simply by repeated readings and the passage of time, I would understand it.   I sensed the grandeur, but grandeur, at the time, was not part of the undergraduate’s kit bag.

It was Kizer who mentioned to Bob and me that Santayana as one of those philosophers interested in art and poetry, and therefore somebody who should be on our radar.  Kizer had, at the time, a house on Franklin Street, the main street of Chapel Hill, right next door to the retired swing-band leader Kay Kaiser (and his Kollege of Musical Knowledge), and two doors from the UNC President’s quiet mansion. It was a fancy neighborhood, and her presence there, where the house was being continually modified—on a lecturer’s salary, no less—hinting that large living was at hand.  It was her custom to have open house most days, and her creative writing students and allied faculty types came regularly, often to encounter noteworthy guests:  John Montague, Robert Creeley, Denise Levertov, Reynolds Price.  Afternoons proceeded to soirées and Turkish coffee to bourbon and wine.  Guests were welcome, and at Bob’s and my suggestion, she invited Prof. Smyth, who duly showed up one evening and occupied a corner of the living room.  Although I was in his class, I had been bashful in introducing myself to him, who I think was himself shy, but at the time what registered was the dark, undertaker’s withdrawal.  In any case, he made no pretense of knowing his students by name.  At some point in the evening, I asked her if she would read the poem about Santayana.

“To an Old Philosopher in Rome,” a poem that stands on the boundary of life and eternity, is all the more poignant when you consider that both Stevens and his subject were, to say the least, agnostics.  While that may be, Peter Schjeldahl remarked that when he lived in New York as a young lawyer, Stevens “took to sitting for spells of restorative peace in St. Patrick’s Cathedral—unbelieving, but savoring the aura of sanctity.” I had been moved by the poem, and she read it with feeling and formality, perhaps aware that the other philosopher was present.  It is a poem both of intimation and realization, though it is elusive, especially to a newbie.  At the same time, it was a poem I knew I would grow with, and I did, coming back to it over time, its layers revealing themselves as the years amassed.  The poem announces its theme at once:  “On the threshold of heaven, the figures in the street/Become the figures of heaven.”  Santayana is in the poem but doesn’t speak.  He is just a presence on the threshold of his death.  Instead objects — chairs, books, nuns—around him supply meaning.  By the poem’s end,

He stops upon this threshold,
As if the design of all his words takes form
And frame from thinking and is realized.

She pointed out that Santayana had mentored Stevens at Harvard.  No one reaches for Santayana anymore, but his influence during Stevens’ lifetime was widespread, as were his interests, which included poetry and fiction.  Both were raised as Catholics but shed their beliefs in the supernatural, especially given the negative, Puritanical, restraints laid down by God the Father.  It was many years later that I discovered the poem’s basis in an article on Santayana’s last days by Edmund Wilson that appeared in The New Yorker (“Santayana at the Convent of the Blue Nuns”).  That there was a factual source—and Stevens followed Wilson in supplying detail (nuns, pigeons, curtains)—did nothing to ding the mystery of Stevens’ magnificent meditation on mortality and imagination, where the poet finds, “how easily blown banners change to wings.”  Everything in the poem is at once in motion and eternal.  It’s a paradox familiar to poets.  It’s also a liminal poem, marking the mortal divide, as every stanza makes clear:

Things dark on the horizons of perception
Become accompaniments of fortune, but
Of the fortune of the spirit, beyond the eye,
Not of its sphere, and yet not far beyond.

Santayana is waiting, but “fortune” is not.  He is, after all, in the Eternal City, “the threshold, Rome, and that more merciful Rome/Beyond, the two alike in the make of the mind.”

In spite of her evasion when it came to the Romantics, especially Wordsworth, who can be said to have patented the poem of cosmic hints, Carolyn was drawn to poems of intimation, although her poems steered mostly clear of the kind of suggestiveness that bordered on the abusively mystical.  Still, she was aware of and appreciated poems that implied that language’s engagement with its nemesis and companion—silence—allowed poets the opportunity to cast a shadow onto the region where words themselves had no purchase.  She was aware too of the paradox that the silence that followed language often invited feats of articulation and rhetoric in order to give push-back to what lay on, so to speak, the other side.  Part Chinese, part Shakespeare.  On the one hand she was attracted to the imagistic sketches of Arthur Waley’s classical Chinese translations, their sturdy spareness; on the other, she admired the firm grip of Pope and his masterful eloquence.  She never stooped to explain the meaning of Stevens’ poem; I don’t think she knew that it had one. Nor did she do so for any of his other poems, such as the gateway poem, “The Idea of Order at Key West,” a work she, like Prof. Smyth, read to us and then played a recording of Stevens’ own recitation.  Instead, she spoke of Stevens’ ear and his sonic orchestration, in short, the music of the poems.  Unlike Bob Hefner and me, who had tried to plumb Stevens’ ideas by way of Richard Smyth’s lectures and meditations, with only partial success, Carolyn seemed more interested in the quality and play of letters and employed many other poems to shore up her argument that the message, whatever it was, could not be peeled away from the language it came in.  The truth is, all poets seemed to work two sides of the same hill, just as the “agnostics” Stevens and Santayana peered into the beyond.

Years later, another philosophy teacher of mine, Richard Rorty, would one day begin a class by reading “Anecdote of the Jar,” where “a hill in Tennessee” comes to represent the ground of endeavor for anyone seeking to make meaning.  And making meaning was Rorty’s point, as he followed up his recitation by pointing out that Jefferson had made his own hill at Monticello, then (and now) visible from the campus of the University of Virginia.  Why did he choose a wilderness?  Because that’s what it was, until something established it, that is.  R.P. Blackmur remarked that, for 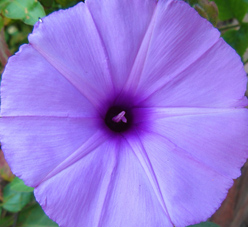 Stevens, “[a feeling] did not exist, even in his own mind, until he had put it down in words.”  Pragmatism had its uses, even (especially) in poetry.  Carolyn was to say that if she were stranded on a desert island and could have only one book, that book would be Stevens’ Collected Poems.  Stevens himself had remarked that he could get “no further than the statement that God and the imagination are one.”   His most recent biographer, Paul Mariani noted, “it thus might appear that he never got far beyond his old mentor Santayana, who held that ‘poetry raised to its highest power is . . . identical with religion grasped in its inmost truth.’”