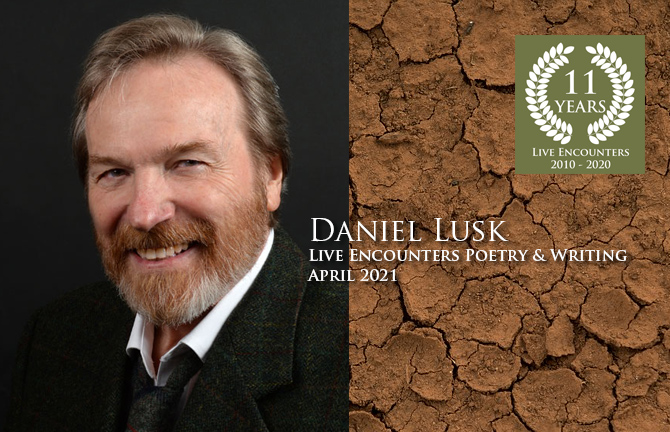 Daniel Lusk is author of several poetry collections and other books, among them The Shower Scene from Hamlet, The Vermeer Suite, and a memoir, Girls I Never Married.  Well-known for his teaching, he also has been a Visiting Poet at The Frost Place (Franconia, NH), Eigse Carlow Arts Festival (Ireland), and Juniata College (Huntingdon, PA), and a Resident Fellow at Stranmillis University College-Queens (Belfast, N.I.), Yaddo (Saratoga Springs, N.Y.), and The MacDowell Colony (Peterborough, N.H.). His genre-bending essay, “Bomb” (New Letters), was awarded a Pushcart Prize. In addition to Live Encounters, some of my poems appear in recent or forthcoming issues of Gulf Coast, Crosswinds, Innisfree Review, Hawaii Pacific Review, North American Review, Massachusetts Review, Spillway, and Nimrod International Journal.

To the Right of Prayer

Watching the Insurrection, that eruption
of hatred, Ma would have said:
“T’aint funny, McGee.” The way she did
when she learned we had stolen a leaky scow
to row to a muddy island in the river.

Truth is, we were not thieves but adventurers
in want of a boat. But she’s gone,
and I’m watching twin sisters on the TV news,
their lips like petals of flowers in Bali, try
to fathom what drives a cult of strangers

to despise them enough to burn down
a country in the name of Jesus and Abe Lincoln.

I am thinking of all the people I have loved,
the ones I can’t abide or trust today. If ever
things were “clear as the nose on your face”
as Ma would say, “it’s there in black and white.”

A weak apology by sycophants, no more
than this half-hearted snow fall, will not suffice
with so much of Truth and Beauty at stake
and them too indifferent to pray to.

Nine green apples and one red:
my life.
I should not bother the sky
with such disparity.

Think of the newborn.
He has no yesterday.

He thinks god is a breast,
that love is a fullness on the tongue,
the swollen lips…
This belief may persist for a lifetime.

Whom shall I ask for words
to console my spirit?

Here is an old song learned in childhood:
“Bye, baby bunting.  Daddy’s gone
a-hunting.  To catch a little rabbit skin…”
What sort of lullaby for a vegetarian?

Will you mind if I hum
as I gather some Lovage, some rhubarb,
some lemon thyme?

With so many apples
I cannot help singing.

“The Book of Daniel the Vegetarian”

This is the dream where I am in a cave in the city wall. The old lions are napping; they’ve had their poached egg and toast. But one youngster is pacing. Even in the dark I can tell he is distressed, the pupils of his eyes muddy and narrow. He hasn’t had steak or sex in weeks. The king had called me to his rooms to tell me his dream so I could say what it meant. His aura was bad. The young lion had the same sort of weak static about him—maybe bad cholesterol. I could think only of Plato and another cave near Hannibal—the voluptuous moss, the bed on a shelf of rock against a wall, the shadows and the lapping of a river running underground. The only fire, the candle of desire I said he would embrace but tell no one, not even his favorite wife. Also to shun fried foods. The king was furious. Called me a name in Chaldean. I knew he had another cave in mind and now this.