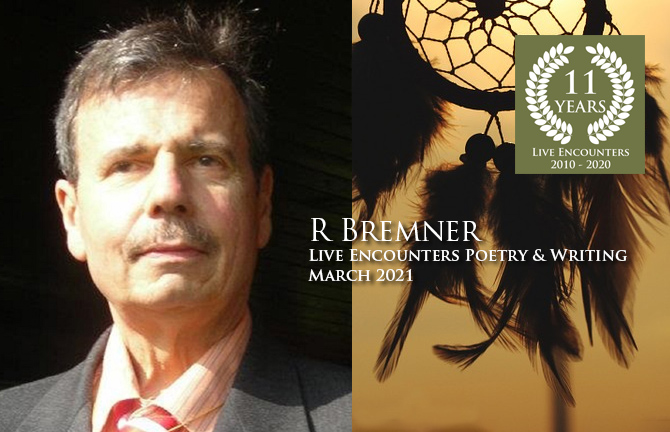 Bremner has been writing of incense, peppermints, and the color of time since the 1960s. He appeared in the legendary first issue of the Passaic Review in 1979, which also featured Allen Ginsberg, and has appeared in International Poetry Review, Anthem: Leonard Cohen Tribute Anthology, Jerry Jazz Musician, Paterson Literary Review, Red Wheelbarrow, and elsewhere. Ron has published seven books of poetry, including Absurd (Cajun Mutt Press) and Hungry words (Alien Buddha Press). He has thrice won Honorable Mention in the Allen Ginsberg awards, and has featured at the Bowery Poetry Club in NYC, at the Brownstone Poets in Brooklyn, and elsewhere. He lives with his beautiful sociologist wife, son, and dog Ariel in wonderful Northeast New Jersey.

Truth, that silent terror
haunts your days and nights
when the skies are torn coats
worn over your forms and faults.
You want to luxuriate in lies
but instead find yourself squirming
and slithering in the truth.

O Lord my God,
Why oh why?
Who asked You to sacrifice Yourself
in an act of suicide?
(I know.  It was your Father.)
It was not me.  I never asked you
to kill yourself.
For my sins!
Yes, You delivered Yourself
into the hands of Your enemies
whom You could have easily flattened.
Or You could have made Yourself invisible.
Escape was Yours for the taking.
I’m sure Your Father would have forgiven you.
What loving father wouldn’t?
Yes it was clearly suicide.
Yet I can’t emulate Your act!
I can’t follow in Your path!
I am not allowed to kill myself.
It is the one and only unforgiveable sin,
Your Church and mine tells me.
The act damns me for eternity.
It’s not fair.  It’s not fair!
What’s sauce for the goose, etc.
It’s my disgrace, dishonor, shame, sin
to have You die for me.
How can I go on with such
guilt weighing me down,
festering in my belly?
But I can’t ever assuage that guilt.
Or free the shame.
Because I can’t take my life as You
took Yours.
It’s not fair.  It’s not fair!

He would unravel so mysteriously and so often
from a dazzling, incandescent gleam of brilliance,
in one moment unfolding to an aberrant wretch.
Needing sustenance, he would feed on my charity,
my honor, my dignity (his was gone in a flash (and
back again in another)),
such as it was, and it wasn’t so much.
Or was it my faith, hope, and charity he sought?
They were far less than his own, which were always active.
A full scholarship to Harvard, and after he quit
came another full scholarship to the Eagleton Institute
at Rutgers – before this zany miscreant dropped out there too.
No peak was too high for his swaggering savvy.
But like Hector, he met his Achilles –  and it was himself.
Trying to pick up the razed and tattered wastrel,
I failed miserably.  If it were drink or drugs that bludgeoned him,
I could have managed – or even schizophrenia, that I
could try to beat…but no.  It was just Ed, the Admiral’s son,
the artist’s son. The world’s most logical yet most
ephemeral man.
An atypical rogue who found his darkness in the light
every time.

Edward O
Messianic thug of puerile intent!
He seeks only to be loved, to have
a panoply of chums and admirers.
What friendship he can’t coerce, he’ll hinder.
A chimera of false friends and mocking cohorts
snidely surround his workaday existence,
dripping cynic drool and vitriol.
Poor Ed.  Poor, poor Ed.  Brilliant, superbly
educated, eloquent, loquacious, poetic even…
will no one take pity on this sprout of the
Groucho seed, this scion of Larry, Moe, and
Curly Joe?  Or is he to be forever Shemp,
forced by the circumstance of being superior
to everyone around him into one fatuous
hejiira after another?


Washed by a sea of stars

My life has been
a musical piece
written in a minor key.

The dark of my days
has been cluttered with
bourbon princesses,
the fruit of visiting ghosts,
superhighway drives to palaces of hell,
unrequited refugees from psych wards,
so many rendezvous that failed,
charmers of no regret,
the occasional cinnamon girl,
the tower which I cannot scale.

I am a ball of twine
that rolls up crumbling mountains
whenever I can.
I wear a long, loud scarf
around my neck
and wish I had wrinkles
to hide with it.
I am a bag lady
with bags of memories
to tell me who I was
before I was wise.
Dresses buttered with flowers
burden my bosom.
Jewels on my fingers
and fragile perfumes
defy the dark grave
that my unborn grandchildren
pass around like a tray
of hors d’oeuvres.

I know that I am as light and airy
as Baby’s Breath
and shall be so forever.