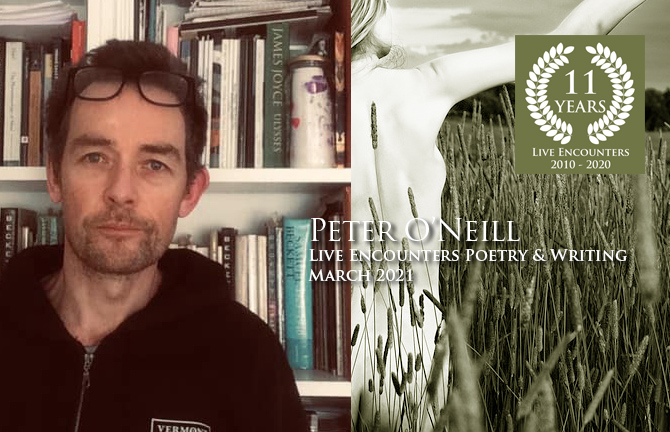 Peter O’Neill was born in Cork, Republic of Ireland, 1967. After spending the majority of the nineties living in France he eventually returned to live in Dublin where he has been living ever since. He is the author of five collections of poetry, a volume of translation The Enemy – Transversions from Charles Baudelaire ( Lapwing, 2015), and a work of prose fiction More Micks than Dicks ( Famous Seamus, 2017). His sixth collection of poetry Henry Street Arcade has been translated by the French poet Yan Kouton and will be published in bilingual format by Éditions du Pont de l’Europe as part of the 200th anniversary of the birth of Charles Baudelaire ( 1821-1867) in association with the Alliance Francaise in Dublin on the 8th April 2021.

Richard Ford had been reading from his newly
Published novel Independence Day
Up in the mezzanine of Waterstones,
While you had been consigned to the bargain

Basement where you read, among other things,
Raymond Parker’s Wines of Bordeaux.
That had been in the spring of 95.
After leaving Dublin in the summer

To speak some French, having just recently
Separated from your wife,
Whom you had left with your son back in France.

So, you were already going through the process
Of a divorce when you met her.
It was ‘complicated’, I think is the term that
They use on social media now.

She was six years younger than you.
She was the perfect picture of youth.
And although you knew that at one stage
She would eventually leave you,

You could not help yourself.
There was a force that was stronger than you
That you just had to obey.

And now, five years later here you were –
Back in Ireland after your time in Bordeaux,
A member of a wine club tasting an Amarone

Della Valpolicella. Having finally split with
Bordeaux, you couldn’t even look at a bottle
For at least a couple of years. The Gironde
Was simply no go; Chernobyl is the term you used!

I remember you saying it, so many years ago.
It was not only a new year, but a new century.
The 21st and you were finished with not only her
But with France, after almost ten years!

It was all finally history! So, embracing
Your newfound freedom, you enrolled
In a wine course in the Dublin Institute of Technology

And discovered newer wines
From different countries, such as Italy.
Amarone della valpolicella was like nothing

You had ever had before. In a burst of cherry
And dark chocolate you left behind the
Metaphysical properties of the Médoc,
And with them your subsequent melancholy,

Only to discover the vitality and force of Ripsasso.
And rather like your situation five years previous,
After almost nine months spent most greviously,
You finally met a new companion in September.

Always in September, your birthday month!
When the summer is ending or turns Indian.
It is the month of amorous encounters,

At least for you. But this latest was to last
Far much longer than those other two;
Twenty odd years, and still counting!

But, I wish to go back some years previous.
Five, or so, to be exact, when you found
Yourself translating Charles Baudelaire.
Oh, it was approximately ten years ago

Just after the birth of your second child
And you were translating Les Fleurs du Mal.
Having spent over ten years living and working
In the city of Dublin, you found the 19th

Century Parisian poet completely astonishing.
How contemporary he was still,
Particularly in a period of financial boom.

As the German philosopher Walter Benjamin
Was to presume, in relation to the Arcades
And the flaneur poet revealed Living!