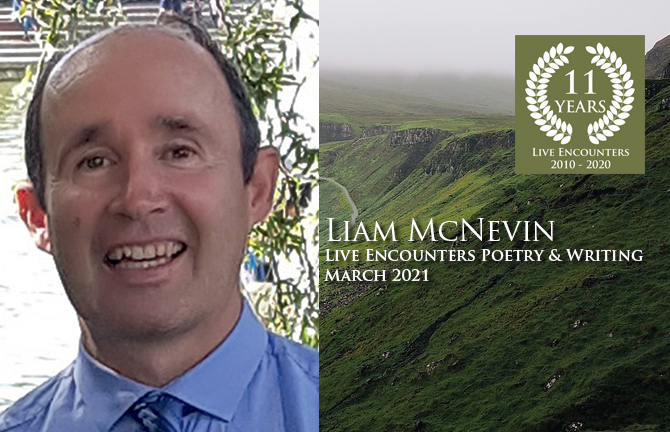 Liam is a member of the Tallaght based Virginia House Creative Writers. Poems have been published in Flare and Boyne Berries, Pendemic and on Dublin South F.M. Other work has featured in Tallaght Soundings anthologies

Turn of the day

Sounds of early birdsong –
piercing and slight-
changes to the season,
more morning than night.
A similar day to others,
cold and damp, of late;
earth succumb to slumber,
spent leaves in its wake.


A difference in the light though,
not noticed before,
at the sight of naked trees
my mind has cause to pause
at ruptures, filial, pale,
creeping on a whim;
Spring’s green elixir
a sprout upon bare limbs.


Birds in the garden gather winter’s waste,
to build and for roost, time to make haste.
There’s a slight stretch to the evenings,’ says
a neighbour across the way; his refrain
a reminder we’ve come through again.

Wind blew from the south

Walking around a big oak tree,
once familiar to you and me.
A series of firsts since you went away,
the weather being fine I came here today.

Nothing seems changed though everything has,
the walk followed by a picnic on the grass.
Seeing couples on the water, bobbing about,
we recited Joyce’s poem, Watching the Needleboats.

A bright day like last time yet different somehow,
ah yes, I remember, the wind blew from the south.
I like to think that wind took you away,
to places vibrant, not prone to decay.

A fishing rod in hand, he paid homage to the weir,
the waters roar and birdsong. Dressed in jumper
and old jeans, he cast in repetitive motion.
A flick of the wrist and now the line probed pools
on the far side, ceased and began again.
Is that difficult to do? I asked.
The fly on the line? he replied,
and put on a display maintaining
there was not much to it, then said
They won’t be biting,
Some days are like that.

The two of us remained there, easy in each other’s company.
What he was doing rubbed off on me
‘for I thought: I get it why he’s here!’

To step away from the routine of everyday
and let his mind wander at random.
It would be nice to nip a fish along the way.