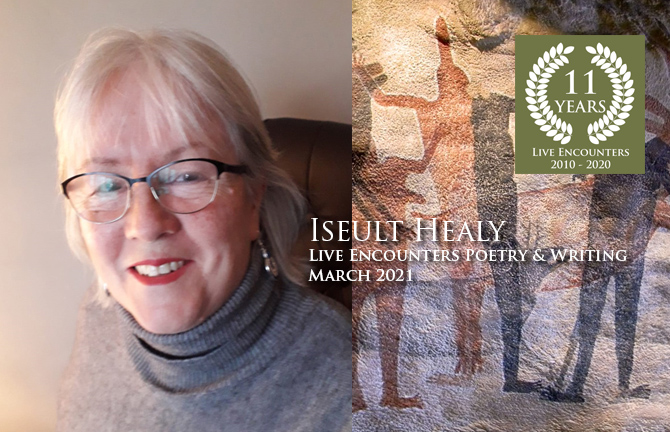 She trained at the Royal Irish Academy and London College in the dramatic arts, also in the Irish Writers Centre and Patrick Kavanagh Centre, as well as several workshops at Over the Edge, Galway. She has also contributed to The Synge Summer School in Wicklow over many years. Iseult is published in the Ponoma Valley Review and Fredericksburg Literary Arts Review (USA); A New Ulster anthology (NI); OfiPress (Mexico); Boyne Berries, Hidden Channel, The Cormorant, The Blue Nib and Poethead (Ireland). She is a member of Poets Abroad, Ox Mountain Poets, Sandy Fields and A New Ulster groups. Iseult was also commissioned to write several screenplays.

I walked once in the wilderness of others
their drifting craziness of unsupportable insanities
that I mistook for fun, adventure and life’s fabric
little knowing they would anchor me to their
revolving door of fecundity.

The shackles of sex and seed need to be shattered
scattered in smithereens amidst the debris
of mankind’s bones in the dust of the world he
once inhabited.  A mere mental pygmy, it was never
his creation, just his graveyard.

I walk with the gods, neither Greek nor Roman –
too young – they cannot understand the true totality
of power unleashed amid an ocean of space sparkled
with diamond thoughts, moons of emotion and
galaxies of powdered dust.

None shall stop me for none can.  Nor will
I stop them.  We shall swim in instant spaces
frolic in sky waters till satiated, then
pretending memory, forget, ‘til once again
the bell sounds, sensations start to
build and balls of beauty are hurtled through
the eons to hit their target amidst the unknowing
souls of some strange place for us to conquer,
be winners and wanderers in search again
for what we are.


I come from a people

I come from a people who ate themselves in death

Whose hollow bellies gnawed within till
tongues shriveled and fell to the ground
whose hearts were denied heat, whose
rained-on-bones were scattered in silent
protest at their Masters and God.

I come from a people at Hungry Rock*
with Heaven’s own view of sea and air
where grew the blackberry and nettle,
thistle, dandelion and hazel,
but a mere bird’s belly fill after
their Masters and God took all else.


I come from a people that walk the roads unseen
whose pitiable cry for succour still
haunts the hills and begs an answer.

I come from a people

we are still here

*Hungry Rock, Sligo, Ireland. During the Great Famine of 1845 – 1851,
it was said that whoever threw a stone at this rock would never go hungry on their journey.

She never does, teeters
at the end of her tether
clinging to no life-line
sheer doggedness

One stop away
from a Halting Site*

*Halting Sites are purpose-built residential accommodation for Travellers
provided by a local municipal authority. Travellers in Irish is An Lucht Siúil
which means The Walking People (also known as Pavees or Mincéirs).
Travellers are a nomadic indigenous ethnic group of Ireland.

In the pity of the night


in painful hope of awaking
a different me

The God of colour

But what have you done?

As for pink…
the pig has better taste than most lovers

made to delight small children with tales of wonder
you created your own rainbow to divide and conquer the
white, yellow, beige, black, blue-black, red peoples

If Mona, Starry Nights, Girls with Pearls, a kiss from Klimt,
a drink from Constable, or a lily from Monet, cannot
bring your sights to sighs then

what hope my canvas?

the only colour you adore, the one you strive for,
the one that unites you all
is the one you invented yourselves

So black you shall have

Do not bother to ask
who turned out the lights

Who put her in?

Who pulled her out?

*Tuam, a small town in County Galway, Ireland, where between 1925 and 1961
the Bon Secours Sisters ran a maternity home for unmarried mothers and their children.
In that period of time, 796 infants and children died from various causes
(including neglect and malnutrition) and were placed in an unmarked mass grave.
This was investigated in 2015.


It may be true that some of the bodies were placed in a septic/sewage tank.