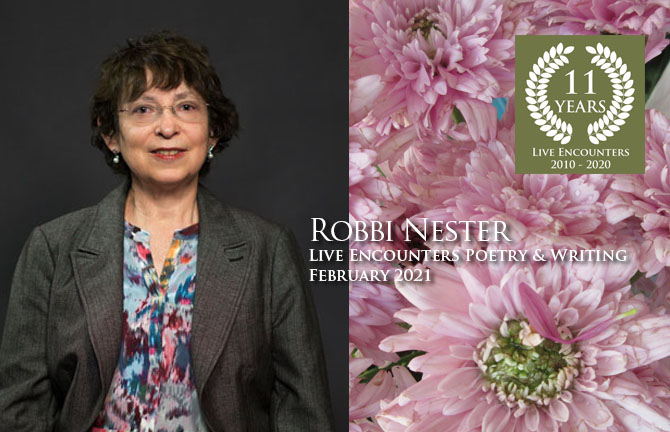 Robbi Nester is a poet, editor, retired educator, and foodie who dreams of being a chef, despite her lack of manual dexterity and untidy work habits. In the chapbook Plated, she has turned her ekphrastic skills to Netflix cooking series, The Chef’s Table and Street Food (season 1). Her poems have appeared previously in Live Encounters, as well as in many other journals and anthologies, including MacQueen’s Quinterly, Verdad, Negative Capability Press, Verse Virtual, Pirene’s Fountain. Forthcoming work will appear in SWWIM, Gargoyle, and Glass Lyre Press’s anthology, Aeolian Harp Volume VI.

That’s what his tee-shirt says—this
accidental chef, aging punk rocker,
reminding us that every dish
requires a death. Looking away
so as not to see the blood, the stained
axe buried in the stump, doesn’t
change that. He’s a celebrity,
appearing on the covers of GQ,
dressed in biker black, but spends
half of his time wandering the Amazon,
learning from indigenous farmers
how to “build a better food chain.”
Brazil speaks through his fingers,
offering us a flavor or a scent
not always comfortable or pleasant,
elemental—the dark taste of ants,
so much like lemongrass and ginger.

He is awkward, full of energy,
out of place in a family
of American achievers.
Never one to take instruction,
he follows his own impulses,
adjusting as he goes,
discovers, in a bowl
of rice and beaten egg,
the flavor of the sea.
Western chefs embrace surprise
arising from the seldom seen,
the never tasted. Japanese
cuisine demands a smaller
repertoire of tastes one
must not alter. Yet form
inspires invention. He wrings
familiar flavor from unexpected
sources, marries old and new,
still hewing to tradition
in all the ways that matter.


The Gift: Jordi Roca i Fontane

He holds his nose aloft, sailboat
in a breeze alive with the scent
of sheepsmilk, the rich
black soil of his native Girona.
Speaking in harsh whispers,
he gestures to his sous chef.
The youngest of three brothers,
he’s the one no one ever
really knew. He follows
his nose into the fields
and forests, plays on odors,
colors, evokes a place and time,
infusing ice cream with the smell
of cigar smoke. “Rainy Forest”
transports us to a shady path
where pine cones litter the dirt.
A waiter pours a glacier
distilled from the bitter essence
of earth, carries miniature trees
laden with ovals of gold-green
olive sorbet to each table.
Another dish sports a pearly
sphere of spun sugar, enticing us
to take up a spoon and shatter it,
releasing a confetti of carrots
and orange beets, bits of sweet color
that surprise the palate, delight the eye.

A Story of Survival—Ana Ros

In a wild country of mountains and rivers, she left one path
but found another, buried under snow, among the pine tree’s
fretted roots. As a child, she wanted only to please
her parents, excelled at everything she did– becoming
an Olympic athlete, training to be a diplomat.
Her father, a doctor, prepared her carefully to leave
remote Slovenia and make a life of honor and respect.
But she didn’t go. “Because of love,” she says, “
we sometimes create catastrophes.” She met her husband,
sommelier at his father’s inn and restaurant. He served her family
dinner, expounded on the energy of well-paired food and wine.
They married, traveled, and she prepared to take a post abroad.
But when her husband’s father died, leaving him the restaurant,
she had to choose between the life she planned for and her marriage.
She left that life to be a chef, without an inkling how to do that job.
She faced her parents’ wrath, took instruction from old cookbooks,
from farmers and artisans who raised the animals, made the wine
and cheese, tended the hives, and found in this a freedom far from
her former regulated life. “I’m proud of my audacity,” she says.
Not as a diplomat, but as a famous chef, she represents her country.
People travel here to sample foods known nowhere else: marble trout
and Dreznica goat, aged wheels of Toulmin cheese. She draws
a rich abundance from imagination’s stream.