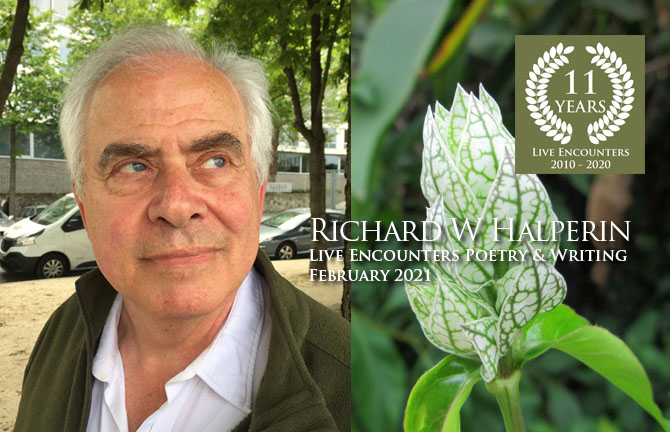 What do I remember?
The silver prose of The Great Gatsby
And the teacher Brother Francis who taught it.

Walks to The Cloisters,
The only Europe I knew
Except for Rizzoli’s book shop on Fifth Avenue.

A New York now changed
Beyond recognition for me,
Which has become my Jolly Corner.

Friends whom I hope to meet
In heaven, because if not there,
Never.

A silver cloud
Which I thought was
Solid reality.

Fifteen-year-old I,
Twenty-year-old I.
Tennessee Williams

Alive and writing.
Wagner not the composer
But the Mayor of New York.

A silver cloud
Shimmering like East Egg and West Egg,
Which blew away forever.

What if Paris had no chimney pots,
Had no wistaria trees? – and they are
Everywhere. My Paris, in a way, because
To notice is to make something ‘my’
As either a convenience or a necessity
To help with or to deflect from the project
Of living. I have read tonight a poem

By a friend whose poems are like cognac,
They burn, they glow, they daub the day
He is living, they help me because I cannot
Write like that. I am glad I am still living,
To read poets as gifted – excuse me –
As Homer or as Arthur Miller, who put
One word down after another so that living
Gains nobility. One does not need gods,
And yet (Homer) gods are not décor.

Joshua Logan wrote an American version
Of The Cherry Orchard: The Wisteria Trees,
With Helen Hayes, Kent Smith, others as gifted,
Chekhov who insisted The Cherry Orchard
Be played as a comedy. Only virtuosos
Can begin to do that.


Most of my poems are about myself. This one
Is about others. They accompany me, they
Inspire me. They say things that I had never
Thought of. Leonard Woolf said, after
The death of an old friend, ‘The soul
Deserves to be immortal.’ This poem is
Names stuck together, mine not among them.
I only recognise whatever I am when I
Bump into others. What will I remember

If I wind up on the other side? That everything
Got stuck together where I came from, I
Somewhere in it.

A Terrible Year, Nearly Over

The curiosity to see what will
Happen next, keeps me going.
I am in my late autumn. In winter –
Winter means death, dear reader –
Things sleep; maybe stir.

I lean against the window; look out;
See leaves blow off. They will not
Be replaced. The new is not the old.
Siegfried Sassoon, that ardent
Soul, has never been replaced.

Jesus ascended. He did not want
To stay. We killed his curiosity.

A few people are praying for me tonight
And I am glad of it. I myself pray,
However well or ill, for a few people.
I think well or ill don’t count. A prayer

Does not crumble. Buildings crumble.
Friendships, some of them, crumble; this,
I have seen; when they do, they give off
A mellow light. Do poems crumble? They might.
Prayer does not crumble. A shocking hypothesis.

In Memory of Atlantic Avenue

i. The Sick Wife

A sick wife.
She speaks, then she dies.
Then her husband speaks,

I do not know
About one hand clapping.
I do know, thanks
To the divine Waley,

Exactly how it feels
To enter a room
Which I never left.

ii. The Girl on the Train

Well before I knew my wife, she was
The girl on the train. When we met,
She said she loved taking trains
To places she had never been.