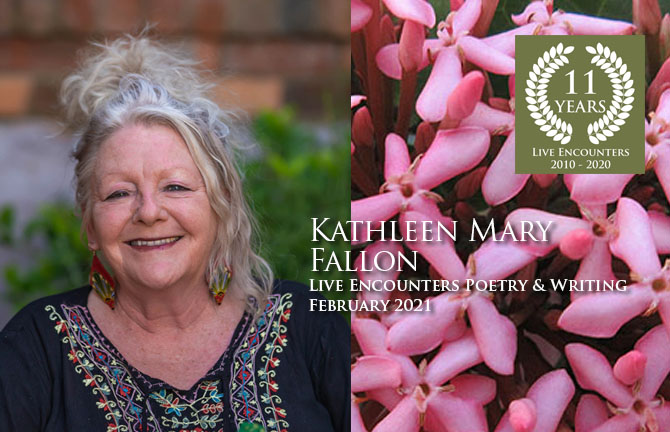 Kathleen Mary Fallon most recent work is a three-part project exploring her experiences as the white foster mother of a Torres Strait Islander foster son with disabilities. The project consisted of a feature film, Call Me Mum, which was short-listed for the NSW Premier’s Prize, an AWGIE and was nominated for four AFI Awards winning Best Female Support Actress Award. The three-part project also includes a novel Paydirt (UWAPress, 2007) and a play, Buyback, which she directed at the Carlton Courthouse in 2006. Her novel, Working Hot, (Sybylla 1989, Vintage/Random House, 2000) won a Victoria Premier’s Prize and her opera, Matricide – the Musical, which she wrote with the composer Elena Kats-Chernin, was produced by Chamber Made Opera in 1998. She wrote the text for the concert piece, Laquiem, for the composer Andrée Greenwell. Laquiem was performed at The Studio at the Sydney Opera House. She holds a PhD (UniSA).

Prayer at the death of Helen Daniel

She
self-mutilated stabbing in punitive punctuation marks, scored out spelling mistakes, broke open her skin to erase every broken rule of grammar or syntax, every semantic misstep, gouged words and their etymology, their dictionary meaning, their literal meaning, their phonetic symbols into deep meat

She
honed daily the little bone-handled penknife in an act of ritual readiness, poised the point of the letter opener to lance and lacerate, pared with the serrated kitchen knife parsings in parentheses

Because
to make a slip and be wrong, to make even the smallest slip whatsoever and be seen as slipshod, to ever be at all in any way wrong, required, of utmost necessity, a mortification, a visible and readily apparent bloodletting act of contrition

For
those pompous, self-appointed Authorities and Experts who had taken it upon themselves to be forever vigilant on the wait and watch − red pens poised and at the ready