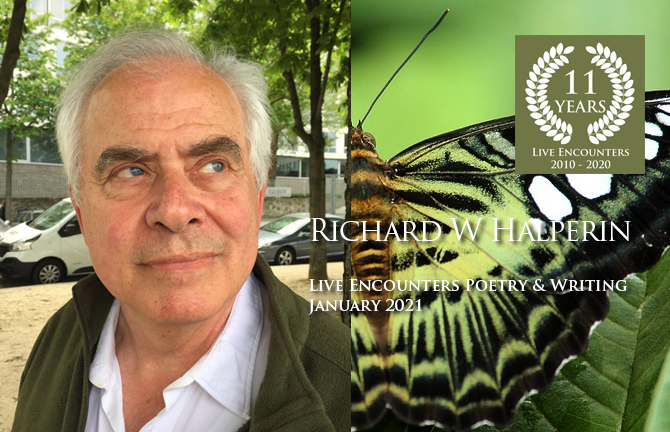 I once stood in front of a wooden temple in Bangkok.
The shadows it cast were cinnabar.

In Japan the shadows, green and blue, on the sea
Were not the green or blue I had expected.

Shadows are in air first, maybe that explains it.

In the graveyard on Inis Meáin the shadows of mounds
Spread over the ground and sink into it.
When I visit I am awkward but my shadow has the hang of it.

America is far in my past now, I remember it by its shadows.
Edward Hopper shadows, James T. Farrell shadows.

The red light in my father’s darkroom.

I see across the sea many friends who were.
Maybe that is why recently I want to be
By the sea. By the green of the sea.

I see in the distance a temple
in the Far East. I have been

in a few but not this one
and am glad to be in it.

I am in Paris during confinement
so where can I go?

and so am glad to see the temple.
I think it is in a valley in a city.

I mount the steps, wood.
I enter the temple-part of the temple.

There are no walls only pillars and grilles
supporting the Asian very Asian roof.

I see flowers lying all around,
I refused to buy any while entering.

I see other worshippers, not many,
worshipping silently, I, too, silently.

There is an odour of sandalwood
and indeed everything is of wood.

The temple if it is a temple
creaks in the wind if it is the wind.

and think maybe this is Bangkok.
I take in the fact that all the wood

is painted cinnabar,
that the roof if it is a roof

is not so high as to be enthralling,
and am happy about that.

A college friend with whom I had had a tiff
went away, meaning, he died. My mother,
with whom I hadn’t had a tiff, went away,
meaning, she died. What was I supposed to do,
call the police? I think the gentleman
in the parlour understands. He sits
by the fire, reads, looks at the rain striking
the window, writes a little or so it seems
to me, talks to anyone in an easy way,
is a good listener as I have reason to know.
I myself have always liked rain. Traces.
Once I, too, was a little boy in short trousers
who was not as happy as everyone told him
he should be


If I Draw a Circle in the Sand

Old Uncle Ralph, sitting in his chair,
interpreting, is the bore at the party.

Listeners are listening to their own
inner worlds anyway.

Rocks and pine trees and bluebells.
Still, small voices. ‘Here I am.’

If I draw a circle in the sand and step inside it,
I start to suffocate.

I think a three-legged dog will lead us all to heaven.

I live in France in French.
If someone had told me
At age five in Chicago how
My life would turn out,
I would have fainted.
Oz and Ozma were enough.


I have never got used to anything.
Every sorrow, every happiness,
A shock. What has sunk in is that
My real name cannot be Richard.
When I am dead, I’ll find out
What my real name is.


Walks in Paris. As in walks in
My past cities. A walk among
Maquettes. When the tiny grandchild
Of a friend here asked me to
Pronounce Richard in English
And I did, he died laughing.


Sometimes on the street,
I do tune in. To the rue d’Estrées,
For example. To skateboards.
To pooches (peach). To potholes,
Which in Paris are convex.
But also:


A dear man, Franz of the Discophile
On Eighth Street, New York,
Once told me – I twenty, he fifty –
That when he lived in Paris,
He had been part of the huge crowd
Watching Chaliapin’s funeral.


Sometimes, me too now. I
Am standing next to him. The bier
Passes. We smile at each other.