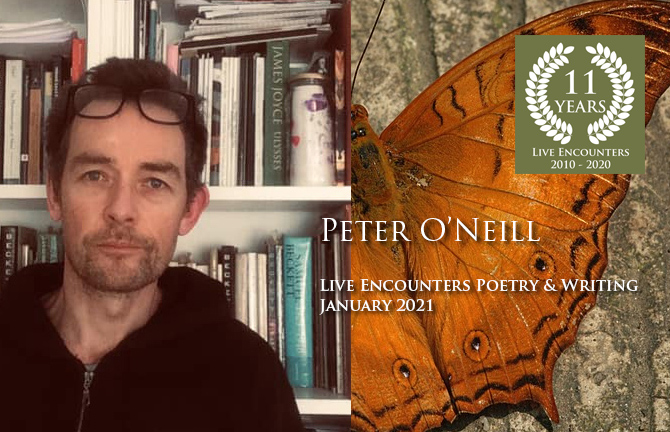 Born in Cork in 1967, Peter O’Neill is a truly international author in scope whose writing has been translated into French, Italian, German and most recently Arabic, he has had five collections of poetry published, a volume of translation The Enemy – Transversions from Charles Baudelaire ( Lapwing, 2015), and a work of fictional prose More Micks than Dicks, a hybrid Beckettian novella in 3 genres ( Famous Seamus, 2017). With a background in philosophy and comparative literature, BA & MA respectively (DCU ), he is currently working on a number of writing projects in connection with Baudelaire in preparation for the 200th anniversary of the poet’s birth; he will be hosting a series of discussions and readings on the 8th April next spring for the Alliance Francaise  Dublin when his sixth collection of poetry Henry Street Arcade, a bilingual work translated into French by the poet Yan Kouton, will also be launched as part of the festivities.

The minute I saw you standing on the quay,
Wearing that T-Shirt with the giant love heart,
I knew that it had been a mistake to have followed
You on a plane and then a train to your hometown

Of Bordeaux. I should have just met you in a bottle,
Like most lovers do. Oh, but that would come,
That too would come. You see there is a lot of irony
Contained in my poem. But no, I had to go. I had

To go and see you. I had to get on a plane and see
It through and step off that train and reach down
To greet you only to try to feel the heart beneath

The heart beneath your T-Shirt. And when I did, you drove
Me home and that very night when we made love while
You played Jeff Buckley. I watched you make love

To Jeff Buckley. It was a sign of all that was to come,
As I realised then that you were not in love with me
But were in Love rather with the idea of being in Love,
At least like the love in a song by Jeff Buckley.

And he had just died that year!
The portents were dire, it was quite clear.
The love that you had was disproportionate,
It was why the Love heart on your T-Shirt did not fit.

You had designed the colours in black and blue,
Like the colours of domestic abuse,
All accentuated by a ring of bright yellow

Which as everyone knows is the colour of madness.
Your heart was filled with madness.
The truth is I never wanted to come.

Some loves are but a summer’s worth,
The stuff of Shakespeare’s mirth.
I had never wanted to go with you,
You remember, I had explained it to you?

That day in Cork up in my cosy study
Where you had posed for me in your summer dress.
Do you remember how you looked in that summer dress?
You looked like an Amazon being the Ideal.

And you knelt down beside me and stared into the sun.
The behemoth gazed and warmed you from afar.
Its rays crossed a universe to touch your knee.

While you spent that morning talking to me,
And how it was inconceivable that we should not
Return to Bordeaux together, or lead a life together!

I was not convinced but took your advice and thought
About our many incompatibilities. The fact that
You were still young and in the middle of your studies,
While I was a wannabe writer still in my thirties!

Oh, your mother was going to love me, but that was
The point, she too was a bit of a hippy.
After our time with Jeff, we sat down and had dinner
And I realised that we had a lot to say to one another.

We talked over great food and good wine,
I still remember the Haut Médoc and the medallions
Of foie gras which your mother sliced over our salad.

And how you looked in that summer dress
When you came out on the balcony to talk with us.
And how the sun’s rays had crossed a universe.

After a short week we moved out of Merignac
To number 22, Rue de la Liberté.
It was the ground floor flat given to us by your
Aunt Arlette who along with Helmut

Had been so generous in their support of us.
You had already installed a double bed and a sofa.
All your books were on the shelves; the collected works
Of Carson McCullers and Paul Auster.

Your rack of CDs too with Heitor Villa- Lobos,
Joaquín Rodrigo and Isaac Albénis
Whose Mallorca, Opus 202

Continues to haunt me any time I hear the tune
And which for me is so evocative of you.
How many hours did I plunge wine-soaked in its memento mori?