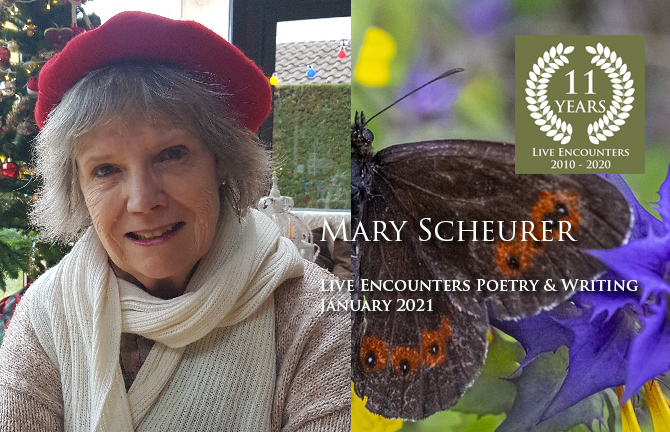 Mary Scheurer is a newly retired Philosophy and Literature teacher. She lives in France and is a member of the Leman Poetry Workshop in Geneva. She has worked for the last ten years with a quartet of European poets who met on an MA course at Manchester Metropolitan University. Her writing has been published in The Literary Bohemian, Bare Fiction, The Stony Thursday Book, ‘On the Edge’ ‘Notes from a Fragile Planet’ (Leman Poets) – in the Word Aid anthologies ‘Did I Tell You?’ and ‘Not Only the Dark’ – and in the August/September 2020 issue of ‘Philosophy Now’

Were she to lie on her back, up there
on the top of a mountain and look up,
she would see stars file by and feel assured
the Earth is still turning. From here that seems
too hard to believe. Nothing moves, we are
suspended, weightless, trapped in limbo.


‘I’ll crown you!’ mother would say, when vexed.

Walking alone through empty streets,
past deserted gardens, spring flowers wonder
at the silence. Is this peace or neglect?
Blossoms, white or pink, reign glorious
shifted only slightly by light winds.

Prayer is the raising up of the mind and heart to God.’ Let us pray.
At five years old she was chosen
to place a wreath on the Virgin’s head.
‘What an honour’ mother said.

Does she sense the planet sigh? Remission,
relief? All the scolded children are confined
their squabbling silenced, mischief curbed.

‘I’ll crown you!’ mother had said.

Apocalypse is a clumsy word: too long
histrionic, leave it be. Will our fever
be worse than the fires that raged –
our breath as short as the air dispossessed,
forests butchered, oxygen short?
If we recover, will we learn? Why would we?

Leaving her clothes on the ochre sand
she pushed out, feet against grit: skin slaked
warm and cool, silken sheet of wetness, wild.

Water listed to the line beyond – horizon:
longing welled. She tilted, then toppled
into empty. In the fall she glimpsed

world’s end. A pulsing spectrum of light;
cataract, rainbow over spume, spilling
into the void of that vacuum below.

‘So they were right’ she mused. Gravity dulled,
dropping endless. ‘The Earth is flat after all.
Would I had honoured its boundaries.’

Foolhardy though, she had willed herself to
the beckoning plenty, limitless spheres.
Too late. Weathering to relief, impotence,

nothingness drew her in. Sightless, no pain,
no joy, she waited, egg-like, in the curve
of a question’s womb, accelerating still.

You need nothing more than your shoes, your key
striking out from home as the world rolls by
no thoughts, no plans, but a slate-blank mind
and a listening, empty chalice to fill.

Treetops fluster as crows nest, their racket
a trouble-laden blur. Walk on until it fades.
Steps advance to silence: soaked hedgerows,
a medley of singing greens. Hawthorn, a whiff
of childhood’s nonchalance. On, through fields
and the buzzing of Earth’s hives, plenitude.
On, beside the river’s pungent loam, on
past measured vines, haphazard poppy fields.
A vegetable patch, molehills, paddocks,
a chestnut filly nickering good day.


All this within a stone’s throw of home
speaking gently through the souls of your feet.

That moment when the pebble, thrown,
hovers, transfixed, about to hit water,
its would-be weightlessness belying a drop
set to pierce the mirrored surface glaze.

Tense as tightrope, the horizon is approached
by sun, its disc threatening that solid line,
trait between shade and shine, neither night nor day
poised, impenetrable, untrodden still by light.

Or that pause, as mouths approach, drawn breath
about to be released into a melting. Nearness,
lips not quite touching, the imminence of
a kiss: currents singing in the yearning air.

And where is fixed the second when a flower
is prompted to draw in its petals, sleep safe
as night falls: soft fingers folding shelter
round the contents of its pollen-heavy palm?

Both hands pointing skywards, twelve o’clock
ticks out that old day and ticks in this new,
a pinpoint in our particle of time. Point zero
tilting to the footfall of what could be to come.

We forget the warmth of snow, its attentive silence
willing us towards wood fires, a welcoming hearth,
a mother’s beckoning arms; snow kindling a softness
in the eyes: Zhivago’s Lara; flakes settling like hope
in Karenina’s hair, brushed to silk for Vronsky.

It is many years ago; such snowfall as closed school early
sprinkled liberty and swelled the spirit. Drifts of relief.
To cherish its quiet and lack of blemish, walked with us
that three miles treck, aimlessly through mute fantasies
and back homeward to a warm blanket and sweet tea.

Snow is a story-teller. ‘A Child’s Christmas in Wales’
filled with aunties, uncles, flurries of mischief, laughter.
It is that time the boy Scouts, after midnight mass
came back to flood the house with song, supping sherry,
and the scene tipsied into itself: careless and gay.

It is the once-a-century blizzard that froze transport
had us take out skis to reach the bakery. Turned our eyes
to small birds, fluttering white in frosted branches,
then back through silent rhapsodies of hush. Indoors
dark windows shrugged off shows of down and crystal.

Snow is the soft seal on mother’s grave, one January day
while Father McGarry sang her praise and we recalled
her life. The sky threw down the white carpet, last tribute,
as frank and spotless as she was. Snow spoke with her voice
sprinkling solace, gathering us to her ever-presence.