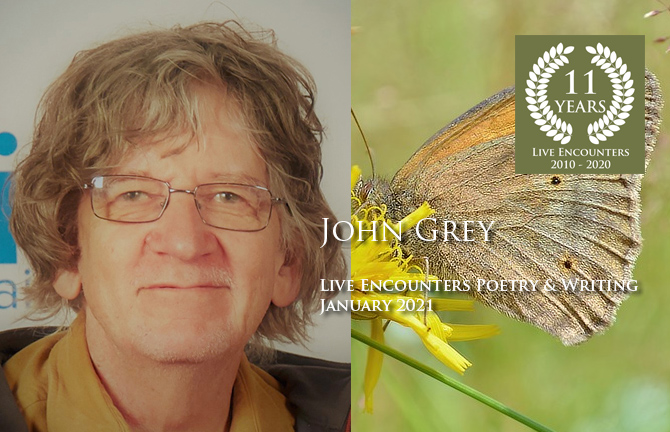 Nobody Home in C Minor

I’ve been playing this on my guitar
for the past week or so.

It’s a theme built around the time
I crossed the street
though there was no point in doing so.

The first chord is
no car in the drive.

The second is
no lights in any of the windows.

The third is me
stumbling up the stairs
and pushing the front door bell.

It’s in the key
of that sound I heard
from inside the house –
a hollow ring
like a breeze gently tingling
a dead Gypsy’s earring.

The kids are digging holes again.
They’re at the fresh loam in your garden
because it’s easier there.
With their hands, with tiny spades,
a sharp stick, they don’t care.
Maybe they want to see worms wriggle.
Or it’s prison and they’re making their escape.
Could be they can’t stand idleness
and they must do something
even if it’s nothing.
Watch them at the beach
with sand shovel and bucket.
They don’t build castles.
They scour out hole
after hole after hole.
Some are even foxholes,
big enough to conceal them.
Maybe, like your grandmother,
they’ll even dig back yard holes
to hide their valuables
from governments and banks.
It doesn’t pay to ask them what they’re doing
because they don’t know.
In fact, they don’t even wonder.
It’s you and I who look out the window,
sit on the beach, ask ourselves
what’s with kids and their holes.
As if we never dug ours years ago.
We thought that we’d reach China.
But we only got this far.

It hit me then
that I was minus a woman.

If she didn’t slip away
on the lounge lizard’s
greasy tongue
or wasn’t picked up
by the tattooed muscular arms
of some sun-fried beach-hunk
then she must have come
to a self-realization
like all the worst people do –
I can do this on my own.


Actually, she was there
where she had said she would be.
And I had forgotten all about
the place we were supposed to meet.

It didn’t so much hit me then
as start me doing it.