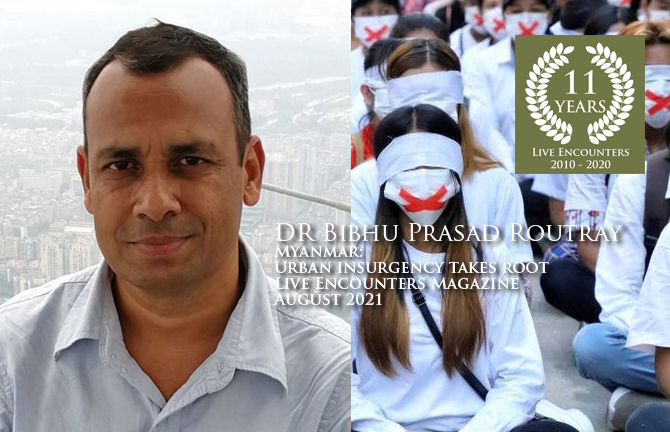 Dr. Bibhu Prasad Routray held the position of Visiting Professor and Indian Council of Cultural Relations (ICCR) chair, India Studies at Murdoch University, Perth between July-December 2017. He served as a Deputy Director in the National Security Council Secretariat, Government of India and Director of the Institute for Conflict Management (ICM)’s Database & Documentation Centre, Guwahati, Assam. He was a Visiting Fellow at the South Asia programme of the S. Rajaratnam School of International Studies, Nanyang TechnologicalUniversity, Singapore between 2010 and 2012. Routray specialises in decision-making, governance, counter-terrorism, force modernisation, intelligence reforms, foreign policy and dissent articulation issues in South and South East Asia. His writings, based on his projects and extensive field based research in Indian conflict theatres of the Northeastern states and the left-wing extremism affected areas, have appeared in a wide range of academic as well as policy journals, websites, and magazines. Article republished by permission of www.mantraya.org Since the 01 February 2021 coup, the civilian non-violent resistance to the Tatmadaw (Myanmar military) has changed its character. In the civil disobedience movement, placard-bearing protesters appealed to the conscience of the international community, only to be crushed by the military. Since the end of March, in many parts of the country, collaborators and sympathizers of the regime have been systematically targeted by attackers who may have been trained by the ethnic armed organisations. An urban insurgency has raised its head. While it may not be enough to shake the regime, forcing it to reverse the coup, it will certainly drain the military off vital resources and delay its project of stabilizing the country.

In the morning of 2 June, a group of anti-military resistance fighters ambushed a convoy of four vehicles carrying police and military personnel near a hill in Kanbalu of Sagaing Region. Using improvised explosive devices (IEDs) and hunting guns, they killed a police sub-inspector and fled leaving behind their firearms after military personnel arrived in the area from a nearby location.[1]  On 27 May, eight explosives went off in Yangon’s Thaketa Township in police stations, a local market, a primary school, and on the streets. While the damages were minimum, in another incident on the same day, three unidentified gunmen shot dead a local ward administrator.[2] On the same day, in the southern Mon state, two unidentified gunmen shot dead U Myint Swe, a regional lawmaker belonging to the Tatmadaw (Myanmar military)- aligned Union Solidarity and Development Party (USDP).[3] In yet another incident, five people including an official administrator were injured in a homemade bomb blast at the village administration office in Ye township of the same state.

These are among a series of ceaseless attacks—shooting, bomb blasts, ambushes, stabbing, and parcel bomb explosions—that have taken place in different parts of Myanmar in the past three months, in opposition to the military coup of 1 February. The media has reported only a few of these incidents. But it is largely believed that the number of such incidents are fairly large and difficult to quantify under the circumstances. A conservative account of the dead and injured in the attacks are over a hundred, till the time of writing this article. Even as the popular non-violent civil disobedience movement, which aimed to reverse the military coup of 1 February, is slowly losing steam, in the face of the military’s brutal repression, a new urban insurgency is taking root.

Police officials and stations, soldiers, government offices, installations of the Tatmadaw and government officials like the ward administrators have been particularly targeted in these attacks. In Yangon’s Sanchaung township, at least two security forces were killed when explosives were lobbed into the General Administration Department (GAD) office in broad daylight in May. A soldier on sentry duty there was shot dead from close range. On 8 March, the residents of the same town had been subjected to a 12-hour siege by the troops in search of protesters. On occasions, basic education schools have been targeted, in defiance of the Tatmadaw’s move to open them. Boycotting education is a part of the nationwide civil disobedience movement. Some of the schools have also served as military camps. Explosions have also targeted at least one hospital linked to the military and the Tatmadaw’s recruitment centres.

Among government officials, the military appointed ward administrators have come under specific attacks. For instance, Bhone Ngwe, the local ward administrator shot dead in Yangon’s Thaketa township, had gained in notoriety for tipping off the security forces regarding the activities of the anti-government protesters. Myo Lwin, another ward administrator in the Lanmadaw township too had similar record. Locals had accused them of cooking and feeding the junta’s troops and accompanying them at the dead of the night to point at the houses of the protesters and the pro-democracy activists.

On occasions, the intended attacks have gone awry. For instance, a bomb planted on a street claimed the life of a cleaner in the Shan state, as he picked up the packet on 28 May.  A bride was killed in Yangon as she opened a gift packet meant for her partner, who was suspected to be an informer for the Tatmadaw.

In the media reports, these attacks have mostly been blamed on unidentified persons. Searches conducted by the military and interrogation of arrested persons, however, have started throwing some light into what currently appears to be an unorganized, but rather expansive violent resistance movement. The available narrative, both from official accounts as well as media sources sympathetic to the pro-democracy movement, do fill in some of the knowledge gaps regarding the origin of these attacks and reasons for their continuity.

The source of such violent resistance can be traced to the military crackdown induced mass migration of the youth from the urban centres into the safety of the areas held by the anti-Tatmadaw ethnic armed organization (EAOs) in the country’s periphery. Some of these youths appear to have put their stay in those areas to productive use and upgrade their skills to assemble IEDs (described mostly as homemade bombs) and practice ‘hit and escape’ operations. The military also believes that some of these youths have trained along with the groups like the Karen National Union (KNU). This tactical alliance has possibly resulted in an army of trained attackers. While some of them could be aspiring to be a formal part of the People’s Defense Force (PDF), the armed wing of Myanmar’s parallel National Unity Government (NUG) of the opposition political parties, a large number of them seem to be taking on the military’s brutal repression with a tit-for-tat strategy.

According to the Irrawaddy, number of these trainees could be ‘at least several hundred, including doctors and other young professionals’[4]. They also include celebrities like ‘a former beauty queen who represented Myanmar in the Miss Grand International contest, Htar Htet Htet, to Han Htoo Lwin, known as Kyar Pauk, the lead singer of punk rock band Big Bag’.[5] Their statements, amplified on social media platforms, could be encouraging many others to join the same. Personal loss in military brutality and a sense revenge could be additional motivational factors, in addition to the urge to restore democracy. This is an ongoing trend and is unlikely to be disrupted unless the military finds a way to target the source, i.e. the training facilities in the EAO held areas.

During return to their respective cities, these trained men have carried explosives and weapons like pistols and revolvers to be used in the attacks. In other states, people who identify themselves as ‘resistance fighters’ have used their hunting guns in these attacks.  In early May, the Tatmadaw claimed to have arrested 39 of such trainees in Yangon. 20 more people were arrested between 13-17 May. Again between 21 and 23 May, another ‘two-dozen’ people were arrested and ‘2080 homemade bombs, 44 time-bombs’ were recovered from them, also in Yangon.[6] Despite the arrests, attacks have continued. Posts in social media by the anti-regime ‘resistance forces’ continue to threaten a step up in attacks in the coming weeks.

Insecurity in the Air

In spite of their increasing frequency and casualties among the targets, these attacks have mostly remained crude, small scale, and seemingly uncoordinated. Executed mostly by ‘lone wolves’, large percentage of these explosions have either resulted in minor or no casualties. At the most, small teams comprising two to three members have participated in shootouts. However, the frequency and spatial spread of these attacks have been a source of lurking apprehension for the troops. These have severely restricted the movement and impunity with which they operated in the early days. Local media in Myanmar reports the soldiers manning the entry points of government buildings have all retreated inside the newly created outposts.

Few of the ward administrators have resigned after assassination of their colleagues. Offices and military installations, the visible symbols of de-facto power in the urban centres, have been barricaded with sand bags and high fences with wire mesh. Even the newly opened MoeKaung Treasure Maternal and Child Hospital in the compound of the Military Documentation Office in Yangon’s Yankin township has been fortified by armed guards and sandbags on the rooftop, reports Irrawaddy. Under the circumstances, the narrative of ‘every civilian is a potential attacker for the military and every military trooper is a potential target for the attackers’ seems to be holding true. It is a classic case of an active insurgency instilling a sense of vulnerability in the very forces of the regime, who have been assigned to blow out dissent.

This violent resistance is certainly an unanticipated outcome of the 1 February coup. More than fourth months after its decision to undermine the popular political choice, the Tatmadaw finds itself struggling to establish order in the country.[7] As it attempts to prolong its rule by banning the National League for Democracy (NLD) and dismantle other edifices of democracy[8], the rise of an urban insurgency will invariably drain its resources and delay its project of silencing dissent. The objective of spreading fear among the masses to extract legitimacy, which is a vital component of dictatorial rule, is likely remain an unfinished project, in the near to medium term.

While reversal of the coup and implementation of the results of the parliamentary elections are the unspoken goals of this urban insurgency, its success, in the short to medium term, will be measured by its ability to continue in the face of brutal and vindictive military campaign. Violence by the insurgency would be used by the Tatmadaw to intensify its operations. In some time in future, the insurgents would find it necessary to align their actions with that of the opposition’s National Unity Government (NUG). While dispersed violence has its own utility, at some point of time, they would find it necessary to coordinate their actions under a loose leadership which will provide direction to their action and provide clarity about its end objective. If they succeed in continuing, closer strategic alliances with the sympathetic EAOs and constant upgradation in the quality and frequency of attacks are likely to follow.

The Tatmadaw is still a very powerful institution. Defeating it won’t be either an easy or swift affair. But an urban insurgency, working in support of the NUG, can create sufficient pressure points for change, which peaceful protests have not been able to managed to do.

[2] “Eight explosions and the shooting death of an accused informant reported in Thaketa”, Myanmar Now, 27 May 2021, https://www.myanmar-now.org/en/news/eight-explosions-and-the-shooting-death-of-an-accused-informant-reported-in-thaketa. Accessed on 31 May 2021.