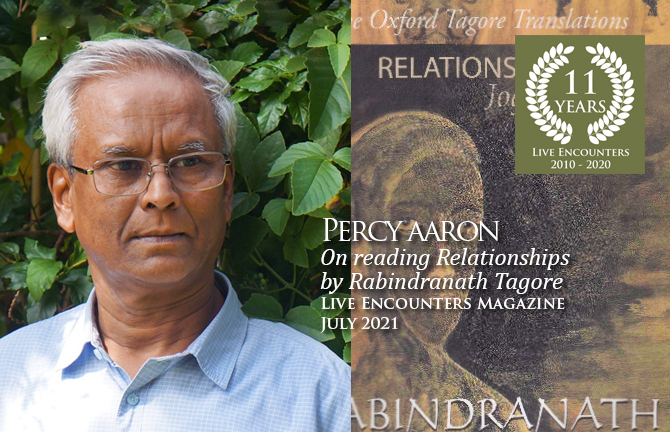 The story was first serialized in the literary journal Bichitra under the title Tin Purush. When it was published as a novel in 1929, Rabindranath Tagore changed its name to Jogajog. Supriya Chaudhuri, the translator of this edition, the fifth in the series by Oxford Tagore Translations, opted for Relationships as the word nearest in meaning to the author’s original choice. The book contains a note by Tagore as to why he chose Jogajog and the translator, in her longish introduction, explains her choice of Relationships.

The story revolves around the Chatterjees and the Ghoshals, two families locked in a feud that goes back some generations. While the former have fallen on hard times, the latter have seen their wealth grow rapidly within one generation due to the acumen and single-minded ambition of Madhusudan, the head of the Ghoshal family.

Bipradas, the scion of the Chatterjee clan is in declining health, physically and financially. Marriage has passed him by for a variety of reasons. Madhusudan is single too but now that he has accumulated great wealth, he wants a wife, but not just any wife.  He has his eyes set on 19-year old Kumudini, the unmarried youngest sister of Bipradas.

Kumudini Chatterjee, the main protagonist, is “beautiful, tall and slender like a stalk of tuberose; her eyes were not especially large, but they were deep black, and her nose was drawn exquisitely, as though made of flower-petals. She was as fair as a white conch-shell with two graceful hands whose ministering touch was like the gift of the goddess Lakshmi; one could only accept it gratefully”.

If her physical description is quite over-the-top, her skills in other areas are equally so. In chess, she is “so skilled that Bipradas had to play with some caution” and “Bipradas’s hobby was photography. Kumu too learnt the art”. She knows Sanskrit, reads the classics and is an accomplished esraj player. One gets the impression that had she taken up tennis, she would have won Wimbledon.

Her brother Bipradas is “handsome as a god” and skilled in everything he touches, be it chess, the classics, Sanskrit, playing the esraj and hunting. Despite not being a very believable character, he does come across as likeable. One gets the feeling that had he been as good in business as he was in the arts, the family would not have been in such dire straits financially.

The hagiographic characterization does not stop with Kumudini or Bipradas. Their father “was tall and fair-skinned, with a mane of shoulder-length hair and large finely-drawn eyes whose gaze bespoke unchecked mastery……” He “possessed great strength and a handsome body…”

Besides having all these exceptional qualities, the ‘good’ people are invariably tall and fair-skinned, while the others are not. While “Madhusudan was not ugly, he was exceedingly hard-featured. What struck one immediately was his dark face….. His wiry hair was as curly as any African’s…. He was short… His arms were hairy”. By character, he “was obsequious in his politeness, his face lit up constantly in hospitable smiles” especially when he was with English people. Shyamsundari, the widow of his elder brother, is “dark BUT beautiful” – as if these two qualities are incompatible. That she has an affair with Madhusudan is contemptible.

The lopsided characterization of the ‘good’ people versus the ‘bad’ people continues with little attempt to balance out the characters.

It is the mindless superstition that makes Kumudini such a bogus unattractive character.  In a letter to the poet Radharani Debi, Tagore tries to explain his heroine. “She had installed in the figure of her deity the complete ideal of manhood that inwardly, unknown to herself, had attracted her mind on the threshold of adolescence.  In point of fact, she had given her womanly love in the guise of worship to that deity. This Kumu, caught up in the mist of her belief, imagined that it was her deity who had beckoned her through a proposal of marriage…”   This excessive religiosity is not piety but a sign of mental health issues. That she believes it is divinely ordained that she marry a man she has never met, then finds him repulsive, makes no attempt to communicate with him, and for whatever reason, makes him feel inferior, only makes her more unlikeable. I wonder if Madhusudan ever saw her smile?

“Ever since their mother’s death, Bipradas had become entirely dependent on Kumu’s care. …everything was in Kumu’s charge. He had become so accustomed to this that nothing pleased him in daily use unless it was touched by Kumu’s hand”.  The admiration between brother and sister for each other is mutual. At best it’s protective, at worst, incestuous.

This novel was written more than a hundred years ago and the main impression is of a suffocating caste-ridden Bengali society mired in rituals and mindless superstition. It couldn’t have been very pleasant being a woman.

While it’s not fair to judge a novel written about one hundred years ago by 2021 standards, I did find the characterization unconvincing, especially when coming from the great Rabindranath Tagore.

“For the nineteen years of her girlhood an intense sense of purity had enveloped and pervaded her every limb”. Was Rabindranath Tagore’s Kumudini meant to be a caricature of somebody he knew?