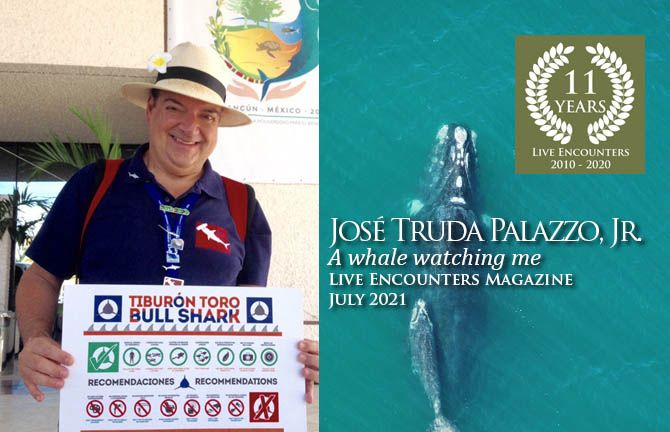 José Truda Palazzo, Jr. is a Brazilian environmentalist, wildlife gardener and writer with a career spanning 43 years and 14 books published as author or co-author. He served for almost two decades in government delegations to international conservation treaties and is a co-founder of many conservation organizations around Brazil and South America, having led successful campaigns for the establishment of several Marine Protected Areas in his home country. José is also a Member of the IUCN (World Conservation Union) Task Force on Marine Mammals and Protected Areas and its Tourism and Protected Areas Specialist Group, a Life Member of the Australian Conservation Foundation, and a Board Member of the Brazilian Humpback Whale Institute. His next book, Living Water: Marine Ecotourism, Communities and Conservation will be published later this year by Australian publishing house Stormbird Press. More about his work and writings at www.josetruda.wordpress.com. 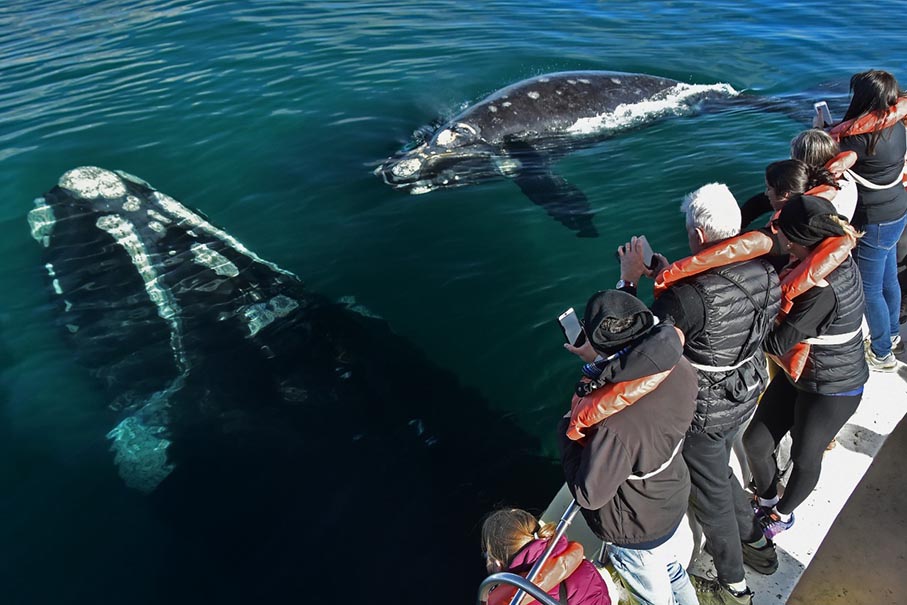 Ecotourism and wildlife encounters are essential tools for reconnecting with nature.

The wind is blowing hard – as it almost always does – across the blue-gray horizon of the Nuevo gulf in the Patagonian shores of Argentina. Yet the water surface of this immense enclosed body of water is rather flat, calmed by the protective high cliffs dotted by marine fossils which encircle it, especially here at the outskirts of Puerto Pirámides, the tiny village where the boats depart from.

I don’t mind the wind, and in fact I barely notice anything else around but the big eye watching me from no more than three or four feet off the boat. It’s a Southern right whale, a mother with its calf, and like 400 others of its kind moving around the gulf at this time of the year it doesn’t mind the whale watching boats at all – in fact this particular one and several others actively seek interactions with the boats, circling around and putting its huge eye near the surface of the water to look at the curious apes floating around in this nutshell, making contented noises at every move by their gigantic ocean hosts.

The boat I’m in is operated by Captain Micky Sosa, son of Argentinian legendary diver Adalberto ‘Peke’ Sosa, and back at their office by the beach Peke’s granddaughter manages the office. This is the longest-running whale watching family business in the world, having been around for five decades. In the time since Peke started taking tourists out to see whales, this still-endangered species has recovered happily in the waters around Puerto Pirámides. They – the whales and the Sosas – are the definitive proof that responsible whale watching does not impact the animals and can provide a long-lasting, sustainable source of income for coastal communities.

Examples such as that of Argentina have popped up all around the world. In Mexico, the friendly gray whales of the Baja California lagoons even allow petting by mesmerized visitors who get out to see them in the small boats of local fishing families turned whale watching operators. But not only whales get to be visited and interact with people. Halfway across the world, in the western Pacific coral lagoon of Yap in the Federated States of Micronesia, Bill Acker and his native family take divers to see majestic manta rays every day of the year in the channels and around coral heads that serve as cleaning stations, with dozens of small fish picking up parasites and dead skin from the mantas as people watch and are watched from close quarters. And off the Filipino town of Oslob and at a remote bay of Cenderawasih National Park in Indonesian Papua, it is whale sharks that delight human visitors; the largest fish in the ocean are attracted by the provision of tiny fish as food by the locals and hang around divers for hours in a row.

There’s absolutely no question that each of these experiences I just described, and which I’ve had the privilege of experiencing first-hand, are life-changing experiences for most. Being in the immediate presence of wild animals in their own environment, exhibiting no fear of the most destructive species on the planet – us – touches the heart of adult people in a way that documentaries and still images cannot. Further, if children are allowed to experience these encounters, it can shape their entire lives, their professional choices, their view of the world, their morals towards biodiversity and our duties as stewards of a living planet. It happened to me ever since my late father took me to Patagonia; it happened to my daughters and is happening to my grandson. Experiencing the beauty and power of Nature first-hand does create better, more responsible human beings. And we need that, urgently, as we again get out in the open in a post-COVID world which begs for our help to continue existing.

One would assume that everyone supports responsible Ecotourism and wildlife interactions like these mentioned above, and which cause no harm at all to the animals. However, out of many human activities in the wild, it seems to me that non-extractive, non-lethal ones are somehow those that attract an inordinate amount of criticism, especially from academia. You just need to google around a bit to find all sorts of papers published in allegedly reputable journals with scary titles and abstracts about the perceived horror of whale watching and the tremendous impact of ecotourism and etc. etc. etc., to the point where you are led to think that looking at fish will degrade their quality of life (no joke – I read an article saying almost that very thing).

I was made so uneasy by so many allegations of ‘harm’ in watching Nature that I decided to dig deeper, and what I found led me to write a book about the subject, coming up later this year. Not only it seems to me that the cost-benefit of Ecotourism activities and well-managed wildlife interactions, be it for conservation or socioeconomic improvements in local communities, fully justifies the activities; but also, many of the ‘scientific’ papers alleging impacts of non-extractive uses do not actually determine real detrimental conservation effects of these uses. There’s a surprising tolerance in accepting opinion and short-term studies as ‘evidence’ for impacts which experience in the real world contradicts. Some scientists warn of ‘serious’ whale watching impacts, yet not a single species or population of large whale targeted by whale watching around the world has suffered as a result of the activity; much to the contrary, all such populations have recovered steadily from the damage wrought by whaling, and most continue to grow after 30, 40 or 50 years of intensive watching. Bill Ackers’ manta rays continue to show up daily for diver interactions as they did in 1986 when visits began. And the whale sharks of Oslob continue to lead happy lives, oblivious to the throngs of snorkelers visiting them during mornings, or the rantings of ivory tower dwellers trying to prove they are being ‘harmed’ by it. (Alas, whale sharks in the Oslob region were killed by the locals before they became a tourist attraction. Talk about weighing cost-benefit of different uses!) Across the Caribbean, feeding sharks in front of divers also has replaced shark fishing and finning, yet ‘concerned scientists’ keep screaming bloody murder against it because… well, because they think it might perhaps maybe quien sabe somehow one day be harmful. Ask the millions of dead sharks every year whether they’d rather be watched or killed.

Still, government bureaucrats around the world whose field experience with wildlife is next to none are rallied by these papers with outlandish ‘impact’ claims, and oftentimes (including when directly and unduly prodded by ‘impact researchers’) embark on drafting and imposing layer upon layer of restrictions to regulate human-wildlife interactions, ‘based on scientific evidence’ extracted from these papers with very little factual grounds, making it ever more difficult for people to approach, interact with, and be changed by wildlife species after harmless encounters.

Two important researchers seem to agree with me in that these abusive restrictions are not only unwarranted, but harmful to conservation when cost-benefit is considered. One is dr. Roger S. Payne, Ph.D., father of modern non-lethal whale research and who, as whale watching was becoming an issue of concern back in 1990s, wrote a working paper for a seminar titled What Will We Lose if We Overprotect Whales, expressing his concern that over-regulation and the adoption of supposedly ‘precautionary’ restrictions on human-whale interactions would hamper the development of widespread empathy for the plight of these animals at the broader scale of human society. I call it the Roger Payne Paradox. Should we sacrifice the many, evident, real-world socioeconomic and environmental benefits of whale watching (or Ecotourism, for that matter) due to perceptions of potential impacts, more often than not anchored not in scientifically proven facts or experience, but in ‘moral’ or ‘ethical’ beliefs of certain groups of people?

The other is Richard Louv, award-winning writer and researcher of children and Nature, who in his best-selling Last Child in the Woods complains strongly about the excess of regulations preventing children from enjoying close experiences with Nature in North American public parks and green spaces. To me there’s no question about it: from climbing trees to watching whales up close, children deserve a childhood full of first-hand experiences with wild places, things, and beings.

Of course, chasing wildlife (or worse, using captive animals for entertainment-only purposes) is wrong. Of course, overcrowding national parks and trampling off trails is wrong. But that’s not what academic zealots are deriding; it’s legitimate wildlife watching activities with no proven harm. It is about time that cost-benefit for conservation and people, and real-world long-term results, are brought back into the equation. Looking at a live whale or shark up close creates Nature defenders, employs local people, generates social legitimacy for conservation. And we need these three things for a post-COVID recovery of the economy, yes, but also for healing minds and souls, and, ultimately, our planet.

Go out, let a whale watch you. By looking into her eye, you might be able to capture the essence of life and maybe, just maybe, a bit of the meaning of it.