Eduardo Goncalves is an award-winning campaigner, conservationist and author who has spent the past 30 years dedicated to fighting on behalf of the environment, defenceless animals, and the homeless. In 2018 he set up the Campaign to Ban Trophy Hunting. In 2019, every UK national political party included a pledge to ban imports of hunting trophies in its election manifesto. The UK government has now pledged to introduce legislation to ban trophy imports. The political sea-change has been large driven by a series of explosive books written by Eduardo which have been extensively reported in the media and which reveal the shocking truth about this cruel ‘sport’s’ toll on animals – including some of the most endangered animals on the planet. For his latest book, Undercover Trophy Hunter, Eduardo posed as a trophy hunter and tracked down dozens of leading figures in the industry and their clients, winning their trust and in the process uncovering some of the darkest and most shocking insights into the industry’s activities. 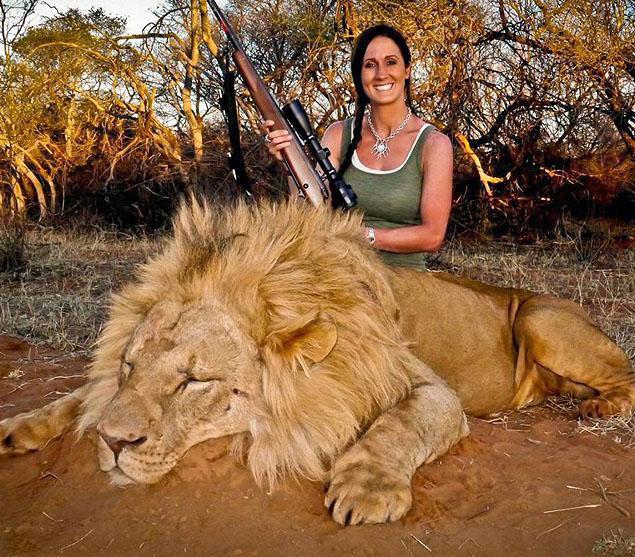 TV presenter and hunter Melissa Bachman posted this photo of herself with a lion she killed in South Africa, tweeting, ‘What a hunt!’ (Melissa Bachman via Facebook) https://www.nydailynews.com/news/national/tv-presenter-slammed-photo-lion-killed-article-1.1519039

“The bullet slammed into the lioness and she spun in the air, falling against the electric fence behind which she was confined. Standing on the other side of the fence were her three young cubs – she had been separated from them an hour earlier. Another shot was fired by the overseas hunter. She slumped to the ground in a crumpled heap. Both times, the hunter shot from a vehicle. He then posed with the dead lioness and pulled at her mouth to show her teeth. Later, in the skinning shed, as the lioness’s coat was removed from her body to become a ‘trophy’ for the hunter, milk from her teats mingled with her blood on the ground.”[i]

In 1997, ten million TV viewers in the UK watched a documentary presented by legendary investigative journalist Roger Cook. It revealed the existence of a horrific new industry: canned lion hunting.

Aired on May 6, ‘Making a Killing’ exposed how lions were being illegally siphoned out of South Africa’s Kruger National Park by hunters and landowners to acquire lions for this shocking new enterprise.

Tracey McDonald, who ran a hunting company with her husband Sandy, was secretly filmed explaining the process: “You just dig a little bit under the fence and you leave a little bit of rotten meat on that side, then you drag it with the blood running and the lion picks the scent up so easily and it just comes through.”

The documentary included shocking secret footage from a game ranch near Komatiport, on the south-east end of the Kruger bordering Mozambique, run by a businessman named Roy Plath. It shows a lioness with three cubs lured with bait placed on the bonnet of a truck and separated from her young. A hunter then shoots her from the truck.

Researchers acquired evidence of a canned lion hunt in which over 12 shots are fired into the animal. The hunter is thought to have avoided a quick kill by shooting the lion in the head because he did not want to ‘ruin’ the look of his trophy. The team discovered people who were breeding white lions for hunters, and of a client’s young son being urged to shoot a lioness. It eventually took 16 shot to kill her.

Another hunting operation claimed to have clients killing over 1,000 animals every year. During the making of the documentary, Cook is offered gorillas to shoot in Cameroon. Fixers tell him they can smuggle the gorilla’s head to the Nigerian border so that ‘Mr Rogers’ can smuggle it back home more easily. He is also offered a tiger in Malaysia by a Spanish middle-man.

When “Making a Killing” was aired in 1997, there were perhaps just a dozen or fewer ‘lion factory farms’ in South Africa. Today, according to government officials, there are over 300. CITES records show that just 10 trophies from canned lions were exported from South Africa in 1997. In 2017, the most recent year for which full figures are available, 582 trophies from lions born and bred in captivity were taken home by foreign hunters – more than fifty times the number taken just 20 years previously.

Richard Peirce is a British wildlife author and documentary-maker. In 2018 he wrote a book called ‘Cuddle Me, Kill Me’ which investigated what the world of canned lion hunting currently looks like. It reveals how lionesses are treated like dogs in puppy mills, and that they are repeatedly forced to breed cubs by having their young taken away shortly after birth so that they go straight back into oestrus.

He tells the harrowing story of a typical canned lion hunt. An American couple, George and Hilary, pick out their preferred lion from photographs provided by the hunt operator before flying out to South Africa. The animal, like so many others, had been reared in captivity and was a tame and easy target. The story begins with the pair entering the lion’s enclosure in a vehicle with two of the hunting camp’s workers.

“The lion was dozing when he picked up the familiar sound of a vehicle’s engine approaching. He had lost the captive pride he had lived with and was alone in strange surroundings. But it was with curiosity rather than alarm that he lifted his head, and looked in the direction of the noise. He saw a vehicle stop a little distance away from where he lay, but didn’t move as people got out of the vehicle and walked around examining the ground. The vehicle then drove off, leaving people behind who continued examining the ground before walking in his direction.

“He was used to humans; they had been in his life every day since his birth. Indeed, his life had started with humans, who had bottle fed him after he had been removed by his mother. Humans were nothing to fear; in his early life they had been a source of comfort as well as food. His instinct was almost to get up and go and greet the people that now walked towards him.”

The hunter lifts his rifle, takes aim, and shoots it.

“A massive muscular contraction and the impact of the bullet lifted the animal into a weird, grotesque backward whirl as George’s second shot hammered into him. The lion now lay on its side panting and bleeding in the grass. With their guns at their shoulders, Pieter, Andrew and George approached in single file. George showed no emotion as, together with Hilary and the hunting team, he walked to the lion, which now lay dying with two bullets in its body.

“The mortally wounded animal lay on its side and was still breathing as it looked at its killers. ‘Finish him off with a shot through the eye, then it won’t show when the head is mounted’, said Pieter automatically as he looked down at the stricken lion.”[ii]

Others recount similar experiences. “The lion cartwheels from the force of the bullet – shocked and confused it roars, turns and quickly limps off into the bush. ‘Shoot him again, shoot him again, shoot him again’, the professional hunter frantically urges, as the hunter reloads, firing into the trees.” The hunt is being filmed by a cameraman hired by the hunter. The video shows the lion lying dead and the American hunter walking up to him. “’Hey you’, he says, ‘I’m sorry, but I wanted you’, before leaning down and kissing the lion.”

Every year, an estimated 6,000 lion cubs are bred in captivity in South Africa in order to satisfy demand from the trophy hunting industry and from the fast-growing lion bone trade. Once the hunter has taken the skull and skin of the animal he has shot – which is transformed into a trophy – the skeleton is turned into ‘wine’ and ‘cake’ and a range of other products with supposed medicinal products an which are popular in parts of South-East Asia.[iii] Some of those involved with the trade are known to be involved in illegal wildlife trafficking. Despite this, and warnings from conservationists about how the trade is fuelling wild lion poaching, South Africa has been granted special dispensation by CITES to continue this terrible trade.

The industry is today a powerful one. When South Africa’s government attempted to regulate the industry, it was taken to court. The government had introduced a bill in 2005 which would have required captive-bred lions to be released into a semi-wild (but still enclosed) area a full 2 years before they could be hunted. The industry sued the Minister of Environmental Affairs. South Africa’s Supreme Court of Appeal overturned the law.

In 2019, officials from the Department of Environmental Affairs visited a number of lion breeding farms. They found that 88 of the 227 facilities inspected did not have proper permits to operate.[iv] In Free State – the province with the most such facilities – over half of the 111 farms were operating illegally.

Instead of taking punitive action, though, inspectors issued them with accreditation papers.

The South African government has now apparently agreed to end the breeding of lions for hunting. But what will happen to the estimated 12,000 captive lions currently awaiting a hunter’s bullet? A government report suggests returning them to the wild and that mass euthanasia may be the only solution. Surely, though, those who have profited from the misery of these great cats should be made to foot the bill of ensuring they can live out their days in dignity?

[iv] “South Africa kicks the can down the road on captive predator breeding”, Ross Harvey, The Conversation 21 March 2019