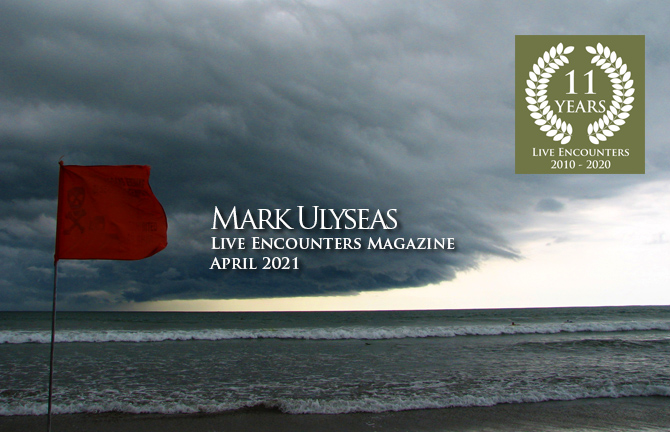 Mark Ulyseas has served time in advertising as copywriter and creative director selling people things they didn’t need, a ghost writer for some years, columnist of a newspaper, a freelance journalist and photographer. In 2009 he created Live Encounters Magazine, in Bali, Indonesia. It is a not for profit (adfree) free online magazine featuring leading academics, writers, poets, activists of all hues etc. from around the world. March 2016 saw the launch of its sister publication Live Encounters Poetry, which was relaunched as Live Encounters Poetry & Writing in March 2017. In February 2019 the third publication was launched, LE Children Poetry & Writing (now renamed Live Encounters Young Poets & Writers). In August 2020 the fourth publication, Live Encounters Books, was launched. He has edited, designed and produced all of Live Encounters’ 210 publications (till April 2021). Mark’s philosophy is that knowledge must be free and shared freely to empower all towards enlightenment. He is the author of three books: RAINY – My friend & Philosopher, Seductive Avatars of Maya – Anthology of Dystopian Lives and In Gethsemane: Transcripts of a Journey.  www.amazon.com/markulyseas 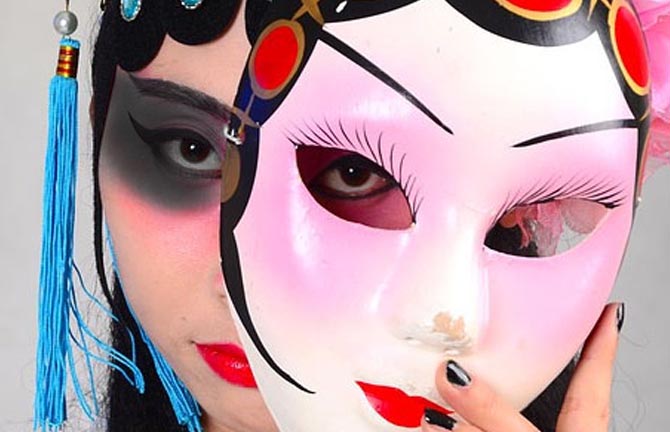 The present trend of China bashing has become a contagion following the unleashing of the virus. Conspiracy theories run riot. Did it originate in China from a laboratory or was it transmitted from animal to human at a wet market? Or was it engineered by the deep state to attain global domination of the masses?

Is this the opportune time to make China pay now that the whole world is affected by the pandemic?

― “The U.S. government does not know exactly where, when, or how the COVID-19 virus—known as SARS-CoV-2—was transmitted initially to humans. We have not determined whether the outbreak began through contact with infected animals or was the result of an accident at a laboratory in Wuhan, China.” https://ge.usembassy.gov/fact-sheet-activity-at-the-wuhan-institute-of-virology/

― “What is not revealed is that the U.S. National Institutes of Health (NIH) had funded the controversial Wuhan Institute of Virology (WIV). U.S. Secretary of State Mike Pompeo has already been on record confirming and defending this funding, saying it was “to protect American people from labs that aren’t up to standard.””
https://thediplomat.com/2020/05/why-would-the-us-have-funded-the-controversial-wuhan-lab/

Despite the pandemic, the US-China business model appears to be thriving. The deafness to political spiel couldn’t be more apparent. Threats by world powers and actions against China have not worked.

The following are a series of news reports that reveal the true nature of realpolitik.

― “China’s exports surged 60.6% over a year earlier in the first two months of 2021, after factories reopened and global demand started to recover from the coronavirus pandemic.”
https://www.usnews.com/news/business/articles/2021-03-07/chinese-exports-surge-as-global-demand-recovers-from-virus March 7, 2021.

China was the United States’ largest supplier of goods in 2020.

China ends 2020 with record trade surplus as pandemic goods soar.
― The bumper year also underscores China’s role as the fulcrum of global supply chains even as
political tensions with the U.S. and other trading rivals simmered.
https://www.bloomberg.com/news/articles/2021-01-14/china-s-trade-surplus-hits-record-as-pandemic-fuels-exports

― “The latest figures, released by Eurostat, showed that China now has an even bigger role in how European economies perform. The Chinese economy is performing slightly closer to pre-Covid levels in comparison with other parts of the world, where restrictions are still taking a toll on activity. The European Union seems willing to strengthen economic ties with China.”
https://www.cnbc.com/2021/02/16/china-overtakes-us-as-europes-main-trade-partner.html

― “Companies may move supply chains out of China, but not necessarily to the U.S. More companies leaving China does not necessarily represent a win for American workers. Many companies that are moving some facilities out of China — including Samsung, Hasbro, Apple, Nintendo and GoPro — are relocating to countries where wages are even lower.” https://www.nytimes.com/2020/07/22/business/companies-may-move-supply-chains-out-of-china-but-not-necessarily-to-the-us.html

“China, the world’s second-largest economy, is expected to see 8.1% growth in 2021 as economic activity continues to normalize and domestic COVID-19 outbreaks remain under control. It is further expected to grow by 5.6% in 2022.” https://www.nasdaq.com/articles/the-fastest-growing-trillion-dollar-economies-in-2021-2021-02-05

“China’s export-led economy has actually benefited from lock downs in western countries. Western demand for services like entertainment and travel may have declined, but demand for household consumer goods and medical supplies has increased. Chinese exports to the US have reached record levels despite the high tariffs imposed by the Trump administration. China could now overtake the US as the world’s largest economy within five years, twice as fast as previously predicted.” https://theconversation.com/world-economy-in-2021-heres-who-will-win-and-who-will-lose-152631

How the USA groomed China from a sweatshop into the world’s manufacturing hub.

― “China was being groomed to become a low cost producer for U.S. multinationals since the time of Republican President Richard Nixon. That got the ball rolling. The idea was not to turn it into a manufacturing hub at the expense of the U.S., but an open China would become a more middle class China and a middle class China would overthrow the Communist Party elite. So the experts believed.”

― “All of this happened during the Cold War. U.S. business owners had to placate labor because labor had an alternative model — Soviet communism. If business owners didn’t work with labor, it added credence to the Soviet model, and that put businesses at risk of labor disputes and potentially even revolts.”

― “Then the Cold War ended, and labor was kicked to the curb. It all went abroad in the late 1980s and 1990s, culminating into a mass exit once China joined the World Trade Organization under Democratic President Bill Clinton.

― “Both parties were pro China because the business industry constituents wanted more certainty regarding U.S. China trade relations. Prior to joining the WTO, China’s favored nation trading status was up to the political whims of the American Congress.”

― “A recent whitepaper prepared for a policy conference, “Policies to Improve the Competitiveness of U.S. Manufacturing”, organized by Indiana University and the Hudson Institute, also notes that an increase imperative of shareholders over labor equated to cost cutting labor in order to maximize shareholder profits.”

― “The Chinese just did what the Japanese did times a million…It’s spider to the fly stuff. Why is everything made there? You have to ask every board and CEO of big industry. They were told ‘come to China and we will give you a 50% devaluation of the currency, plus cheap labor, plus free land, plus no interest rate loans, no safety or environmental regulations that are going to drive up your costs 30%.’”

― “China’s Made in China 2025 plan includes plans to expand in areas such as blockchain technology, artificial intelligence, robotics, semiconductor and chip making technology, along with biotech…” https://www.forbes.com/sites/kenrapoza/2020/04/30/why-is-the-us-is-so-ridiculously-dependent-on-china/?sh=5e346de356b5

The lethal combination of controlled capitalism and communism is helping China expand its financial and military power across the world through fair means or foul. It has learnt many lessons from the USA and other western powers, the primary being the building of a vast industrial base that has resulted in the phenomenal increase in its GDP from US$ 0.3 trillion in 1985 to US$ 14.7 trillion in 2020.

So what do the western powers have to bleed China by a thousand cuts ― Their moral version of civil and human rights and sanctimonious ranting for religious freedom, independence for Tibet, a country that China invaded and occupied, and strenuous objection to the ongoing persecution of the Uyghurs? What has the USA actually done for the Tibetans other than shout from the rooftops?

The persecution of the Uyghurs is only air time in the media and some ineffectual sanctions and for preaching from the democratic pulpit. Other than this, there is little or nothing that can be done short of invading China. And China is not Iraq.

The disheartening aspect of so called western civilisation is the unseemly cracks in its societies that have surfaced with the rise of woke liberalism, reverse discrimination of adverse proportions, cancel culture and the attempts to right historical wrongs in retrospect by the reset button of growing mob mentality. Has the violence for and against Black Lives Matter contaminated the voice of reason?

Crowds in the thousands continue to protest the lock down in many western countries. Inept democratically elected governments are unleashing the police on the civilian crowds. There are instances of police beating, arresting and in some cases setting their dogs on the protestors. The western concept of civilised debate appears to be thrust aside by the rise of democratic fascism. These disturbing images have been viewed by millions of Chinese and ‘promoted’ by Chinese media.

Google, Youtube, Twitter, Facebook and Instagram are officially blocked in China, a country which has created its own versions such as Weibo, Renren, YouKu and WeChat. This helps the Chinese government to keep a strong grip on the media, social and otherwise. Perhaps this is also to do with prevention of data harvesting by the aforesaid western media?

The Human Factor, in relation to the Chinese people, is not about the perceived non-freedoms that are bandied about by western powers but by an elevated standard of living, a certain pride in one’s country. Chinese nationals are proud of their new status for which they have worked hard to achieve. Perhaps the western powers see China as a push over nouveau riche rural society that does not possess the finer aspects of modern civilisation. The colonial hangover is apparent here.

My conversations with Chinese travellers and business folk can be summed as: When people are faced with hunger they will choose food over faith. And when they are poor they will choose money over freedom of speech. And when they have money, they have freedom, freedom to travel and buy whatever they fancy. And send their children abroad for higher education (Chinese spend billions of dollars every year to study in western universities). They are of an ancient culture. They consider themselves to be hard-working and patient people.

In the present state of affairs, the people of a country are deliberately lumped with their government. Hence, the omissions and commissions of the government are attributed to not only the said government but the ordinary citizens struggling to live a life of dignity. And this is why ordinary Chinese people have become the target of international abuse.

As long as it’s international trade without the spice of military confrontation realpolitik will hold. But there are too many ifs and buts. The hawks on either side would rather see a military victory to achieve a revised business arrangement than a negotiated peace. Perhaps the history of The East India Company is an unpleasant reminder.

The only way to deal with this new power is to engage with it through people to people contact, back room negotiations, and more importantly to isolate the gung-ho wallahs on all sides.

Keeping face is a defining cultural aspect of many Asian countries, China no less. Therefore, public verbal confrontation of any manner only exacerbates the situation and should be kept at the minimum decibel level.

― “The Chinese economy is undergoing a certain amount of change because China is focussed a lot on domestic demand… That way, it will need iron and steel for its infrastructure needs. Whenever infrastructure projects have been prioritised in China, India’s exports of iron and steel to that country have gone up,” Prof Biswajit Dhar of the Centre for Economic Studies and Planning at Jawaharlal Nehru University said. https://indianexpress.com/article/explained/explained-in-a-tense-year-china-trade-stayed-robust-7206718/

Realpolitik is the mantra

Military encounters, innocent people killed on the border, nationalist fervour with the ban of Chinese apps in India and the breathless reportage are but sideshows. The main draw is trade between the two countries. India and China, despite the numerous disagreements, cannot afford to disengage from trading with one another.

China has matured from a rural society into a juggernaut of sheer wealth, military might and burgeoning space power. The commercial, political and military ties with Russia is growing rapidly. We must be grateful to the USA for this. There is no going back, now.

A new world order is in place and it cannot be business as usual anymore.

In the words of Chinese philosopher and military strategist Sun Tzu (544–496 BC),

“The supreme art of war is to subdue the enemy without fighting.”