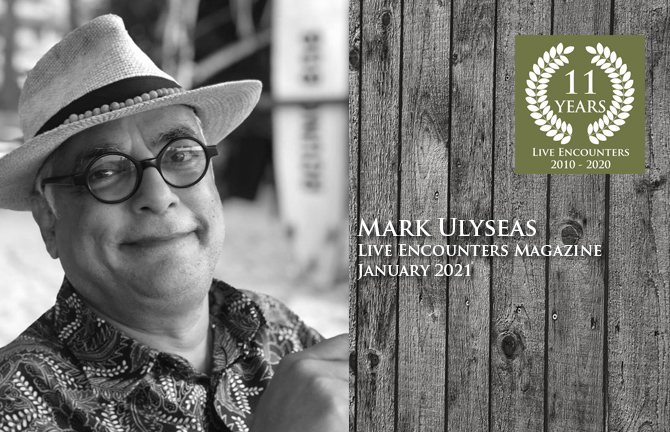 Mark Ulyseas has served time in advertising as copywriter and creative director selling people things they didn’t need, a ghost writer for some years, columnist of a newspaper, a freelance journalist and photographer. In 2009 he created Live Encounters Magazine, in Bali, Indonesia. It is a not for profit (adfree) free online magazine featuring leading academics, writers, poets, activists of all hues etc. from around the world. March 2016 saw the launch of its sister publication Live Encounters Poetry, which was relaunched as Live Encounters Poetry & Writing in March 2017. In February 2019 the third publication was launched, LE Children Poetry & Writing (now renamed Live Encounters Young Poets & Writers). In August 2020 the fourth publication, Live Encounters Books, was launched. He has edited, designed and produced all of Live Encounters’ 203 publications (till January 2021). Mark’s philosophy is that knowledge must be free and shared freely to empower all towards enlightenment. He is the author of three books: RAINY – My friend & Philosopher, Seductive Avatars of Maya – Anthology of Dystopian Lives and In Gethsemane: Transcripts of a Journey.  www.amazon.com/markulyseas

Each year that passes is unnatural, unnatural in Time. For all these days, months and years have been created by us. We have yet to understand Universal Time. We live by this unnatural Time and write our histories by it… histories that defy the truth because many among us write history to appease our own and not necessarily a truthful rendition of past events. One supposes that Napoleon Bonaparte was right when he said, ‘History is a set of lies that people have agreed upon’. Generations upon generations have been and continue to be fed lies. These lies infect all who believe them thus creating schisms between countries and peoples.

Schisms within a religion and between religions have been crafted to ‘manage the masses of illiterates’. These illiterates are preyed upon by self appointed gendarmes of faith who put the fear of God and everlasting damnation into the hearts of the faithful. Furthermore, for their own narrow vested interests, they deliberately create schisms so as to perpetuate a fraud on the unsuspecting masses – us and them has become the mantra fuelled by hate. And while the blade rises and falls on the expendables (faithful slaughtered by other faithful) people watch dispassionately as newsreaders belt out the deadly digits of senseless killings, day in and day out. The litany of bloodlust appears to be flowing unabated. Life is now disposable, particularly those of others. It would appear that a sense of exceptionalism has engulfed our senses. Our dead are better than their dead. Our country is greater than their country. Our religion is the only true religion. Where have we gone wrong?

A long time ago I had the opportunity to discuss these issues with a wandering Sufi, who summed up this distortion of humanity in one sentence – ‘We have lost our insanyat (humanity)’ we lost it a long time ago and now, as the Hindus say, we live in Kali Yuga – the end times.”

So who decides these end times? When was it decided and if it was written in the scriptures of a religion/s – who wrote these scriptures? And why should we believe what has been written? Could it be that these scriptures too had been written by people with vested interests to promote one religion or another? How can they prove that it came from God? And does God exist? Who can prove this? Who can disapprove this?

According to Swami, a Shiva Bhakt, indeed we have lost our insanyat. People have become more self centred, the me-me factor has become synonymous with the Self. Social media has brought us closer and yet alienated us all by deleting the human touch and in its place introduced the touch pad, ipad et al on one side, while on the other side it has further divided the haves from the great unwashed millions who live off the refuse of the privileged.

A Catholic priest once told me – “One day at a time sweet Jesus – go out and share, love and forgive. Then return home. And the next day do it again. And again. And again. And you will discover after sometime that people will reciprocate in the same manner. This is how you can make the world a little bit better. Your actions should be your words.”

In this day and age to follow his advice is scary and this is where, I suppose, the strength and depth of one’s faith is truly tested. For what is the purpose of one’s faith if not to serve those in distress – the hungry, homeless and the weak, and without harming others?

In my travels I have met people from many faiths who were kind and generous without a hint of ill will towards those who were not of their faith. Their religious charities help all with food, shelter and education without bias towards religion, caste or gender. It is these people who have not lost their insanyat. It is through their humanity that their faith speaks. And this is comforting to know that there are people of faith out there who are not aroused by rabid religious preachers nor moved by the machinations of those seeking to create schisms in a faith or between faiths.

I shall leave you now with this quote from Thomas Aquinas –