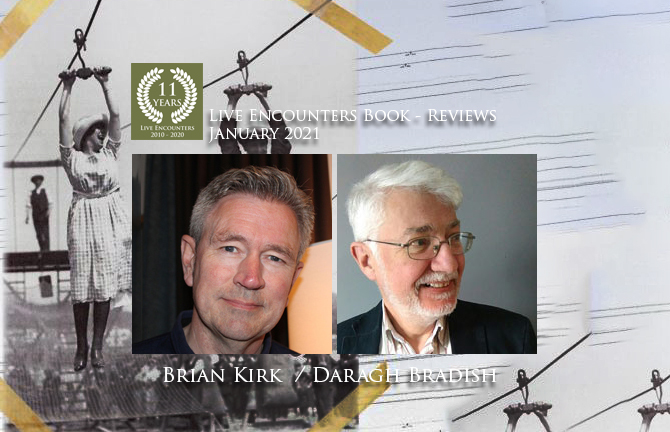 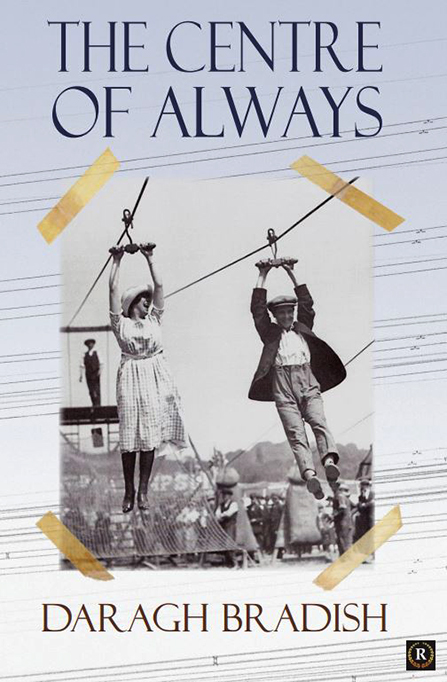 The first thing to take note of here is the striking cover image, a black and white photograph of a man and woman snapped by the camera half-way along a zip wire. In the background crowds look on, but what is of real interest is the faces of the pair, the absolute joy and abandon they express and embody as they fly through the air.

In the first poem Towards Morning Light the poet addresses uncertainties and prods at possibility: ‘Answer the question, / or begin to write it down’, the poem begins. There is that sense of taking the plunge, of stepping off from solid ground into the unknown. In Sometimes The Earth we have that feeling of uncertainty again, the juxtaposition of the childish and adult perception of the world:

‘Sometimes the earth trembles and we do not
feel it, but our mothers do
and order us outside while we linger,
waiting in night slippers.’

The idea of the moment trapped in time persists as we read on. In Afterimage / Oblivious Of The Birds the poet captures the ekphrastic moment when the photographer snaps a group outing at the Cliffs of Moher in 1910:

‘The snap man called the shot.
One shutter slap
generations after seeing…’

Photography has the power to preserve moments in time allowing the viewer to work back and forwards from that moment to rebuild a fuller picture of the life. Here poetry helps us to do this in a more comprehensive way than the static nature of the visual image can. Poetry is both in and outside of time and for this reason we are not simply limited to a snapshot, but we are actually taken back to there and then.

The three-line stanzas of Wild Atlantic Ways give us haiku-esque glimpses of a touring group along the west coast of Ireland. Taken together they create a narrative poem of of subtle humour and striking imagery: ‘You need to bolt your / cap on cousin / for it might soar’.

Throughout the collection the poet engages with poets and writers from the past, but this does nothing to undermine the contemporary relevance of the poems. Time may divide us from them, but it also connects us (if we might paraphrase Simone Weil’s idea of Metaxu).

The sequence on Pasternak is very effective and affecting. It begins with a poem (Pasternak At Kobulety) based on an account of another poet, Simon Chikovani, who lived in the room above Pasternak while he wrote his poem Waves. As in Wild Atlantic Ways we are reminded of the connectedness of things. In the poem Witness, Bradish brilliantly captures Pasternak at work, seated at his desk by the window, the blank page before him waiting to accept his words. The effect of looking through many windows actual and metaphorical is neatly evoked as the poet’s eyes stray from the natural world outside to the world of the imagination.

In the second half of the collection Mary Shelley becomes the focus for a sequence of poems, some of which are told in her voice and deal in different ways with death and life and the idea of reanimation of dead matter. Five of these poems are nine-line formal pieces which rhyme in an outward fashion from the non-rhyming central fifth line. These poems are very well controlled and powerful, and the demands of the form give a further weight to this dark material. In Her Other Dream the poet writes of Shelley’s dream of her dead child coming back to life:

‘She hears a cry, the infant lip
no longer purple, her tiny hands grown warm,
a moment’s miracle, a Bethlehem.’

In Large As Life the monster makes an appearance. He is ‘what nature never dreamt of or begat.’

It seems to me that the pivotal poem in the collection is Surviving Mary Shelley. This short twelve-line poem, which appears almost at the half-way point, somehow manages to embody all of the ideas examined in the collection. There is an Nietzschean striving for all that is good and positive in life in the poem:

‘It is the forward leap that sows.
Belief in landing is the second thing
and not the first that captures
man’s prime need for reckless joy.’

Ah, reckless joy. We’re back with the couple on the cover on the zipwire.

In a later poem Camp Joffre Detention Centre the idea of reinvigorating the dead is revisited. What starts as a grim description of the abandoned camp and its history of inhumanity ends somehow with a cry for renewal: ‘We must await the countless to arise, / exhale and stumble to Jerusalem.’

‘Take breath. Sometimes
to stand beneath the mountain
is enough’.

Prospero’s magic is invoked in We Are Such Stuff, dispelling any sense of the fear of time’s passage. The closing poem The Point of Possible manages to pull together many of the important strands of life, death, love, ageing and passing time that have been considered in the collection in a controlled and compelling way.

This poem, like the collection as a whole, is generous, precise and controlled. There is wisdom in the gracious acceptance of the human condition and the power of love to persevere, knowing that:

‘Once known, the pleasures of a given day,
stay waiting like a scented glove’.

I recommend this thoughtful collection to all discerning poetry lovers.

Daragh Bradish’s poetry has appeared in literary journals such as the Moth, Cránnog, Poetry Salzburg Review, the French Literary Review, Acumen, Orbis, the North, and Irish Times. His first collection ‘Easter in March’ was published by Liberties Press in 2016 and was reviewed in Poetry Salzburg and the Galway Review among other journals. In 2018 his poem ‘Disclosure’ won the Poetry Ireland Trócaire prize, published poet category. From 2010 he coordinated the ‘Sounding for Simon’ readings in Dublin.  His second collection ‘The Centre of Always’ was published in December 2020.  To mark the occasion Daragh made a short video which can be viewed on you tube.

Brian Kirk is a poet and writer from Dublin. His first poetry collection After The Fall was published by Salmon Poetry in 2017. His poem “Birthday” won the Listowel Writers’ Week Irish Poem of the Year at the An Post Irish Book Awards 2018. He was awarded a bursary from the Arts Council of Ireland in 2020 to write and film a sequence of formal poems on the Covid 19 pandemic. His short fiction chapbook It’s Not Me, It’s You won the Southword Fiction Chapbook competition and was published in 2019 by Southword Editions. He blogs at www.briankirkwriter.com.