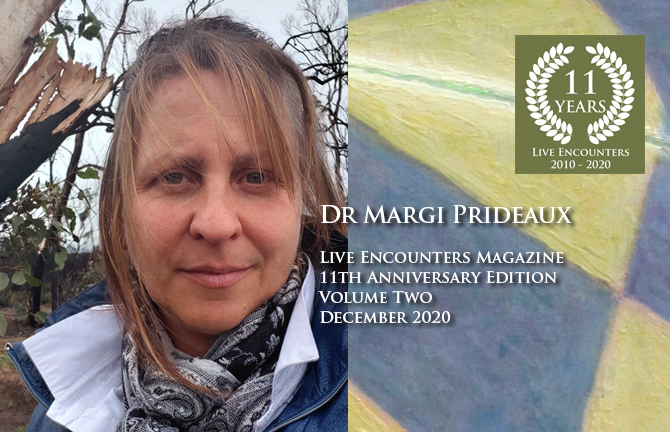 Margi has written about wildlife, international politics and law almost every day for the past 30 years as an international negotiator and independent academic. She has three books, numerous articles, and essays in circulation. Having lived and lost in Australia’s 2019/20 Black Summer fires, she now writes because she believes time has run out. We must compress our attention, abandon our old divisions of hate and difference, and embrace the protection of the wildlife closest to us—to become radically local. Margi’s book, FIRE: A Message from the Edge of Climate Catastrophe will be released by Stormbird Press in January 2021.www.wildpolitics.co Twitter @WildPolitics

There is an unspoken truth—pain makes people change. I know this truth because the pain of this year has eviscerated my previously unshakable beliefs. For thirty years my raison d’être has been as a voice for nature in human affairs. I believed in progressive, incremental change. In protected areas and big laws. I believed in hope.
Now, I know it is too late.
Now, I am prepared to speak unspoken truths.

Steve Biko, the brave anti-apartheid activist, once said ‘A community is easily divided when their perception of the same thing is different.’ There is wisdom in this statement. Division surrounds us. It has seeped into the DNA of our societies. It shapes our views and our dreams. The uber-rich elite separate us into camps, fuelling our divisions in their quest for resource and power, investing millions of dollars in convincing the public and politicians to make the same catastrophic mistakes we have been making for decades. And the conservation sector feeds that division by casting us in tribes—those for and those against nature, persisting with the myth that we must lock away tracts of land for nature, because only that will save nature from climate change. They demonise those who grow and harvest food, while speaking from the privileged access to city supermarkets with ladened shelves of packaged goods. The elite agenda tolls in counterpoint to the conservation sector’s mantra of ‘parks and distrust’; they are the drumbeat at nature’s wake.

These divisions ripple through governments, propping up the very systems that are driving the dual climate and extinction crises.

This year I have stood in the echo chamber of this division. And I am done.

After two weeks of relentless firefighting, the island’s biggest fire—Ravine—escalated into an unnatural inferno that simultaneously reached the island’s north and south coasts. Firefighters and earth movers had risked their lives to build breaks to halt the fire front. Three days later, on January 3, 2020, it broke through their containments, formed a pyro-cumulonimbus cloud that sent a fast-moving firestorm of lethal, super-heated air and flame north-eastward. This previously rare phenomenon incinerated farms, animals, and infrastructure, setting alight decades-old plantations like candles, and overrunning vast ecosystems and the wildlife those precious systems contained. Ravine became so hot and so uncontrollable it literally devoured the landscape. Fire trucks shielded by halos of water witnessed lethal lighting inside the cloud. A weather station positioned centrally between the island’s north and south coast registered temperatures of 428°C with 140km winds before it stopped transmitting—the fire itself was still kilometres away. Aluminium that melts at 660°C pooled across shed floors. Firefighters took refuge where they could or fled from the front. Day turned to deep night, hours before the sun had set. Animals—sheep, cattle, kangaroos, wallabies, koalas—ran in panicked mobs and perished together in tortured heaps. Even big, fast-flying birds succumbed to the fire, sometimes in mid-flight. Stunned and confused, wildlife had nowhere to hide.

Ravine burned eastward for another two harrowing weeks, taking more homes, farms, and wildlife in its path. When finally declared contained—but still active—it had burnt over 2115 square kilometres of agricultural land, plantations, and wilderness—and area nearly twice the size of London. Eighty-nine homes reduced to ash and 332 farm buildings destroyed, many with tools and equipment collected over farming generations. Almost 60,000 farm animals and 830 beehives were destroyed. Our island suffered 75 percent of the nation’s farm animal losses. We will never know the exact number, but millions of wild animals perished on Kangaroo Island from the three billion wild animals that perished across the entire country during the Black Summer fires. 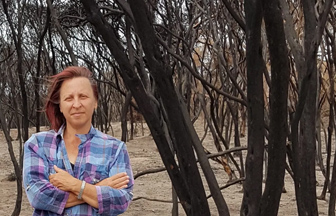 Dr Margi Prideaux on her land

Among these losses was our home, our farm, and our wildlife sanctuary—for my husband Geoff and I this was our everything.

Fire is part of our lives in this landscape, but never had Kangaroo Island experienced this phenomenon. Never had Kangaroo Island been so dry and the relative humidity so low, so early in the season. This fire, and the devastation it caused, drew its genesis from changing climate. How had this happened here? I could not cope with the implications of this knowledge the day after the firestorm. I had slipped into a painful parallel reality, one that would confront me for months as I looked upon the reflections it revealed.

From this parallel place I watched politics investing in more fossil fuel plans while proclaiming our lived experience wasn’t climate chaos. At the same time the conservation industry reaped a windfall in fundraising about the massive loss that surrounding our farms—foolishly forgetting that people are part of nature—collecting millions of dollars to support wildlife rescue and feeding stations, while farmers on Kangaroo Island bent their backs to destroying their suffering farm animals without a whiff of support. Shunning the same men and women who had faced weeks of unrelenting firefighting. Never have I felt so disconnected from my peers.

Never has it been so clear how disconnected the conservation industry can be to people. Never have I felt that politics served another master as deeply as I do now. And division is dangerous.

They warned us this disaster was coming. Scientists have been telling for us decades a changing global climate is affecting Australia’s fire weather by modifying the underlying climate drivers. Thirteen days after Geoff and I lost our world, academic Anthony Burke wrote that Australia’s failure to prepare for the Black Summer’s fires was because society has failed to value that humans are enmeshed in natural ecosystems. We reinforce our folly by allowing our system of government to be vandalised for the benefit of the powerful at the expense of the rest.

As a landholder stripped bare by the Black Summer fires, I have moved, psychologically and physically, into the camp of people who are now living inside the grip of climate chaos. Climate change is not a theoretical or distant horizon. It is real; it is now, and it bites hard. I know, and my community knows, it threatens the future of humanity, and the vast tapestry of biodiversity on which we depend.

And in this climate-changed bardo there are unspoken truths we must confront. We’ve just witnessed the might of fire to destroy decades of conservation in a single night, despite the razor wire in our minds we believed would protect it. One study has found that 3 billion wild animals—143 million mammals, 2.46 billion reptiles, 180 million birds, 51 million frogs—were killed or displaced in the Black Summer fires. Alongside these were 125,000 sheep and cattle. Nowhere was the livestock tragedy deeper than on Kangaroo Island. The full impact on Kangaroo Island’s biodiversity will not be understood for years to come, as extinction debts are slowly, painfully realised. Sure, trees will regrow. ‘Nature will rebound’ people are fond of saying, but we know these fires burned hotter, deeper, and were far more extreme than this landscape is adapted too. 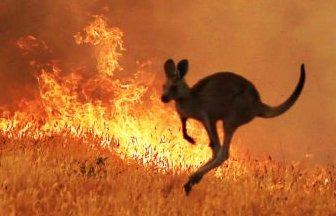 And, who was it that stood in the face of the firestorms? Farmers and landholders fought harder than anyone to save nature along with their farms. These are the same individuals that have been hampered for decades by a scientific bureaucracy that ‘counts’ rather than ‘feels’, ‘prescribes’ rather than ‘supports’, and have designed themselves into an impenetrable mess arguably designed to exclude landholders from managing the risk of fire to biodiversity on their own land—trees, and animals, and insects they cherish. Our balled-up, metric-driven interpretation of laws, suppressed cool, controlled fires that might have saved a significant portion of those species and habitats. Landholders were disempowered and bureaucracies invested because we don’t trust.

It’s too late for another round of argument and obfuscation. I now know my small community, and the nature we love, must adapt on our own to survive. We are connected to this landscape; we understand we are a part of its ecosystems. A few short years ago I wrote that the empowerment of communities, who depend on healthy ecosystems for their lives and livelihoods, makes them effective stewards. I tuned those words to the ecological justice of communities in developing regions of the world, but they now ring true for my community too. We must banish the division and come together—all of us—conservation, farming, fishing, and forestry to work out how to carry on. We need to learn to hear and understand each other because we want the same thing. We want this landscape—one we all love deeply—to endure against the odds.

This ethic means truly acknowledging a community connection to a place and the wildlife we live with—recognising these forests, grassy plains, and wetlands are our home—can build powerful local conservation bonds. Our biodiversity is the most important element in our lives. It’s the life force that sustains us, the food that feeds us, and the context that enlivens our souls. We cannot survive without it.

Conservation form should be born of the community—our homes, our solutions, our management. Communities should have the power to speak for the wildlife that surrounds us in national and international environmental governance. We should be free to adapt, change, and evolve. We should have the liberty to choose if we want to pursue voluntary area closures, or to consider if new activities should start.  The solutions we form should be born of our context.

This proposal requires a leap of faith and commitment from the conservation industry and government actors. We must genuinely devolve decision-making to communities and to adapt the national and international political system to embrace a multitude of conservation expressions–a tapestry of conservation diversity.

Perhaps the most damning unspoken truth—the core of the greatest collective denial—is we have run out of time. Climate chaos is already with us and it will get worse from now on. Our community cannot afford the opinions of people in a city far away dividing us—no community can. We cannot survive the scientific bureaucracy that listens to a disconnected, distrustful conservation elite instead of us. We cannot persist if we are beholden to the budget cuts and sleight of hand as the priority of Federal and State Governments shift with the wind. We must control our own destiny and the destiny of the millions of souls we share this landscape with—the carpenter bees, the pygmy possums, the kangaroos, and the stringybarks. These are our neighbours and our kin. 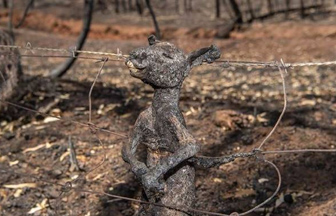 We have no choice left but to do what was obvious all along—to empower radically local conservation, immediately—not incrementally, aiming for ten- or twenty-years’ time. We need local roundtables of planning and decision, populated by those who carry the knowledge of our land, and of fire, flood, and drought—First Nations, farmers, fishers, and conservation landholders—with science there to educate and empower. We should seek agreement and understand compromise. We should banish division.

This year, across Australia, a vast network of the natural heritage estate became ash in the wind.

This year I’ve stood on the very cliff edge of my beliefs, tempted to jump for the shame.
Pain changed me.
Three billion souls perished on our watch. I am done.
Done with the plans. Done with the talk. I am now radically local.