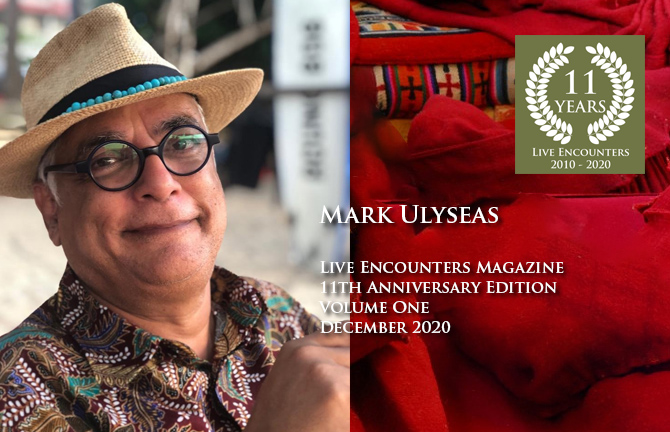 Mark Ulyseas has served time in advertising as copywriter and creative director selling people things they didn’t need, a ghost writer for some years, columnist of a newspaper, a freelance journalist and photo-grapher. In 2009 he created Live Encounters Magazine, in Bali, Indonesia. It is a not for profit (adfree) free online magazine featuring leading academics, writers, poets, activists of all hues etc. from around the world. March 2016 saw the launch of its sister publication Live Encounters Poetry, which was relaunched as Live Encounters Poetry & Writing in March 2017. In February 2019 the third publication was launched, LE Children Poetry & Writing (now renamed Live Encounters Young Poets & Writers). In August 2020 the fourth publication, Live Encounters Books, was launched. He has edited, designed and produced all of Live Encounters’ 200 publications (till December 2020). Mark’s philosophy is that knowledge must be free and shared freely to empower all towards enlightenment. He is the author of three books: RAINY – My friend & Philosopher, Seductive Avatars of Maya – Anthology of Dystopian Lives and In Gethsemane: Transcripts of a Journey.  www.amazon.com/markulyseas

This essay was written and published in 2008. Since then I have updated it every year. Except for a few lines here and there the basic essay has remained in its original form. It is a reminder to us that the inhumanity of humanity has not changed. In fact it appears to be growing in intensity.

Cultural genocide… like the deconstruction of indigenous cultures for homogenisation by a godless State?

Beheadings of teachers for expressing freedom of speech?

More insidious revelations that expose the all-pervasive criminality of governments, international politics and sections of the Media?

Is the UN still a coffee shop for the rich and powerful to hang out and where honour exists among thieves?

And are the medusa-like social media barons new lords of the manor? Do they control our hearts and minds and our freedom of speech? And is this the age of artificial intelligence?

And is woke liberalism the bastard offspring of fascism?

And has exceptionalism become a fundamental right?

There is so much to choose from. It’s like a supermarket out there with all kinds of man-made disasters available on the shelves, one has simply to reach out and grab one. 2020 is ending on a note of negotiated delusions with the Climate Change Conference. What happened to the good old days when we used a blanket instead of a heater? All this talk of saving the world is pointless. Everything is done half-heartedly. Let’s make a resolution for the New Year to decimate the planet. Destroy all our natural resources, pollute the rivers and farm the seas to extinction. At least we would be doing one thing properly.

For instance, let’s take a quick look at Afghanistan. The British couldn’t control the tribes in the 19th century, the Russians failed miserably and the Americans with their assorted comrades in arms, poor souls, are being killed along with thousands of faceless unarmed Afghan civilians. I suppose life is cheaper by the dozen. Hasn’t anyone got a clue as to what the Afghans want?

What about certain parts of the Middle East, areas that have become mass open air abattoirs for the mindless slaughter of innocent people? Do you think they will run out of people considering the number of killings that are taking place? Education there is history – like the death of a six year old killed by a bullet deliberately fired at close range. It stems from the barrel of a gun. The pen is for signing death certificates.

Statistics are essential in war zones. They can always be rearranged to suit one’s perceived objectives. The little numbers represent people; mothers, fathers, sisters, brothers, relatives and friends. A neat way to manage these numbers is to write in pencil so that an eraser can be used judiciously. And as the death toll in war ravaged countries rises, a hysterical caucus threatens a host of other countries for deviating from the ‘acceptable norms of international behaviour’ like illegally invading countries on trumped up charges and bombing innocent folk back to the stone age…like former colonial masters in their dying throes.

And are these the same countries that accuse China of ruthlessly dismantling the vibrant ancient Uighur culture, brainwashing and incarcerating the Uighurs in re-education camps whilst the Islamic countries appear deaf, blind and dumb to the slaughter of their fellow brethren?

And is Tibet now lost forever in the dragon’s jaws?

This dragon has unleashed a terrible virus (a natural phenomenon?) on the world, killing hundreds of thousands, shutting down tourism and all but destroying economies. Meanwhile it has quickly recovered from the scourge and is now selling merchandise in the millions across the world. Is this the soul of Profit & Loss?

Africa, the Dark Continent, what can one say about its peoples and their ancient civilizations that have slowly been corrupted by large corporations and foreign governments meddling in the affairs of the states: Buying and selling governments on mammoth proportions? Oh for the days of the Rwandan blood bath. Everything is quiet now, no excitement and drama except for bloody popular uprisings, theft of natural resources and other inconsequential happenings like the sudden spread of highly infectious diseases and mass kidnapping of school children for forced marriage and conversion…and the continuing practice of female genital mutilation, which appears to be a thriving business across the world where doting parents in western countries take their little girls on ‘vacation’ cuts while their governments lecture Africans on the scourge of female genital mutilation.

What about the sub-continent, India? Do they still abort female foetuses or do they bury them alive, now? Burn women who don’t bring enough dowry? Is rape intrinsic to the male mindset? Do they continue to decimate wildlife? Persevere in the destruction of the environment? And do millions still exist on the threshold of life and death? And is the arrogant Indian Middle Class growing to newer levels self-indulgence?

And is protection of the holy cow more important than feeding hundreds of millions of people living below the poverty line? And are politicians continuing to feed off the socio-economic-religious insecurities of its people? And are sections of its media turning into manic performing artists, deliberately taking sides in political dramas and creating news for ratings?

Forgive me… I missed that little country to the west of India, the homeland of terrorists and an illicit nuclear arsenal – Pakistan, an army that has a country. Poor chaps they’ve had such a tiresome year with the constant ebb and flow of political violence and religious fundamentalism peppered with suicide bombers that probably the common folk want to migrate to the West… can’t really blame them. Their new government is its armed forces’ ventriloquist doll. The common folks’ only desire is to live in peace to pray, work and procreate. Meanwhile their government has switched debtors from the West to China that in turn commercially colonised this country bleeding it by a thousand loans.

Let’s leave all this violence for some tuna, shark fin, whale, and dolphin meat. The Japanese and an assortment of other ‘civilised’ countries, Norway in particular, are so considerate to the world at large. For countries that pride themselves on rejecting nuclear weapons they have a rather odd way of showing their respect for the environment. I am referring to the mass killing of whales, dolphins and other sea creatures on an industrial scale. Actually you must admire their concern. Ever considered the fact that they maybe ridding the oceans of monsters that take up so much space and are a serious health hazard to humanity? However, will the planned dumping of radioactive waste into the ocean by Japan be its main contribution to preserving the environment in 2020?

I think Japan’s neighbour China has the right approach. It has dispensed with the cumbersome concept of human rights and its implementation. In its place totalitarianism with a large dose of plutocracy has been suitably installed. It uses its neighbour, a mini nuclear state, as a stick to threaten countries in the region.

There are many countries that lecture China on its human rights. Wonder who has a perfect track record…The world’s last self-proclaimed superpower? A super power that continues to interfere in the affairs of other nations by supplying state of the art weapons that are often used against civilians living a hand to mouth existence? I suppose the term ‘collateral damage’ is more palatable than the word… murder. There is a killing to be made on the sale of armaments but little or no desire to urgently help its own people devastated by natural disasters like massive fires and super storms and joblessness and crumbling infrastructure.

Civil liberties are essential for the survival of a nation and so is the health of its people. In some areas of society where common sense has been the victim, Nature has found a way of retaliating with diseases like Ebola, AIDS, Swine Flu and Zika, infecting millions and helping to keep the population in check: Of course, with a little assistance from humankind’s scientific community who often test drugs on unsuspecting illiterate folk, in the holy name of finding new cures, while making a profit.

But Nature has a conscience. It has distanced itself from the prevailing pestilence, COVID-19… a deadly virus that originated from the den of the dragon…a Biblical-like plague not from God, but from the godless.

As 2020 downs its shutters the price of a human body has gone up. Human trafficking, organ trafficking and harvesting around the world, including in the civilised nations, is now second only to drug peddling in revenue. Profiteers forecast a higher income in 2021, thanks to continuing war, growing poverty and disease.

And once again, as we have done in the past, this Christmas and New Year we shall all sit down to sumptuous meals, drink whatever fancies our taste buds, shop till we drop and pamper our overweight children and pets. It’s the season of happiness, love and family especially for the homeless, injured and maimed children of wars, missing people in Afghanistan, Syria, Xinjiang (Uighur), Tibet, Yemen, Hong Kong and elsewhere, asylum seekers, political detainees and the fringe folk of the planet. They will surely be very happy and content with what they see, hear, feel and touch this festive season.

From genocide to environmental disasters to a devastating infectious virus it has been a roller coaster ride through many countries and peoples and cultures and religions. This journey will end only when we truly comprehend the reason as to why we have been put on this planet by a power far greater than we can ever imagine.