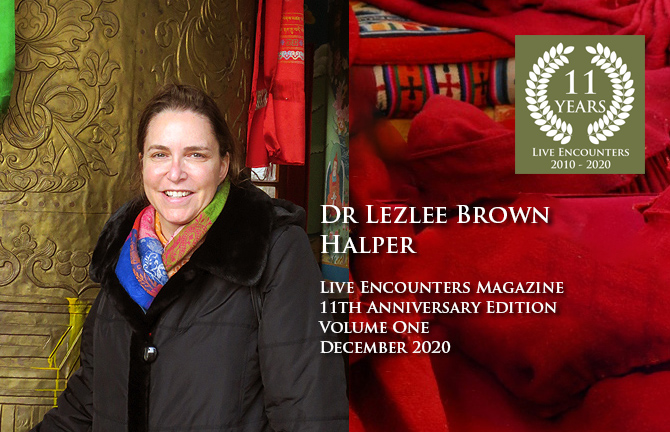 Dr Lezlee Brown Halper, M.Phil (cantab.), PhD (cantab.) is a Tibet scholar who has extensively travelled in and written about South Asia. She is the co-author of Tibet: An Unfinished Story

Education is an essential tool in the nation building process. In China, as in other countries, the education system is a vital part of a wider socialization process which reconfirms cultural norms and supports party loyalty. Beijing has promoted cultural homogeneity not only through educational curricula but also through the determined use of the Han language.

Under the guise of “modernizing” its minority groups, the Chinese began this process with Tibetan school children in Lhasa decades ago. But it was not easily accomplished as Beijing first discovered when People’s Liberation Army (PLA) invaded Tibet in 1950. The problems began with the Tibetan language which did not possess the words needed to adequately convey the political ideology espoused by the PLA.  The Communists had to invent new linguistic categories.

In 2002 in the course of my research, I attended a class in a Tibetan primary school in Lhasa. Students were not learning Tibetan but rather Chinese, the language that would enable them to go on to higher learning and better employment. Parents worried that children would lose their native language. Today, the curriculum for school age children is taught entirely in Chinese, forcing Tibetan parents who choose to have their children learn in the Tibetan language to pay higher fees.

Throughout the past six decades the Chinese have sought to deconstruct the Tibetan culture not only by diminishing the Tibetan language, but by constraining religion as well. After suppressing the 2008 Tibetan uprising, the Chinese continued to persecute Tibetan monks, destroying monasteries or turning them into tourist attractions for those permitted to travel to the region; even possessing a photo of the Dalai Lama today is considered a crime that carries a prison sentence.

In June of this year, a new campaign of “behavioral reform” was initiated which mandates the destruction of prayer flags, a centuries old symbol of the Tibetan culture and spirituality. In extending the crackdown on Tibetans, President Xi Jin Ping announced at the seventh Tibet Work Forum in August, his plans to strengthen party unity in Tibet by “building a fortress to ward off splittism.” This latest bid for absolute control over Tibet prioritizes an intense educational campaign to “combat separatist activities” including “patriotic” reeducation of the younger generation of Tibetans. “Ideological and political” education in all schools has become mandatory.

For decades, the Communist Party of China (CCP) has attempted, largely without effect, to teach Tibetans a revisionist history to bring them into the “Motherland.” Yet, as Beijing has tightened its grip, Tibetans have become increasingly desperate: There have been more than 150 self- immolations since 2009. There is a heavy police presence in Lhasa underscoring the troubled authoritarian civic culture. 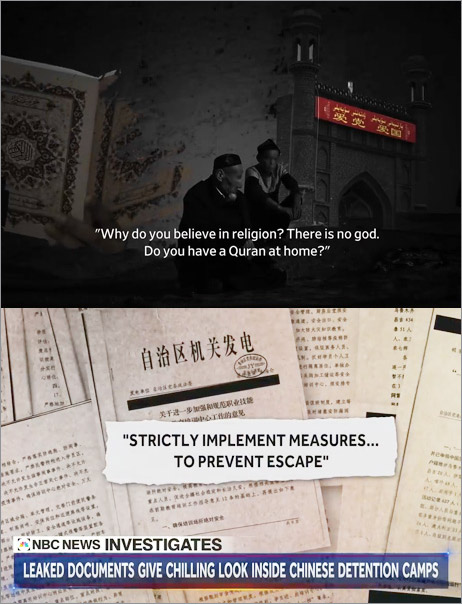 The Chinese government is now extending these repressive “reforms” to Xinjiang, an autonomous area in Western China and home to approximately 11 million Turkic –speaking Muslims. As in Tibet, Beijing has infused the region with Han Chinese in an attempt to force the Uighurs, via an “ethnic unity” campaign, to assimilate into the Han culture. In 2017 the CCP began rounding up and detaining Uighurs and other ethnic Muslims including Kazakhs and Uzbeks, forcing them into re-education camps.  Initially the Chinese denied the existence of the camps and called them “vocational training centers” where ethnic populations can learn new skills. However, Uighurs who have escaped paint a dark picture of torture and rape as they are forced to renounce their faith, learn Mandarin and swear loyalty to the Party.

Outside the camps Uighurs are subject to intense surveillance in their daily lives. To this end, the Chinese use facial recognition cameras and QR codes (Quick Response) that have been installed on homes. This allows officials, with a quick scan of the code, to obtain personal details and check on the activities of the occupants. The Chinese claim this is simply a way to monitor the population and the delivery of services.

As recently as July, the Chinese ambassador to London, Liu Xiaoming, was shown footage by the BBC, authenticated by other governments and western intelligence services, of Uighurs kneeling, blindfolded with their heads shaven being pushed onto trains. The Ambassador would not explain the scene and said the people could be separatists or even actors from the US or other Western countries. He called the reports “lies of the century” and refuted claims that Uighurs are being mistreated. He also denied proven reports that China is conducting massive sterilization on women to control the Uighur population. The forced detention of at least 1 million Uighurs and other ethnic Muslims was condemned by 23 UN nations who called upon China to respect international laws, including the freedom of religion. 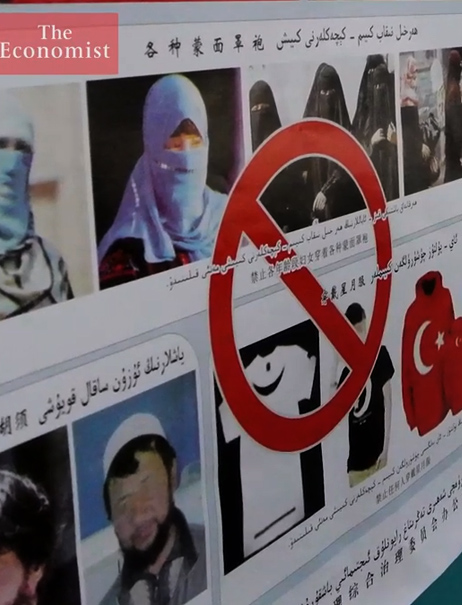 The Economist: How China is crushing the Uyghurs in Xinjiang.

This year Washington signed into law the “Uyghur Human Rights Policy Act of 2020.” This Act holds accountable “perpetrators of human rights violations and abuses such as the systematic use of indoctrination camps, forced labor, and intrusive surveillance to eradicate the ethnic identity and religious beliefs of Uighurs and other minorities in China.” In addition the U.S Treasury Department imposed sanctions on Chinese companies and farms in the Xinjiang region where many of the Uighur internment camps are located. The Global Magnitsky Human Rights Accountability Act gives the United States the ability to impose human rights penalties on individuals. In addition, the US House of Representatives passed a new and more comprehensive Tibetan Policy and Support Act, updating a bill last passed in 2002; this is now waiting to be passed in the US Senate. Included in the legislation is the right for the Tibetan Buddhist community, not Beijing, to choose the next Dalai Lama. The United States is also pressing to open a consulate in Lhasa.

While the autonomous region of Inner Mongolia has had a degree of autonomy and has not been subject to the police state tactics used in Tibet and Xinjiang, many fear it won’t be long until Beijing attempts to force assimilation onto its ethnic populations.  Inner Mongolia is home to 4.2 million ethnic Mongolians and unusual, wide spread protests broke out in August when the Chinese announced, a week before school opened, that language instruction in Mongolian would be replaced with Mandarin in three subjects for all minority children in elementary and middle school.  Young school children were not happy.  They chanted “Our mother language is Mongolian” as their school textbooks were replaced with Chinese ones.

Chinese repression in Tibet and Xinjiang also bodes ill for Hong Kong in the coming months. China’s new national security law implemented in the semi- autonomous city is vague but has broad, sweeping powers.  With its enactment, peaceful and legitimate protesters were rounded up; some were arrested for simply carrying political signs and flags.  The authorities can now claim these actions “endanger national security” as the law becomes a catch- all for offenses deemed a threat to Hong Kong’s security. As the CCP tightens its grip, the people of Hong Kong, particularly political activists, who face stiff prison sentences, are fleeing to Taiwan in dangerous sea conditions.

What do we take from this?

History shows us that nations large and small—democratic and autocratic—have sought to consolidate and homogenize the space they rule. In the US this was seen in the centuries-long struggle to incorporate the Native Americans into the dominant Anglo-Saxon polity. Teachers were tasked with Christianizing their students. In the 19th and 20th centuries Hopi Indians, for instance, were sent from reservations to boarding schools, often against their own and their parent’s wishes to become wards of the state—an experience common to many Native Americans tribes.  Similarly, the experience of the Maoris of New Zealand reflects the same education issues as Native Americans and Tibetans. The education policies for the Maori reflected an official policy of assimilation based on the assumption of European superiority and colonization.

Thus China’s policy toward ethnic minorities is not unique. In each of these instances the inability to find an acceptable balance between the state’s desire for cohesion/control and the ethnic group’s demand for cultural and religious self-determination has brought only limited progress.   As nations embrace cultural diversity, China will encounter greater difficulty in pursuing these restrictive policies.  Global opinion has turned sharply against Beijing as China’s unyielding hand is seen in an ugly process of cultural deconstruction.  Washington’s global status is on the line. Long-standing American principles of free speech and assembly are implicitly challenged by China’s grotesque policies in Tibet and Xinjiang.  The United States must not surrender its moral high-ground on these questions to Chinese authoritarianism.