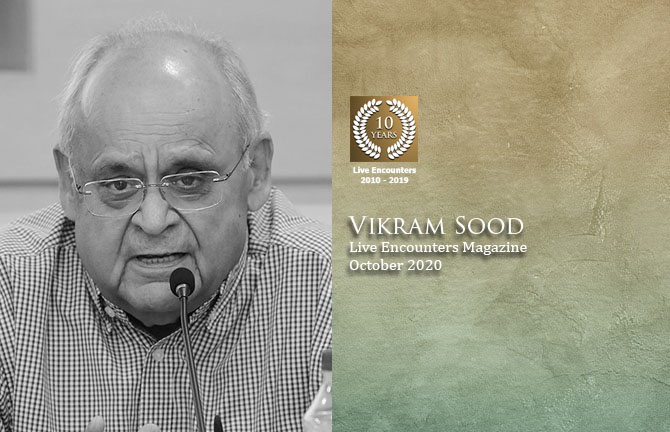 Vikram Sood was a career intelligence officer and served in the Research and Analysis Wing (R&AW) India’s external intelligence agency till his retirement in March 2003 after heading the organisation. He is currently Adviser at the Observer Research Foundation, an independent public policy think tank based in New Delhi. He has been regularly writing on intelligence, terrorism, security, foreign relations and strategic issues in journals and newspapers for the last fifteen years. He has contributed chapters relating to security, intelligence, terrorism and India’s neighbourhood, for various books including China and Pakistan, published in the last few years. He is the author of ‘The Unending Game – A former R&AW Chief’s Insights into Espionage’ published by Penguin Random House in 2018.  His second book – ‘The Ultimate Goal – A Former R&AW Chief Deconstructs How Nations Construct Narratives’ is scheduled to be released by HarperCollins India, next month. This article was originally published on Fair Observer.

Today, people’s rising aspirations often sit at odds with political stability. Impatience, dissent and violent protests can easily slip into insurgency and terrorism. Various state machineries stand guilty of weaponizing political disaffection in pursuit of political goals. These policies often result in blowback. Yet these short-horizon policies have mushroomed across geographies and ideological divides resulting in even more insurgency and terrorism.

So far, a comprehensive solution to this violence has been elusive. If insurgent groups are extreme, it is difficult to apply Nelson Mandela’s reconciliatory method. The tendency to call for peace negotiations at the first sign of ephemeral success usually rebounds on the state.

Politicians prize the urgent over important and thus feel pressured to deliver a “peace deal.” Such deals are used as breathers by insurgent organizations who mistake it for the weakness of the state. Ironically, the road to peace passes through the valley of war. Appeasement is a must avoid by a state if it wishes to succeed. There can be no lasting deal with insurgents unless they are first weakened. Insurgents have to be weakened by physical force, financial marginalization, destruction of safe havens, intelligence sharing and soft power before going the Mandela way.

A key element of the strategy to end insurgency and terrorism lies in “winning hearts and minds.” This is a complex challenge and the toughest to implement. Such an approach can only succeed on intergenerational time scales and cannot replace counterinsurgency in the short term, which many politicians and theorists often forget. 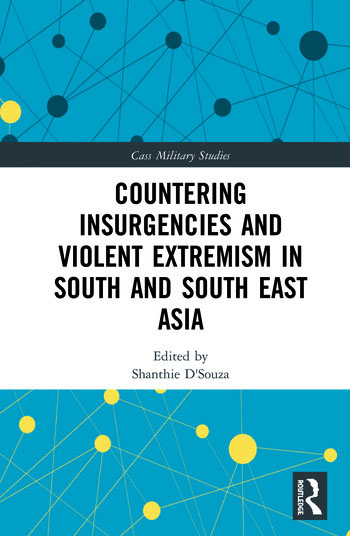 Extremism and Insurgency Are Complicated

For decades, experts and practitioners have argued about the best strategies to curb insurgencies and violent extremism. Shanthie Mariet D’Souza, a scholar with field experience in South Asia, has made an important intervention in the field. D’Souza has edited a book, “Understanding Insurgencies and Violent extremism in South and South East Asia,” on the subject that, in her own words, recognizes the complexity of “violent internal challenges” faced by countries in the region and engages in an “all policy-relevant work to enhance comprehension”.

D’Souza ably delineates the dilemma democracies face in countering insurgencies and terrorism. Democracies struggle with the politicization of national security issues. In addition, bureaucratic establishments get siloed due to the need to guard secrets closely and to keep important matters confidential. This contributes to interdepartmental rivalries and further complicates policymaking.

Reading between the lines, D’Souza makes an important observation. She highlights the problematic mix in most democracies. An indifferent and vacillating political leadership exists alongside an activist and biased media. This mix is the greatest impediment to a successful counterterror or counterinsurgency operation in most countries. The state also comes up short when dealing with insurgencies that use violence as propaganda by the deed and as an enabler for their ideology-driven movement.

D’Souza’s book is divided into four sections: “Emerging Challenges,” “Cautious Optimism — or False Dawn?” “Quagmires” and “Victory?” The book is an international, multidisciplinary endeavor for the serious reader and a useful guide to an important problem.

Of all the chapters, the one authored by Marvin Weinbaum titled “Insurgency and Violent Extremism in Pakistan” struck my eye. It is an unflattering account of the terror and insurgency situation in Pakistan. Things are dire. However, Weinbaum takes the view that Pakistan is unlikely to break apart “under the weight of provincially based insurgencies or yield power to radical Islamists.”

Weinbaum may be wrong. Bit by bit, Pakistan is making concession after concession to Islamists. In the past two months, the country’s radical actions have proved controversial. Islamabad stood idly by Islamic extremists destroyed a statue of Buddha that was accidentally unearthed in northwest Pakistan. Authorities stopped the construction of the capital Islamabad’s first Hindu temple.

The Punjab Assembly unanimously passed the Tahaffuz-e-Bunyad-e-Islam Bill 2020, which gives the all-powerful Directorate General Public Relations even more powers. It can now visit and inspect any printing press, publication house, bookstore and confiscate any book, before or after printing. The law has also “made it mandatory that the blessed name of Prophet Muhammad (Peace Be Upon Him) shall be preceded by the title Khatam-an-Nabiyyin or Khatam-un-Nabiyyin followed by ‘Sallallahu alaihi wasallam’ (darood) in the Arabic text.”

One might argue that such types of legislation may be token acts for winning over the religious vote. However, these small steps, one province at a time, indicate where Pakistan is headed. It demonstrates how Islamization is becoming increasingly entrenched and will not unravel easily. It is clear that the deradicalization of Pakistan is highly unlikely.

To be fair, Weinbaum acknowledges the direction in which Pakistan is headed. He writes: “South Punjab is the organizational home of several of the country’s leading jihadi organisations and most powerful Islamic movements, all of which aim to replace the current order with an idealised state governed by Sharia law. The province’s mosques and madrassas are among Pakistan’s largest and most influential, frequently serve up recruits for violent extremist groups, as do ostensibly non-political organisations like the Tablighi Jamaat, a proselytising movement preaching moral rearmament.”

The Pakistani military is aware of this phenomenon, but its relationship with the Afghan Taliban remains inviolable. Therefore, it cannot act effectively against jihadi organizations that serve up the cannon fodder for the Taliban.

These groups also act as appendages of the Pakistani state against India. Weinbaum points out how Jaish-e-Mohammed, an organization committed to waging jihad against India, frequently receives instructions from the Inter-Services Intelligence (ISI), Pakistan’s elite intelligence agency. This makes the ISI and the Pakistani state cannot act seriously against such an organization.

Given Weinbaum’s observations, it is surprising to see him conclude optimistically. He suggests that through the unglamorous but steady implementation of political, legal and social reforms, combined with economic improvements in the border areas, Pakistan could emerge from this spiral of fanatical Islamist violence. Weinbaum fails to outline how these reforms will come into being. Pakistan has fallen prey to the terrorism it has sponsored assiduously in its neighborhood for decades. Unless the country stops using terror as a tactic in its geopolitical strategy, Weinbaum’s conclusion about unglamorous reforms will remain a pious but forlorn hope.

Another section of D’Souza’s book that caught my eye is Dawood Azami’s chapter titled, “Countering the Islamic State in Asia.” In recent times, the Islamic State (IS) group has frequently targeted Afghanistan, Pakistan and India. The organization has sympathizers and volunteers in all three countries. One way of dealing with such a multinational insurgency is close intelligence, counterterrorism and counterinsurgency cooperation. This requires mutual trust and common strategic goals. Both of these conditions do not exist.

Unless Afghanistan, Pakistan and India can build trust and agree upon common goals, they will be unable to combat the new security challenge. An Islamic state in Khorasan — a historical term for modern-day Afghanistan and Pakistan — stretching all the way from Central Asia to Southeast Asia will keep extremists, radicals and fanatics busy. It is unlikely that IS militants in the Middle East will send volunteers to engage in this battle for Khorasan, a region often cited by Islamic fundamentalists. The group’s new model is akin to the American franchise system. The Islamic State group will rely on local franchises that will provide the manpower to fight this jihad. Azami is spot on when he asserts that the response mechanisms of the states in the region remain far from adequate.

Bibhu Prasad Routray’s chapter titled “India’s Fleeting Attachment to the Counterinsurgency Grand Strategy” is particularly relevant in the context of India’s current problems in Kashmir and the communist Naxalite insurgencies. In general, insurgencies must be tackled by local forces. In India, multiple paramilitary forces and the army operate in Kashmir, making coordination and unity of action difficult. The army has tried to win hearts and minds, but accusations of human rights violations have dogged it in the absence of a political solution.

Instead of using the army, Routray suggests that India should use a local counterinsurgency or paramilitary force in Kashmir. Using the army is counterproductive in the long run. In fact, real success in counterinsurgency is based on a political solution. The Indian states of Mizoram, Tripura and Punjab serve as good examples. The challenge with Routray’s suggestion when it comes to Kashmir is the involvement of Pakistan. India’s increasingly Islamized neighbor no longer wants a solution. Therefore, any discussion with Pakistan leads to a dead end and India perforce has to solve the Kashmir problem on its own.

D’Souza’s concluding remarks sum up the key problems of the region. Inadequate resources, inappropriate force mobilization, lack of united effort and weak political will have led to prolonged insurgency and an increase in extremism. Social, regional and religious fault lines add fuel to the fire. Insurgent and extremist groups have proved most adaptable. They have survived by splintering, lying low, exploiting peace deals or merging with other groups. Maoists in Nepal and Naxalites in India as well as the Taliban in Afghanistan and Pakistan have been around for decades.

Since the Taliban got involved with al-Qaeda in the 1990s, a local problem has become a global one. The attacks of September 11, 2001, brought the US to the region. Since then, eye-catching headlines have made the news while local issues or threats have been ignored. The counterinsurgency strategy of relying solely on violent and overwhelming force without a political component has not succeeded. We now need new insights. The scholars in Shanthie Mariet D’Souza’s book provide some valuable ones for policymakers and security professionals, which are most relevant and will remain so in the years ahead.