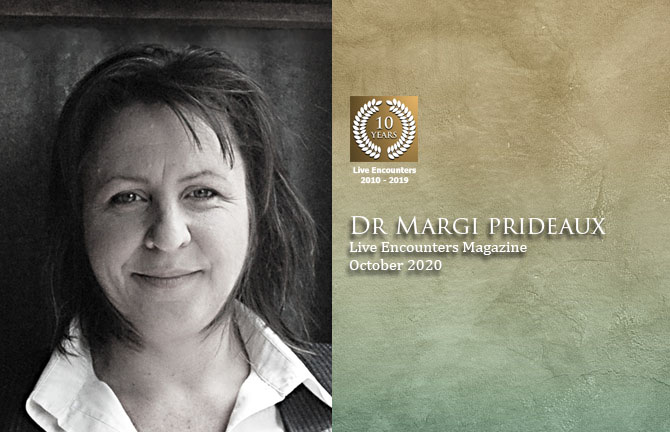 Margi Prideaux has written about wildlife, international politics and law almost every day for the past 27 years. As an international negotiator and independent academic, with a Ph.D. in wildlife policy and law, her words have been tuned to inform policy audiences in more than 20 different international conservation processes. She is the author of two nonfiction books, Birdsong After the Storm and Global Environmental Governance, Civil Society and Wildlife, and co-author of All Things Breathe Alike: A Wildlife Anthology. Along the way, her shorter musings have been published online at openDemocracy, Global Policy, Live Encounters, AlterNet, Wildlife Articles and Ecologist. www.wildpolitics.co Twitter @Wildpolitics

Our illusions about human superiority are shifting as scientists and philosophers explore the social complexity and intelligence of other species. At least some wildlife qualify as persons, creating tension in how we perceive the world.

For the past two decades, scientists have mapped the breadth and depth of communities or societies of dolphins, elephants, wolves and apes, among other species. They have recognised social complexity and intelligence. Their results have been startling, even to the researchers. Despite preconceived Judaeo-Christian notions of human superiority, scientists have discovered that many species engage in complex social interactions with each other. A tantalising insight emerges – that knowledge transmission exists beyond humans. Our assumption about our superiority is undermined.

Until recently there were only a small handful of academics willing to speak openly about this subject. Speaking out confronted, sometimes violently, the inherit bias of human superiority in western society. Being vocal risked accusations that tarnished reputations; brought scientists into conflict with deeply conservative religious views; or risked association with radical activists.

Five years ago when I published a mainstream review of the latest knowledge about dolphin culture,[1] online commentators labelled my article ‘preposterous’ and ‘outrageous’. That reaction was only a sliver of what the scientists at the time experienced. Despite the difficulties, the commitment of scientists has continued to grow.

The last decade of studies into dolphin, elephant, wolf and great ape behaviour has highlighted how complex their communications are. It is difficult not to draw parallels with human communication. Empirically, their brains have many key features associated with high intelligence. We have underestimated their capacity, and while their intelligence is different in form, it is difficult to dismiss. Scientists can now confidently state their findings as scientific and justifiable, speaking over the accusatory claims that have sought to dampen them.

The high-profile studies on the great apes continue to lead the field, but there is progress for other species too. For instance, Lori Marino’s informed position is that dolphins have distinct personalities, a strong sense of self, can think about the future, and have the innate ability to learn language; both their own and a rudimentary symbol-based language created to bridge the communication chasm between dolphins and humans. She asserts that because of their complex intelligence, it is morally wrong for us to treat them in psychologically harmful ways; that they are due our respect.[2, 3] Luke Rendell and Hal Whitehead agree, having explored the presence and nature of cultural processes in whales and dolphins, as an independent evolution of social learning and cultural transmission.[4, 5] Philippa Brakes and Mark Simmonds also believe the weight of science warrants a shift in global perception of this group of animals.[6]

Elisabetta Palagi and Giada Cordoni have found the social status among wolves is dependent on  sophisticated cooperative relationships and conflict resolution.[7, 8] These abilities have significant impacts on group dynamics in wolf packs. Other scientists are delving into the cognitive abilities in dogs and wolves and discovering they are similar to that found in humans.[9] Individual wolves share intentions – they understand each other’s mental states.[10]

Michael Garstang profoundly explores the existence of memory, morality, emotions, empathy and altruism, sophisticated communication and language, learning and teaching in elephants.[11] Karen McComb has presented evidence that elephants have the ability not only to identify human voices but also to identify specific cues in human vocalisations – broad age, sex, and ethnic identity – as a signal of potential threat to the herd.[12] Caitlin O’Connell has illuminated the complexities of elephant communities and communication abilities.[13]

Philosophers are also considering the implications of what this new knowledge means for humans. Thomas White has considered the ethical issues connected with human/dolphin interaction – for example, deaths and injuries of dolphins in the fishing industry or dolphins held in captivity. He contends that “dolphins have intellectual and emotional abilities sophisticated enough to grant them ‘moral standing’; they should be regarded at least as ‘nonhuman persons’”.[14]

Fellow philosopher, Kristin Andrews, agrees with White that other species deserve moral standing. She argues that non-human apes are “autonomous agents with their own projects that need to be respected”.[15] There is of course much more research than has been highlighted here. The science and the philosophy are clear. Yet, it is difficult information to resolve through the dominant political context of our time – the ‘sustainability paradigm’ – which premises all of ‘nature’ as a resource for humans.

This paradigm is not based on fact. It is born of the dominant Judaeo-Christian belief about human dominion and has been successfully imposed into every corner of the globe, complete with some uncomfortable ironies – a tree has become timber; a gorilla has become an ecotourism destination; a school of bluefin tuna has become a fishery. The inherent moral standing of any species is outside consideration.[16] The ripples of this paradigm have shaped new shorelines and a neoliberal market environmentalism agenda has become mainstream in the western world.[17-19] It values everything non-human as a resource to be used.[20, 21]

To reflect consciously on this emerging science we need to remove our well established, uniquely western, blinkers that are masking important information from view. Centuries of religious ideologies and the science informed by those ideologies has created an illusion of space between ourselves and other animals. Through a tradition that reaches over 2000 years to both Greek philosophy and Judaeo-Christian religious doctrines, a western idea of human exceptionalism and unique dignity has developed.[22]

Despite the knowledge that humans are animals, our label ‘animal’ distinguishes them (non-human) as separate from us (human). We choose to believe there is difference, even though a biological one does not exist.

They are our wild kin. Even with Darwin’s compelling logic that similar traits should equal similar abilities – that differences in cognitive abilities and emotions among animals are differences in degree rather than differences in kind – an unreasonable weight of evidence is demanded to prove the assertion that we are the same, rather than the more logical requirement to disprove our connection. The blinkers we wear impede how we consider the effects of our actions on other animals; animals that many non-Judaeo-Christian societies regard as having moral significance. These are human communities and cultures that we can learn from, if we choose to listen.

Those who live near wildlife share the wind and the rain, the dawn and the dusk, the ebb and flow of the seasons of their region with their wildlife community kin. They share the pain when their home is destroyed. People around the world reflect wildlife in their myths, symbols and rituals. Many call it a kinship with all life.[23] The wild tapestry of the Earth is better described as ‘a communion of subjects not a collection of objects’.[23] In Jainism, the spiritual well-being of human is tied to the physical well-being of all forms of life.[24] Buddhism encourages kindness towards animals and instils a sense of community with all sentient beings.[25] Rich and diverse animist worldviews also weave traditional environmental knowledge with the notion of personhood.

The Chewong of Malaysia consciously share the rainforest with other life-forms and have a sophisticated understanding of the fundamental difference and likenesses between humans and non-humans. The Chewong cosmos does not credit humans any superiority. Freed of such partitioning, they believe that different species poses their own ‘med mesign’, or ways of seeing. Each animal species in the forest inherits a med mesign that is different from others species. In their moving account, Peter Knudtson and David Suzuki explain “[t]here is a ‘siamang way’ of perceiving the world. A ‘tiger way’. A ‘fruit bat way’. A ‘hornbill way’. A ‘monitor lizard way’. A ‘tapir way’. An ‘anteater way’. A ‘slow loris way’. An ‘elephant way’. A ‘water snail way’.” The distinct sensory worlds of the exquisitely adapted species within the lush Malaysian jungle is fully recognised and respected.[26]

The Mentawai in Sumatra, Indonesia, do not believe they have a right to kill, consume, or use any animals at will. The Mentawaians are generous toward non-humans, crediting a soul and personhood not only to animals and plants, but to almost all of their surroundings.[27] There are rituals performed when killing animals for human food that confer a deep respect for and connection to that soul.[27]

In describing the animistic traditions of the Lakota, Cree and Salish peoples of North America, each embedded with a deep respect for non-human persons, John Grim highlights the inherent tension in arguing the sustainability paradigm:

“… where indigenous peoples have maintained these anthrocosmic rituals focused on animals, sustainable bioregions are evident. These sustainable fields break down where historical events have brought invasions of peoples, ideas, and ways of interacting with the surrounding world that fragment indigenous knowing and being known by animals.”

Despite our common misuse of the word, ‘person’ is simply a legal concept that affords basic rights to a group of individuals. In the west all humans are now considered persons (although not so long ago women, children, non-landowners, minorities, slaves and other unfortunates were not). While in common speech we interchange the term ‘persons’ with ‘people’ or ‘humans’, they are not the same. A person is actually any individual being – elephant, human, clone, entity from another galaxy – that we respect enough to confer them a basic moral right. We respect their right to live a meaningful life, to have their individual liberty protected and to be free from torture. No one in these emerging scientific and philosophical fields suggest that wildlife be granted a right to vote, to hold a driver’s licence, or to receive a free and fair education. Such knee-jerk arguments simply reveal a poor understanding of the core meaning of a ‘right’.

I don’t propose the west shifts its religious philosophies either. I only seek to highlight that these philosophies are born of belief, not facts. I mean to unlock the potential for people to look at the world in different ways – for people to see the forests, the tundras, the skies and the oceans are filled with many forms of non-human persons.

I don’t discount or dismiss the tension this discussion creates. I welcome it. Such tensions propel humans to explore more layers to our existing world view. We can learn from the scientists as well as the Mentawai, Chewong, Lakota, Cree and Salish peoples and accept wildlife as persons. Adopting new ways of seeing our wild kin may help us find our way out of the spiralling destruction we are committing across the world.

Profound? Yes. Preposterous or outrageous? I don’t think so.