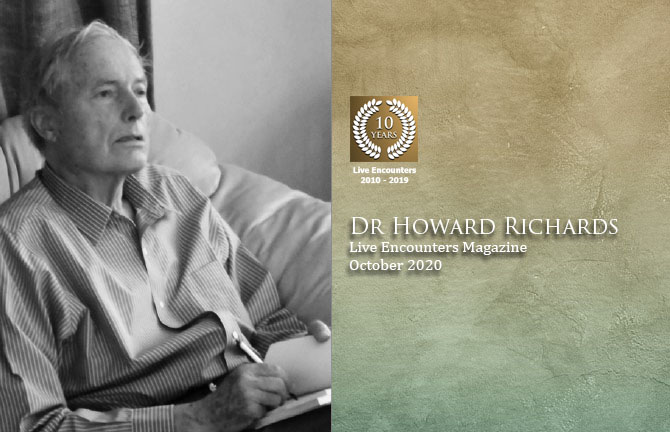 Dr Howard Richards (born June 10, 1938) is a philosopher of Social Science who has worked with the concepts of basic cultural structures and constitutive rules. He holds the title of Research Professor of Philosophy at Earlham College, a liberal arts college in Richmond, Indiana, USA, the Quaker School where he taught for thirty years. He officially retired from Earlham College, together with his wife Caroline Higgins in 2007, but retained the title of Research Professor of Philosophy.  A member of the Yale class of 1960, he holds a PhD in Philosophy from the University of California, Santa Barbara, a Juris Doctor (J.D.) from the Stanford Law School, an Advanced Certificate in Education (ACE) from Oxford University (UK) and a PhD in Educational Planning, with a specialization in applied psychology and moral education from the Ontario Institute for Studies in Education (OISE), University of Toronto, Canada. He has practiced law as a volunteer lawyer for Cesar Chavez’s National Farm Workers Association, and as a specialist in bankruptcy.   He now teaches philosophy of science in the Doctoral Program in Management Sciences at the University of Santiago, Chile, and co-teaches “Critical Conversations on Ethics, Macroeconomics and Organizations” in the Executive MBA program of the Graduate School of Business of the University of Cape Town, South Africa. He is founder of the Peace and Global Studies Program and co-founder of the Business and Nonprofit Management Program at Earlham. Dr Richards is a Catholic, a member of Holy Trinity (Santisima Trinidad) parish in Limache, Chile, and a member of the third order of St. Francis, S.F.O  https://en.wikipedia.org/wiki/Howard_Richards_(academic)

A compassionate realist acknowledges the delusions present in the participants’ rhetoric about CWP at Orange Farm:  Delusions about how many jobs there are (“Many people are excited about the new mall. People are thinking about job opportunities.”). Delusions about public employment being a temporary stopgap until participants find work and exit (“We do not want to see a participant remaining a CWP participant—we want them to exit the programme and open space for other needy people to benefit from it.”). Delusions about the power of education and training to guarantee employment (“Most of them are saying why you don’t take us to school to learn things like welding and plumbing? If I could do such a thing and get a certificate I would be fine.”). And so on.

But delusions often have positive social functions. People whose self-esteem is so high that they overestimate the probability of their success are likely to become optimists. Complete optimists are people who, when in a single day they fail an examination, are dismissed from their employment, and dumped by their lover, hit the books to study for the next exam that very night. The next day, they are pounding the sidewalks with a CV in their hand, a smile on their face, and their shoes nicely shined. The next evening they are flirting on Facebook.[1]

People whose self-esteem is so low that their estimate of the probability of getting a good job is close to the truth are bad news. They drain the emotional energy of their friends. They swell the ranks of the whiners, the depressed, the alcoholics, the addicts, the delinquents. Pessimists may have truth on their side, but there is little else to be said in their favour.

CWP in Orange Farm is different things for different people. It relates to illusions and to truth in more than one way. For young eager beavers CWP is perceived as a pathway to a career. For the many rejected by the labour market CWP means dignity at last. Unlike many other public employment programmes, CWP provides support for participants for as long as they need it. It is a way of life for participants who find joy in service. However, for many men CWP is not an attractive option because it pays less than they need to get by. Men sometimes join, participate for a while, and then drop out.

Given a world where, year by year, there is a growing precariat[2] whose members, even if well-educated and have technical skills, never achieve steady employment, and where even people who do have steady employment most are poorly paid, [3] the observations of CWP at Orange Farm highlight two crying needs: (1) to create soft landings for the many young eager beavers who will inevitably be disappointed, and (2) to raise wages. ‘To raise wages’ means to raise wages in public employment programmes and to raise the wages of the poorly paid in general. The two are connected. As we saw in the chapters on India and Sweden, public employment guarantees provide a floor under private sector wages.

In the spring of 1972, Michel Foucault participated in a panel discussion (on life in the public housing projects in the banlieues of Paris) during which he described the global trend as one where the plebeians increasingly outnumber the proletariat.[4] The proletariat are the workers with steady jobs. The plebeians are the excluded. Intelligent policy makers will not waste time imagining a future when private for-profit employers offer good jobs to every person who needs one. They will accept the reality that in the present there are, and in the future there will be, dispossessed millions living on transfer payments or, worse, somehow subsisting without them.

But there is another reality that is also part of the world as it is. There are millions of optimists who believe they can get a good job or successfully run a business of their own. They want that. Their positive attitudes are a big plus for society. If, in the coming years, they are regularly frustrated, many will defect to the pessimists. Then there will be even more people with bad attitudes than the many we already have.

Creative, outside-the-box solutions exist that combine social support with private enterprise. One of them is the City of Johannesburg’s urban agriculture programme. Discrete subsidies make it possible for mini-entrepreneurs to enjoy the dignity of earning their own living. Rosario, Argentina has gone in the same direction as Johannesburg but further.[5] In Rosario every child development centre[6] has an agricultural adviser. A child development centre is a combination kindergarten, community centre, and drop-in study hall for older children. The families with children in the centre are advised on what food they can produce, even if it is only rabbits kept in a small space and fed on kitchen scraps. Private and public entities lend land for free. Private and public entities give free courses on everything from how to comply with sanitation laws to how to cultivate worms in compost. Free advertising touts the health benefits of the urban farmers’ organic products. They get free stalls in the municipal marketplaces. It is their business, but community support makes it possible.

So let’s hear three cheers for the cheerfully deluded! Instead of telling them that their dreams are likely to fail, let’s change the world to make it possible for more of their dreams to come true. Urban agriculture in both Johannesburg and Rosario represents a principle that can be widely amplified: the belief of the optimists that they can make it on their own can be gently brought into synch with economic reality through discrete subsidies. What is not possible in pure markets is possible in impure markets. Public policies and public sympathy can rescue not only the bodies of the poor but also their dignity.

[1] This literary image of the optimist is suggested by the cheerfulness of the young people at Orange Farm who treat CWP as an opportunity to start on the path of success. Empirical studies tend to show that optimism rewards the optimist only when it is moderate. See for example Puri, M., & Robinson, D. T. (2007). ‘Optimism and economic choice’. Journal of Financial Economics, 86 (1), 71-99.