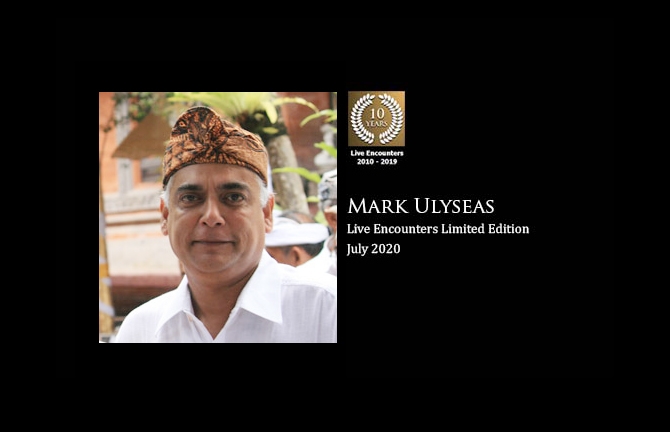 Mark Ulyseas has served time in advertising as copywriter and creative director selling people things they didn’t need, a ghost writer for some years, columnist of a newspaper, a freelance journalist and photographer. In 2009 he created Live Encounters Magazine, in Bali, Indonesia. It is a not for profit (adfree) free online magazine featuring leading academics, writers, poets, activists of all hues etc. from around the world. March 2016 saw the launch of its sister publication Live Encounters Poetry, which was relaunched as Live Encounters Poetry & Writing in March 2017. In February 2019 the third publication was launched, LE Children Poetry & Writing (now renamed Live Encounters Young Poets & Writers). He has edited, designed and produced all of Live Encounters’ 187 publications till date (July 2020). Mark’s philosophy is that knowledge must be free and shared freely to empower all towards enlightenment. He is the author of three books: RAINY – My friend & Philosopher, Seductive Avatars of Maya – Anthology of Dystopian Lives and In Gethsemane: Transcripts of a Journey.  www.amazon.com/markulyseas

When a black man is publicly killed by a policeman in the West all hell breaks loose. A black man’s life in the West is more precious than a black man’s life in Africa, or for that matter anywhere else(?). Perhaps that is why the Rwanda Massacre did not elicit a response from the very people who are presently resorting to arson, looting and mindless violence in the West. In the Rwanda Genocide 800,000 blacks were killed by other blacks in a 100-day spree of slaughter (https://www.bbc.com/news/world-africa-26875506). And this is just one example where blacks have slaughtered their own kind. But these lives don’t matter because they are not being killed in the West.

When the USA and Britain invaded Iraq, bombed and all but destroyed the country, which resulted in the deaths of hundreds of thousands of people, there was a deafening silence by those presently violently ‘rising up’ against racial discrimination in the West. Where were these people then?

When terrorists attacked a media office in Paris and killed people Face Book was flooded with ‘Pray for Paris’. Where was the grief or even a semblance of genuine concern for the people of Iraq, innocent people who had done no harm to either USA or Britain?

When Libya was deliberately dismantled by Western powers not much happened on the streets of the West to protest such action. Now, black slaves are sold in open markets in Libya for as little as 200 dollars. https://time.com/longform/african-slave-trade/. Where are Obama and Hilary Clinton who spoke eloquently about ‘civil & human rights’ with emphasis on the Middle East?

When Obama accepted the Nobel Peace Prize for doing nothing and spoke about a ‘just war’, increased bombing in Afghanistan etc. he was greeted with standing ovations. His drone campaign killed many innocent men, women and children. Obama ended his bloody reign by dropping over 26,000 bombs in 2016. https://www.theguardian.com/commentisfree/2017/jan/09

But Obama is eulogised in his country because he worked for the ‘benefit’ of his country, not the world and because he was black US citizens could shrug off the white man’s burden as if the country’s historical wrongs could be absolved by his election to the most powerful office. What he did in the international arena was, tragically, of no concern to the citizens of his country. This has been the modus operandi of US Presidents since John F Kennedy, who ‘authorised the use of deadly defoliant chemicals’ to be dropped on (then) south Vietnam, on November 1961.
https://repository.library.georgetown.edu/

Today over three million Vietnamese are maimed, the second generation of horrible and genetically disfigured children. But no one in the West appears to be too concerned about this.

What a shame. Their lives are of no matter.

None of these so called mass murders can be deemed a holocaust for this term is exclusively reserved for Europeans and what happened in World War Two in Europe.

And why should one stop here? The West continues to lecture all countries about equal rights and the much abused phrase ‘human rights’, while it has ‘factorised’ the production of animal body parts on an industrial scale. Abuse of farm factory animals in inhumane conditions has been extensively documented across the USA, UK and the European Union.

Some facts of U.S. farmed animals.

So it would appear that the lives of animals in farm factories in the West and those of people in the rest of the world are in the same category – disposable.

And then we have slavery.

The toppling of statues by sanctimonious crowds who feel they can erase history by their actions have failed to understand the very basic nature of their present culture – profit at any cost.

An Irish relative suggested that the statues should remain but a ‘bio’ added to each one to educate all about the horrendous actions of the exalted figures. This, in a way, would add a constructive perspective to enlightening present and future generations in the West.

Interestingly, slave trade also extends to those who are pathetically underpaid by corporations…in many areas the minimum wage is not paid to bona fide citizens. We can conveniently ‘overlook’ the illegals that work on farms, and who are often held captive by ‘modern day slave traders’?

And then there is the lucrative business of buying and selling of underage children, some as young as a few years old, for the purpose of sexual exploitation. (The FBI’s Joseph Campbell says child exploitation in the US has reached near-epidemic levels – https://www.bbc.com/news/world-33592634 .)

Girls as old as 9 are being bought and sold – https://www.mercurynews.com.

Slavery was never abolished like some western countries would have the world believe. It has just taken on another ominous avatar.

Slavery has become institutionalised with the manufacture of products by slave labour in other countries and sold in the West. Purchase of these products makes the consumer complicit in the slave trade. Ironically, many of these consumers are out on the streets protesting against edifices of slave traders of the past.

The astounding statistics of cruelty towards farm animals, wild animals and blood sport (killing of wild animals and unarmed people of all hues) in the West, particularly in the USA, seems to defy all sensibilities commonly associated with a ‘civilised state’. But who speaks for all these living beings? And why is it that when words are spoken it is always in black or white, and not about true justice for all living beings?

Life is not only precious for some in a particular country. If reparations are to be paid to the descendants of slaves then all those enslaved today in the sex industry, farming etc. must all be recompensed. And further the descendants of black slave traders in Africa and present day traders in slaves must also pay their share… Justice for all or justice for none.

Selective indignation and rigorous enforcement of social labelling assists in creating a failed society/ State, preceded, of course, by a violent form of liberalism that now appears to be throttling true freedom by preventing any form of speech that faintly addresses inconsistencies of perceived virtues. A warped narration based on misinformation, disinformation, selective morality and twisted subjective truth is now fast becoming the ‘new normal’.

The mob has spoken, all must abide.